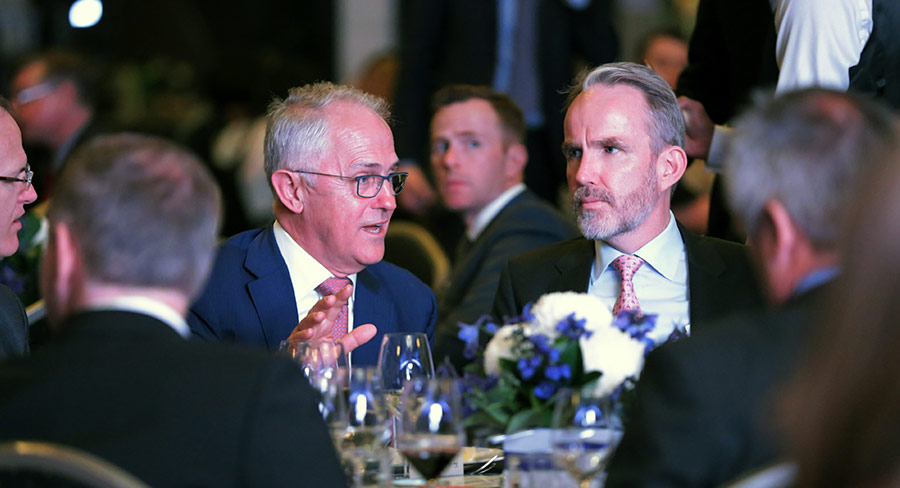 It is a fair drive in peak hour traffic from the News Corp Australia HQ at Surry Hills to the Bankstown Sports Club. However, it’s a trip that many editorial, advertising and management executives made on Thursday night for the fifth annual Project Sydney Go West campaign dinner.

Originally launched as Fair Go For The West, the event this year attracted a mix of leading federal and state politicians, local businessmen and students, and a mix of TV A-listers.

Scattered around the room were tables full of other political and media heavy hitters.

Seven was represented by Sydney news boss Jason Morrison, reporter Sean Berry and some of the cast from Home and Away.

Prime minister Malcolm Turnbull was the evening’s key speaker and addressing News Corp editors Dore and Carroll, he noted they both had big megaphones to communicate with NSW voters.

Referencing the famous Daily Telegraph front covers that dress politicians up in all sort of guises, Turnbull admitted: “Sometimes getting the photoshop treatment can be a bit confronting.”

Turnbull stopped for a (shortish) chat with Mediaweek, briefly recalling his days as communications minister. Amongst the PM’s entourage was former editor of The Australian’s Clive Mathieson, who joined the PM’s team late last year.

Both Dore and event MC Jonathon “JMo” Moran were the evening’s showstoppers.

Last year JMo hosted with The Daily Telegraph’s Miranda Devine, but this year he was going solo. He did a great job, even if there were a few too many references to how big a multimedia superstar he was.

Daily Telegraph editor Dore was the only speaker to try his hand at stand-up and he got away many zingers. He played it straight for part of his speech talking about a room full of proud Westies and bright young sparks from the region.

He then unloaded on Bill Shorten for his non-appearance, wondering what might have kept him away.

Dore said Shorten thinks the paper is too tough on him. “Holding politicians to account is a fundamental role of the media in a democracy,” said Dore.

He then noted they are not just looking for negatives. “We have a mission to push politicians to be ambitious. We do identify problems, which we are pretty good at, but we also help find solutions.”