Returning to the News Corp offices on Holt Street in Sydney was like “homecoming” for Christopher Dore. In the first wave of major editorial changes late last year, Dore was asked to vacate the editor’s chair at The Courier-Mail and move back to Sydney to edit The Daily Telegraph.

“The Telegraph really moves the dial when it takes up issues, reports or breaks  big stories,” Dore told Mediaweek.

Early in the conversation, Dore dismissed the debate about print losing its grip in the Australian market.

“There is a really prominent place for print in our media landscape,” he claimed.

“I always laugh when I see critics on social media have a go at The Telegraph and other newspapers for what we are doing. A part of the line is, ‘Oh, no one is reading them anyways.’ Then when we do a front page that they don’t like they go crazy about it.

“They can’t have it both ways,” Dore chuckled.

To back up his argument, Dore turned the tables by turning into an interviewer for a brief minute or two.

Dore: “Tell me, how many newspapers do you think we’ll sell of The Daily Tele this year?

“People are reading, people are noticing and newspapers make a difference,” he stated. 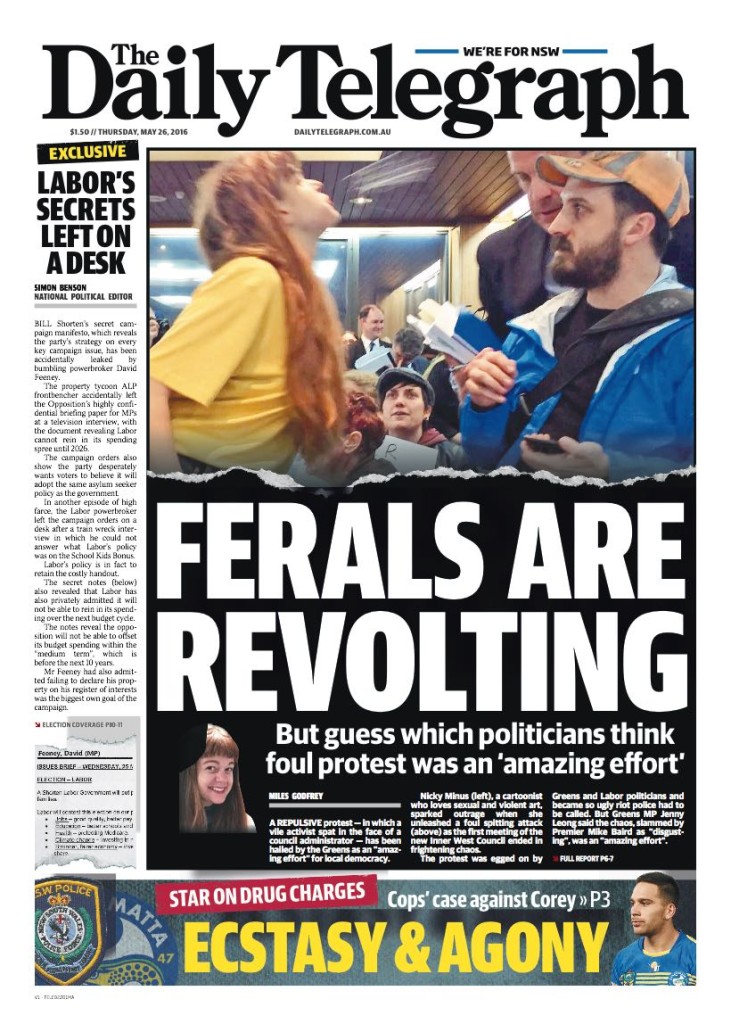 One of the most common things newspapers cop flack about from readers and non-readers alike is their political stance.

“The criticisms of the masthead coming from some people on Twitter are essentially from the people who don’t read us.

“They will see something controversial that one of our columnists has written and will jump on that. They are not buying the newspaper, because they might be from other states or are not our readers – and never will be. They still have this noisy voice and will carry on about what we do.

“We have a wide and varied selection of columnists. We have Miranda Devine and Tim Blair, as well as Mark Latham and Cate McGregor. The breadth of our commentators across the political spectrum is unrivalled – yet no one really sees that.”

When it comes to covering elections it’s customary for every masthead around the world to endorse who they think is the right candidate, Dore said.

“There has been criticism in some of the recent election cycles from people on social media about what has been a 100-year-old tradition of newspapers. The day before the election every newspaper in the world gives a position on who they believe is the right party to govern.

“However, to some people on social media it is apparently a great disgrace that newspaper editorials should have an opinion.

“Our readers understand it. They understand our position on things –it’s very consistent. If we get it wrong, they tell us.

“It’s very difficult for us to be going against our readers on political issues, because we’ll lose the connection with them. If we are off on a frolic and they don’t understand us, that means we don’t understand them. At the heart of what we do is, ‘What do our readers think?’ 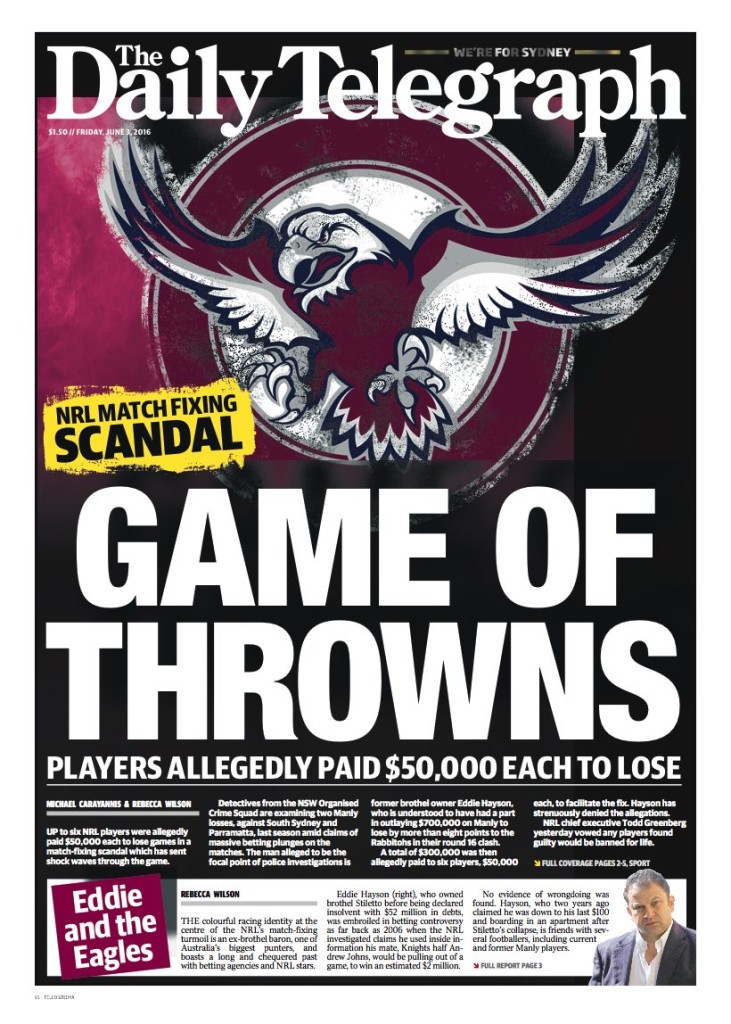 “It’s funny that the loudest voices of people these days are those who are a bit removed.”

One of the things that Dore credits himself with doing at the mastheads he has edited, be it The Courier-Mail or The Daily Telegraph, is producing provocative front pages.

“I brought a different sort of outlook to The Courier and wanted to really turn the dial up,” Dore explained. “That’s what I did in terms of owning the tabloid tradition. The Courier was a little bit stuck between a broadsheet, a compact or tabloid. What I brought to it was a clear approach, which was ‘We are a tabloid.’

“This is also exactly what I’ve brought to The Telegraph. The page one strategy is really critical to me.

“The front pages that really have an impact are the ones that get picked up.”

He explained: “People are getting their news in many different ways during the day. We have a lot of exclusive stories on our front pages where we will be revealing something. The reality of the media landscape now is that we will publish that front page, and then the radio networks and television networks will report on it. The Daily Mail will steal it and publish it.

“What is important for us is to present those front pages in a way that if you come across our newspaper at midday – and you have already heard about what’s going on – you will see a front page that is so compelling with a clever headline that you are still compelled to pick it up.

“It’s not a new thing to have a compelling front page, but you have to come up with a way that the front page will last beyond the first news bulletin of the morning.” 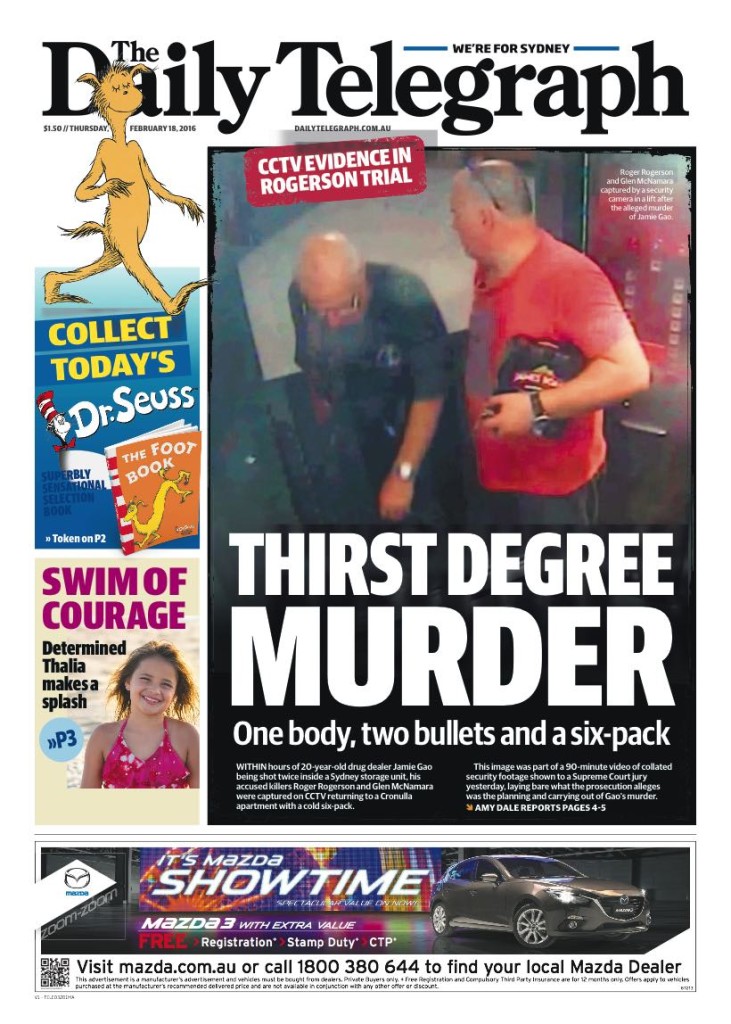 How Fairfax’s stance on print is hurting the industry

Fairfax Media boss Greg Hywood hasn’t shied away from letting the industry know about his thoughts on the future of print. This became more apparent when the publisher started laying off staff last month to cut operation costs.

While Fairfax is winding back its print operations to some extent, News Corp is taking a different route. It’s investing more in print, Dore said.

“Fairfax’s strategic positioning has had an impact on the industry and the attitude of advertisers to print, which is really disappointing and unfortunate.

“When advertisers invest in our print products they get results, because you get lots of people reading it and engaging with it at a high level.

“There are challenges around keeping those revenues and keeping the story together. There is a place, and a really prominent place, for newspapers in our media landscape.”