•  16.4 million Australians read newspaper media
•  Smartphones remain the fastest growing platform for news media in 2015, with readership on mobiles up 8% year-on-year to 3.6 million, according to the latest emma (Enhanced Media Metrics Australia) data

Total readership for regional mastheads is up 6% and readership of community mastheads across all platforms remains steady, up 1%. Total newspaper media readership is 16.4 million.

“The growth in newspaper readership on smartphones shows no signs of stopping, as newspaper publishers continue to innovate the way they deliver news via mobile, and audiences are responding to this. I expect we’ll see this trend continue well into 2016,” The Newspaper Works CEO Mark Hollands said.

“Despite the ongoing growth of digital, print newspaper readership remains strong, with 77% of Australians reading a print newspaper every month. This means that readers are accessing news content via a range of platforms depending on where they are. The November data also highlights the value of newspaper audiences for advertisers, as newspaper readers earn incomes significantly higher than people who don’t read newspapers.”

According to the emma data to November 2015, The Sydney Morning Herald finished as Australia’s highest reaching title across platforms (4.9 million readers). The Herald Sun followed on 4.117 million and The Daily Telegraph with 4.116 million. 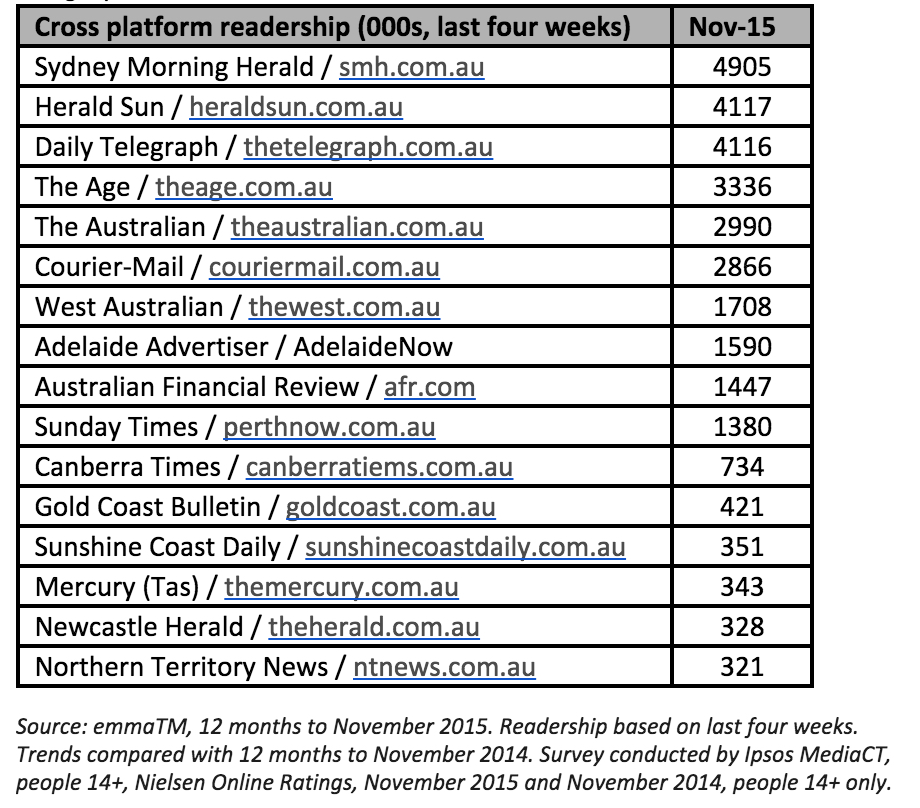 • The chief executive of News Corp Australia Peter Tonagh said:
“As we begin the new year, the latest emma data affirms News Corp Australia as the leading force in media, reaching 14.8m Australians or 82% of the population.
“Our national, metro and regional brands have twice the reach of Fairfax titles Monday to Saturday and more than three times the reach on Sundays.
“The emma data also shows how effective our publications are at reaching premium audiences – our home buyer audience has grown by 10% over the past 12 months, our audience of high net worth individuals with over one million dollars of investments has grown by 65% in the same time, and we now reach 90% of all Australians with a personal income of $120,000 or more.
“In addition our digital subscriptions are growing strongly – we now have over 300,000 digital subscribers across the business – and news.com.au has now spent 15 consecutive months as Australia’s number one news site.”