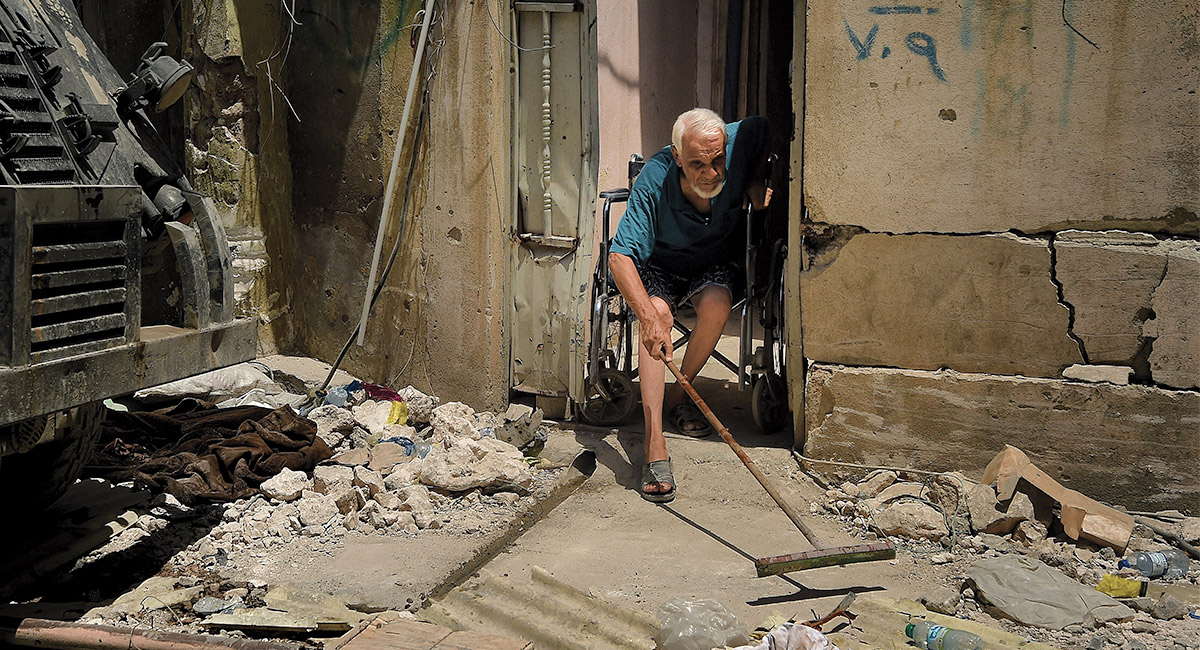 Fairfax Media journalists Michael Bachelard and Kate Geraghty made two trips to Iraq in the first half of 2017. The purpose of the visits was simple: to tell the stories of the locals living in the city of Mosul recently liberated from ISIS.

“It is the city where [Abu Bakr] al-Baghdadi, the leader of IS, declared what he was running was a caliphate and that Muslims from around the world should come join him. So it was also somewhat a spirit centre of ISIS territory. Therefore, the campaign to re-take the city was always going to be big news,” Bachelard told Mediaweek. While many news outlets had covered the story, what Bachelard thought was missing was “the human dimension”. Therefore, he got in touch with Geraghty, who is a photojournalist. “We started agitating the editors to let us go.”

The process of getting to Mosul wasn’t smooth sailing. The editors at Fairfax had their concerns, which Bachelard said were fair. “They were rightfully concerned about the safety and security of staff,” he said. “But we ended up having full support and encouragement.” What came of the two separate journeys to Mosul, made in late February and June 2017, is a Gold Walkley-winning story titled “Surviving IS: Stories of Mosul”. The multimedia story gave an insight into the lives of the locals soon after the city had been freed from the ISIS.

“We had such strong material. The multimedia approach was the best to showcase that material,” Bachelard said. “One of the strongest parts of the package is the young boy called Hussein [Hatem] (pictured at right) telling his story in his own words on video.”

The boy talks about his 10-year-old friend being beheaded by IS in the school courtyard in front of all the pupils. Hatem is captured saying: “My friend, he told me, ‘This will be the last time I see you. I have a feeling that I will die.’ I said, ‘Why will you die? I hope you don’t die. I wish it was me instead of you.’” During a recent SMH Live: A Year in Review event, Bachelard called Hatem’s story one of the most powerful to come out of the two trips to Mosul, which totalled two and a half weeks.

This was the first time Bachelard had reported from a war-torn area. However, he’d previously reported from grief-stricken areas when he was working as the Indonesian correspondent for Fairfax Media. This experience had helped him grapple with what he witnessed in Mosul. However, most of all what helped was having a colleague like Geraghty there. They would talk on most days about the day they’d been through. “But really, the people who are really suffering these things are the people who live there and those who need to make a life out of the rubble that remains,” Bachelard said. “That really puts into perspective about who is doing it tough. And it’s not me. “I feel a real sense of mission about telling these stories in a way that people can relate to. That is important.”

It is this sense of purpose that eased any concerns that Bachelard had before making his first trip to Mosul in February 2017. “I wasn’t in any way the first journalist to report from there, so there was plenty of information available,” he said, talking about the preparation that goes into making a work trip like this. Asked if he has any other trips in the works, Bachelard said that there is nothing on the horizon. “But I am sure Kate and I will be lobbying for another trip soon enough.”

With Geraghty away on an assignment in Bangladesh, Bachelard accepted the Gold Walkley at the 62nd Walkley Awards held earlier this month on behalf of the team. This was also the reason why Mediaweek was unable to speak to Geraghty about her win. “She is currently working on a story about Rohingya refugees… She’s gone right back into it,” Bachelard said. Talking about the awards night and the recognition that “Surviving IS: Stories of Mosul” received, Bachelard shed light on the unsung heroes from the journey. “Our ability to tell these stories is only allowed by the journalists we contact, who are on the ground. These guys live there and deal with the situations themselves. They come around with us, translate for us and find us case studies. They often don’t get mentioned in these things, but without them it’s impossible to do this kind of work.”