Fairfax Media’s The Sydney Morning Herald reviewed the year that’s been in sports, politics, economics and international affairs with a live subscriber event. The sold-out SMH Live: 2017 Year In Review event was held at The Star last night. More than 1,400 people attended.

At the start of the event, Davies thanked readers for their support throughout the year. She warned that while the night was about talking through the major stories from 2017, “it’s far from over”.

“Something tells me a few issues in Canberra will give us a few more headlines before Christmas,” she said.

Talking about the year it’s been for The Sydney Morning Herald, Davies told the audience: “It hasn’t been without its own challenges and you are all aware of those. But as I stand here today, we can be extremely confident about the future. After all, it is what this masthead has been doing for 186 years – why stop now?”

The pre-drinks for the evening started at 5:30pm. Guests were ushered into The Star Event Centre about an hour later. Davies came on-stage just before 7pm and there was no stopping after that. Sessions were back to back, only to be broken up by a showreel relevant to the segment. The night finished at 9pm.

The Age will be holding a similar event in Melbourne on 30 November 2017. 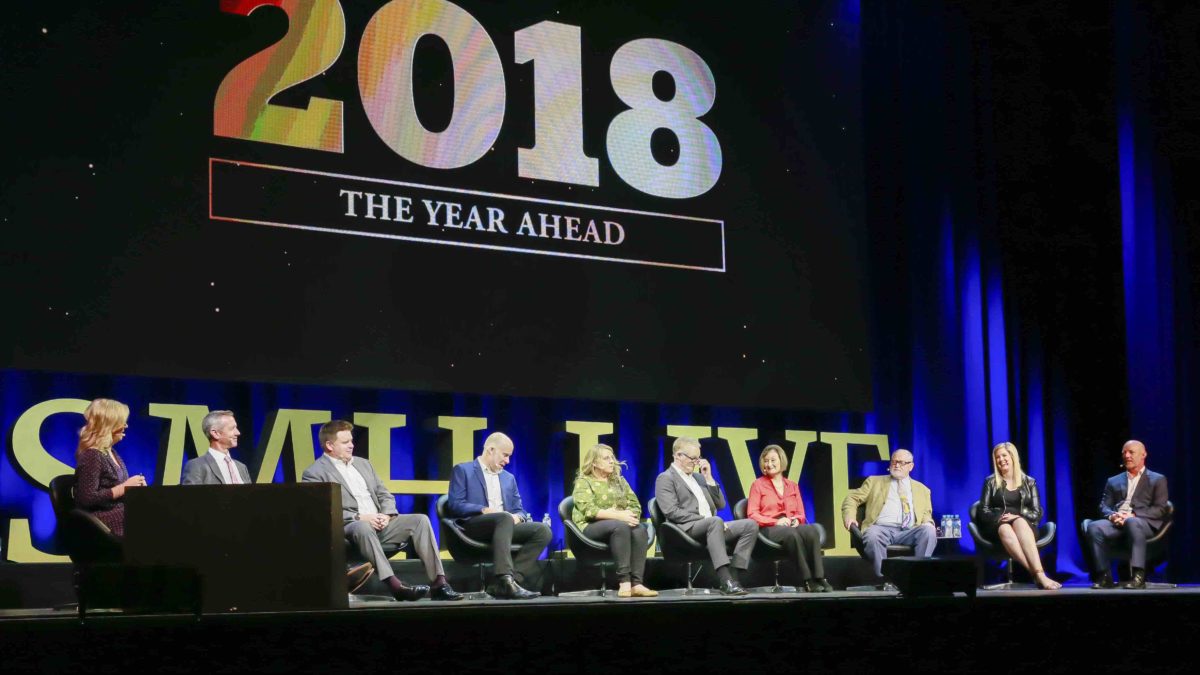 1. Peter Hartcher on the impact the first 10 months of Donald Trump’s presidency has had on young people: “I am now interested in Australian politics, because Trump has shown what can happen.”

2. Ross Gittins on Malcolm Turnbull’s political skills: “I have known Malcolm since we were both in the State Press Gallery in my first year at The Herald. I like Malcolm, I have always liked Malcolm and I still like Malcolm. I admire the man’s intellect. But I have been terribly disappointed by his political skills.”

3. Hartcher’s comparison of sex and politics: “Politics is like sex. You don’t need to be any good at it to enjoy it. Whenever I see one of them thinking how clever they are or watch Christopher Pyne giggling at himself, I have that thought.”

4. Photojournalist Kate Geraghty and foreign editor Michael Bachelard talked about their two trips to Iraq this year and what it is like to tell the stories of the people who live in war-torn areas. The pair did this by talking about Geraghty’s award-winning series of photographs, entitled Mosul, and explained the conditions under which the pictures were captured. Geraghty won third place in the professional editorial (war/conflict) category of the International Photography Awards earlier this year. She has been to Iraq eight times since 2003.
Bachelard admitted he’d never been to war until he made his first trip to Iraq this year. “The hardest part of the job is also the best part, which is telling stories of people who live in those areas. Sometimes they are very hard to hear,” he said.

5. Hartcher and Gittins on why Labor won’t call for a by-election any time soon:

a) Calling a by-election before Christmas would be “very unpopular” because “you’d be ruining everyone’s summer holidays”, Hartcher said. He also quoted an unnamed senior member of the Labor front bench, who told him: “We don’t want to call for an election straight away because we don’t want to look like dickheads all the time.”

b) Opposition leader Bill Shorten isn’t as confident as he portrays himself to be. The difference between the two party preference in the polls is very small. The gap can easily be filled during an election campaign.

6. Kate McClymont’s light-hearted take on her investigative work involving Eddie Hayson and Eddie Obeid: “I have a lot of lovely Eddies in my life.”

7. Sean Nicholls on NSW premier Gladys Berejiklian: “She was the perfect antidote to angst that had grown up around Mike Baird as premier. He had pissed off a lot of people. Gladys does exactly the opposite. She is bordering on timid in her approach to politics. She has got a reputation for backing down on the Baird government’s controversial policy issues.”

8. Kate McClymont on former Australian politician Ian Macdonald, who is in jail for corruption: “Ian Macdonald left his diary up in the Blue Mountains before he went to jail. And I don’t know why but it found its way to me. Inside the diary on the first page was a little inscription saying, ‘Tough times don’t last, tough men do.’ And I thought, ‘Where are you right now?’”

9. Malcolm Knox criticised the England and Wales Cricket Board for having a “weak” response to Ben Stokes’ involvement in a brawl that took place in Bristol a few months ago. A video of the fight emerged in September 2017. Stokes currently isn’t a part of the English squad for The Ashes due to impending investigations. However, he could play in game three of The Ashes series if he is cleared of the charges for causing actual bodily harm by the Avon and Somerset police. “I think it’s a disgrace that they would even contemplate bringing him here. They are remiss in not already having a cricket ban of at least one year,” Knox said.

No matter what the outcome from the police investigation, the English and Wales Cricket Board should take stricter actions to discipline such behaviour, Knox said. “Australia and England are both guilty of this. But right now it’s on England to not step back,” Knox said.