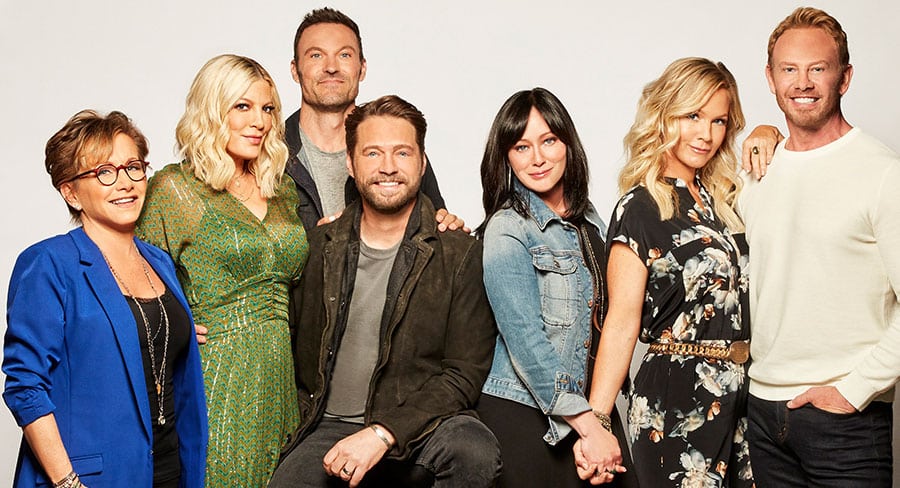 • This is Tori Spelling at her most likeable

What’s fun is that everyone (Jason Priestley, Tori Spelling, Ian Ziering, Jennie Garth, Brian Austin Green, Gabrielle Carteris, Shannon Doherty) is happy to send themselves up silly as they play heightened versions of themselves, and their characters. This is Tori Spelling at her most likeable, especially as she channels dad Aaron Spelling by producing the show within a show.

Shows about TV don’t really rate in Australia (or at least that’s what Seven always said when they ran 30 Rock at 11.30pm) but if The Masked Singer (Monday and Tuesday on 10) scores big, there could be a curiosity factor to watch BH90210 straight afterwards. The network is happily promoting the show as being “Back on 10” which makes me wonder why they have totally missed another iconic 10 title, which has had an even more successful reboot.

For months and months now, Entertainment Tonight (weekdays on 10) has been teasing clips from A Very Brady Renovation, which premiered on pay channel HGTV in the US last week to an astonishing 8 million viewers (while BH90210 only got 3.8 million on free to air Fox). CBS, which now owns 10, also owns The Brady Bunch franchise, so how did both of them miss the chance to grab a Brady version of The Block? Instead, it will air on Foxtel’s TLC from October 7, while the channel it shares a history with is airing the umpteenth repeat of Muriel’s Wedding (Wednesday on 10).

As Tim Ross says in The Pool (Sunday on ABC), we are all doomed if we ignore history. This riveting two-part doco, about Aussie swimming spots, has some important stuff to say about how the past should influence our future, particularly when it comes to community. Immerse yourself in The Pool, because it is a beauty.