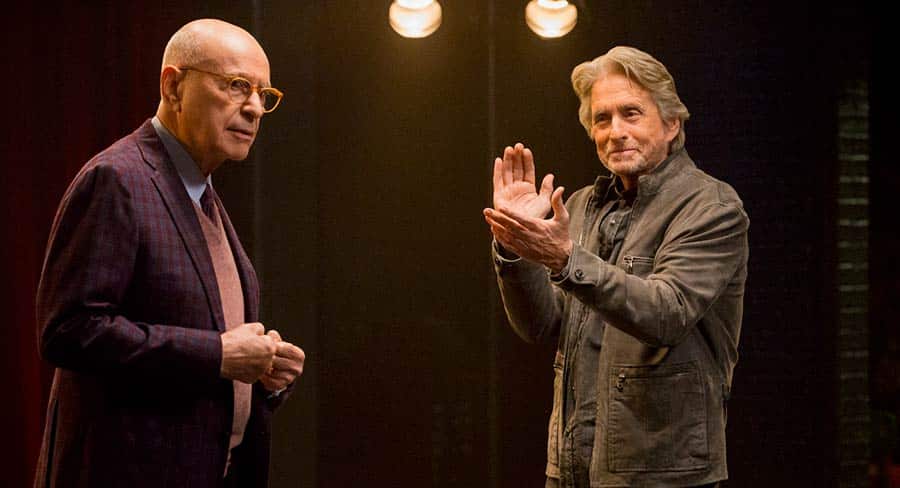 • This week: The Kominsky Method, Murphy Brown and Blake without the doctor

Some Netflix algorithm has decided that if you liked Grace and Frankie, you will also like its just-dropped series The Kominsky Method. Instead of Jane Fonda and Lily Tomlin though, this is about two male friends and, in casting Michael Douglas and Alan Arkin, this is instantly elevated to must-see for all those of a certain age.

It also means gags galore about things that older viewers can relate to. Grace and Frankie did a whole season about making vibrators for arthritic hands so in this one, it’s prostate problems that get a lot of airtime. But who’s complaining when the urologist is played by Danny DeVito, who reunites with Michael Douglas after Romancing The Stone, Jewel of the Nile and The War of the Roses (although no Kathleen Turner… yet), while Alan Arkin reunites with his Going In Style co-star Ann-Margret (look closely though because plastic surgery has rendered her almost unrecognisable).

The Kominsky Method is the first time I have ever watched a complete episode of a Chuck Lorre show, let alone an entire season (and it’s just eight half hours too). And despite it coming across as a little bit calculated, it develops nicely even though, just like Grace and Frankie, the lead characters’ narcissistic offspring are there to make the parents look less neurotic.

One show that eschews that cliché, however, is the Murphy Brown reboot, which starts on 10 next Monday. Thanks to an inspired setup, Murphy’s (Candice Bergen) now grown-up son Avery (Jake McDorman) is the anchor of a rival news show airing opposite to her, but this situation is not played for angst. Avery may report for a conservative network (think Fox News) but he’s trying to provide a more balanced centre and, since he’s still living at home, any conflict with his more famous mom is sitcom-sorted out quickly.

Murphy Brown goes after Donald Trump even harder than Will and Grace does. Her White House adventure in the second episode is more believable and funnier than Grace Adler (Debra Messing) becoming an interior decorator for the Oval Office, and the real footage of Sarah Huckabee Sanders is priceless (Hillary Clinton’s cameo, however, is somewhat clunkier).

Meanwhile, Seven is hoping older viewers will be tuning into The New Blake Mysteries, now not starring Craig McLachlan, and airing on a Friday night where the original series once cracked the magic million mark for the ABC. Nadine Garner proves to be more than capable of carrying this show on her own but the real mystery here is why Seven has grabbed two ABC murder mystery series and set them both in the “swinging sixties”.

Ms Fisher’s Modern Mysteries, coming in 2019, will be about the original Miss Fisher’s (Essie Davis) niece (Geraldine Hakewill). Only ratings will tell if she will ever crossover with former housekeeper Jean Blake (Nadine Garner) but it’s good to see that old is in, even though it’s sometimes called new.