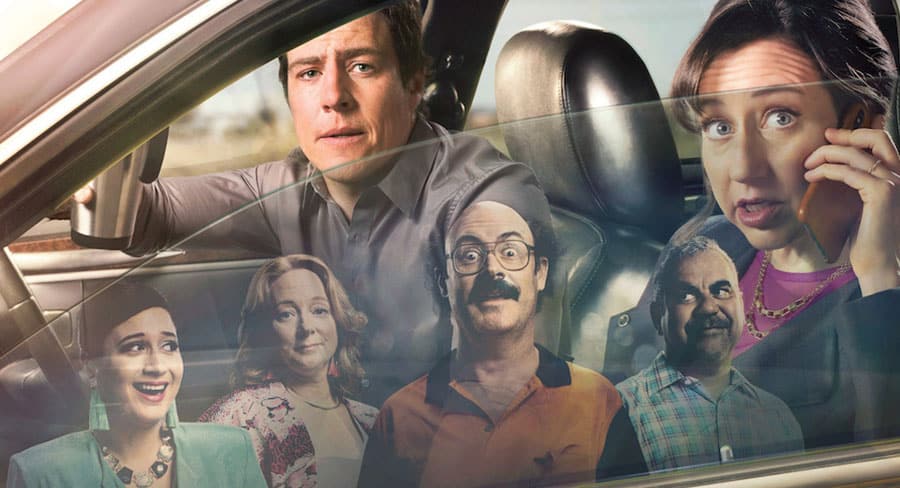 • Squinters must be ripe for an international adaptation soon

Stephen Peacocke fans will be thrilled that although Five Bedrooms has just finished on 10, he can still be seen every Wednesday night in Squinters (ABC).

This Aussie sitcom may have lost Jacki Weaver and Tim Minchin, but it has made up for it with a supercharged second season now featuring Justine Clarke, Genevieve Morris and Anne Edmonds (and they are all hilarious too).

TV Week might do another Stephen Peacocke article/poster/cover soon, because they deserve a good lie down after the Logies, and they are Brax obsessed (last seen on Home and Away in 2016, still in the mag on a regular basis). They should pump up the bit about him being in yet another on-screen romance with an older woman, because in Squinters it’s the fabulously messy US comedienne, Kristen Schaal.

Squinters must be ripe for an international adaptation soon, but look closely at its credits because there is actor, director and writer Wayne Blair contributing to the scripts. Probably his own too, given Bridget’s (Mandy McElhinney) appalling casual racism as she prepares to give birth to Gary’s (Wayne Blair) baby. Comedy gold though, and listen out for the Sunrise reference (ouch) which could be the start of an ongoing gag for Seven’s top rating breakfast show.

Mystery Road, which Blair starred in last year, is coming back on ABC, but given all its movies and series have always changed locations and cast, maybe it returns without him. He might be too busy anyway, what with a fourth series of Black Comedy and could there be a sequel to the year’s highest grossing Aussie movie he directed? Wishful thinking on my part, but everybody loved Top End Wedding and they would all come back for Top End Baby too!

Another wave of indigenous talent arrives this week with Robbie Hood (streaming SBS On Demand, Tuesday on SBS Viceland). It’s from Dylan River, son of director Warwick Thornton, and just like his dad’s breakthrough movie, Samson and Delilah, this web/TV series also follows impoverished black teenagers on the outskirts of Alice Springs. Robbie Hood has a much lighter tone, but is still audacious and optimistic, with incredibly natural performances from a cast of newcomers.

What will the shock jocks say when they learn that a public broadcaster has made a kids series littered with F-bombs? Actually, let’s hope they give cheeky Robbie Hood some publicity, because he should be widely viewed, and it’s an easy watch too at just one hour (six x 10 minute eps). Hugely impressive. More please, and hopefully for more than just an hour next time.