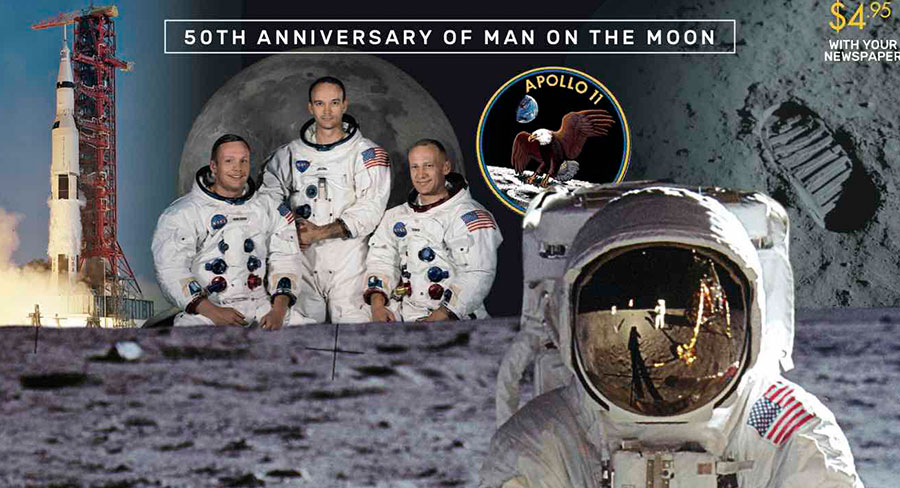 In celebration of the 50th anniversary of the Moon landing, and in partnership with CSIRO, News Corp Australia is publishing 60,000 copies of a 52-page glossy magazine, One Giant Leap.

Created by the Herald and Weekly Times partnerships and magazine division in Melbourne, One Giant Leap will be available for purchase with a copy of The Daily Telegraph, Herald Sun and Adelaide Advertiser from July 6.

The pictorially-driven commemorative magazine will feature the extraordinary achievements of Neil Armstrong, Buzz Aldrin and Michael Collins, with interviews from key people behind Australia’s role in broadcasting the historic moment to the world via the Parkes ‘dish’ in NSW.

Articles by News Corp journalists Simon Plant, Aaron Langmaid, Siobhan Duck and Mark Dunn cover ‘moon fever’, where 600 million people tuned in to watch the landing; a profile piece on the reluctant hero Neil Armstrong; views from two scientists from Parkes who are still alive today; an interview with operations scientist John Sarkissian on the significant global role the Parkes telescope plays to this day; exploration of the future of space travel and an unpacking of moon hoax conspiracies.

Ondrej Foltin, head of content, partnerships and magazines at News Corp Australia said: “One Giant Leap will take readers on a journey back in time to July 20, 1969, when the world watched, awestruck, as a miracle unfolded on their black-and-white TV sets.

“The tribute magazine, in partnership with CSIRO, will look back on that momentous day and ahead to the future, with content expected to appeal to a broad audience. We think it will be especially appealing to baby boomers who can remember the moment and school-aged children who’ll be intrigued by just how the moon landing was accomplished.

“One Giant Leap follows our hugely successful WINX tribute magazine, published in November last year, and a souvenir magazine commemorating the Royal Wedding of Prince Harry and Meghan Markle in May.  We are passionate about producing special edition magazines in partnership with brands and which celebrate momentous occasions. The golden anniversary of man landing on the moon is a great moment to remember.”

The marketing campaign supporting the initiative includes pre-recorded and live reads on metro radio stations, print and digital advertising, PR and social media marketing, and supported by editorial. In addition, News Corp is printing a giant commemorative poster to be given away free with the three participating mastheads on July 12-13.

One Giant Leap magazine will be available for purchase at participating retailers for six weeks from July 6 for $4.95, when purchasing a printed copy of the Herald Sun, The Daily Telegraph or Adelaide Advertiser.