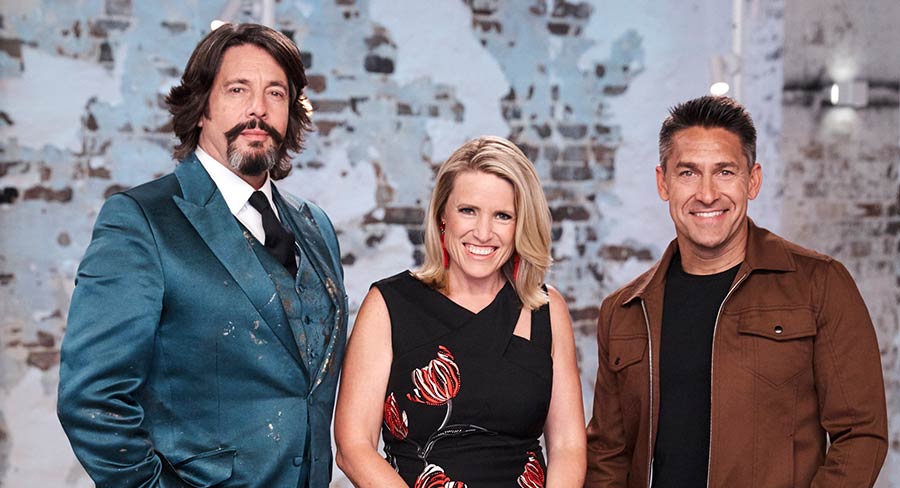 We should be clear from the outset: no one has damaged journalism and Australians’ ability to receive trusted, reliable information more than the big tech platforms, writes News Corp executive chairman Michael Miller in The Australian.

Their extraordinary profits are based on their unfair commercial exploitation of other people’s content – and powerful legislative changes are needed to correct this imbalance.

Platforms like Google should be banned from using content produced by publishers and the data generated from it until they negotiate a fair price for their use with publishers. News Corporation has made this point strongly in its submission to Treasury, which is currently considering the government’s response to the Australian Competition & Consumer Commission’s digital platforms inquiry.

News Corp’s submission outlines a blueprint for how Australia can show global leadership. However, we shouldn’t delude ourselves about the forces at play here. Be warned. We are already seeing intense lobbying from the likes of Google to present themselves as friends of journalism, an industry where they’ve sucked the life out of so many publishers while profiting from their content.

Don’t be fooled by their smokescreens: their sole aim is to convince lawmakers against curtailing their largely unregulated market dominance.

Foxtel and the Australian Broadcasting Corporation have announced an expansion of their long-standing relationship, with ABC iview to join the suite of on demand services available through Foxtel’s iQ3 and iQ4 set top boxes.

Foxtel CEO Patrick Delany said: “We are very pleased to be expanding our relationship with the ABC. It will see us extend the audience reach Foxtel has historically provided the ABC with the availability of both live channels and on demand content with the integration of the iview app into the new Foxtel experience.

“This will see ABC iview available in more than 1.2 million Australian homes with the iQ3 or iQ4 in November, alongside Netflix and the SBS On Demand app.”

ABC managing director David Anderson said: “ABC iview has been at the vanguard of video on demand in Australia since it started 11 years ago and it continues to be the leading free-to-air VOD service.

“It is great that iview will now be available directly through Foxtel, making it easier for subscribers to watch even more fantastic Australian content.”

The iview app on Foxtel will offer a catch-up service for ABC content including its popular shows such as Gruen and Old People’s Home for 4 Year Olds, together with much-loved ABC Kids programming like Bluey and Play School. The app also provides live streams of the ABC’s television networks.

Google chief executive Sundar Pichai says the technology giant is working hard to eradicate unacceptable content from its video-sharing platform YouTube but warns not all cases are clear cut, reports The AFR’s Max Mason. The reporter was speaking with the Pichai in California on a Google-sponsored trip.

“The amount of problematic content on YouTube is a very small fraction of the overall content we see on YouTube and how it’s used, but we still feel responsible for getting it right and [doing] better than where we are today,” Pichai told The Australian Financial Review in Silicon Valley last week.

Pichai said most videos were removed automatically before they were even watched and classifiers were becoming more accurate, allowing YouTube to scale up human review operations.

Venture capitalist Mark Carnegie and Wilson Asset Management chairman Geoff Wilson are in discussions to see if they can extract a better offer from Nine for radio broadcaster Macquarie Media, reports The AFR’s Max Mason.

Carnegie holds a 3.6 per cent stake in the radio broadcaster, home of 2GB and 3AW, while Wilson has built up his share to 4.7 per cent. Should Carnegie decide to take the current offer, Nine will have the required amount it needs to buy up the rest of Macquarie’s shares.

Time for an ABC ‘TV tax’? How to stop government interference

A licence fee is a good debate to have in the current febrile environment, writes Sydney Morning Herald and The Age economics correspondent Eryk Bagshaw.

Unfortunately, it has zero to no chance of getting started. You can hear the anti “TV tax” campaign firing up now.

For the sake of argument, let’s do the numbers. There are roughly 10.1 million households in Australia according to the Bureau of Statistics, divide that by the ABC’s $1.1 billion budget and you get $110 a year or $9.16 a month in licence fees.

[Begshaw recently travelled to Berlin as a guest of the German foreign office.]

In Germany, the Rundfunkbeitrag or “tv tax” is now up to €17.50 [$28] a month. Double the cost of a Netflix subscription. Households pay it like they do a water or power bill, with exemptions for students and some low-income households. Last year its budget reached €9.1 billion [$14.7 billion].

David Koch has confirmed he has re-signed for at least one more year alongside Sam Armytage at Sunrise, reports News Corp’s Briana Domjen.

“I have to say, I am having a great time,” said Koch, who spent the weekend at the AFL grand final in Melbourne in his other role as Port Adelaide’s club president.

“It’s quite amazing, really, to think that when I came on 17 years ago … I was only meant to be a fill-in host for three months.

“And now look at where we are.

“I think it’s a testament to the production team as well as the on-air team, really.

“And another part of our success is not getting too involved in the mechanics of the industry or getting sucked into the TV vortex bubble. I just try to have fun.”

Robert De Niro says he thinks Democrats had no choice but to open an impeachment inquiry into President Donald Trump, reports CNN.

“It has to happen,” De Niro told CNN Business’ Brian Stelter on Reliable Sources Sunday. He called the present political situation a crisis, “and too many people are too gentle and genteel about it. And we’re in a crisis situation, period,” De Niro said. Two days earlier, on the red carpet for the New York Film Festival opening night premiere of his new film The Irishman, De Niro told Variety he hopes Trump gets impeached. 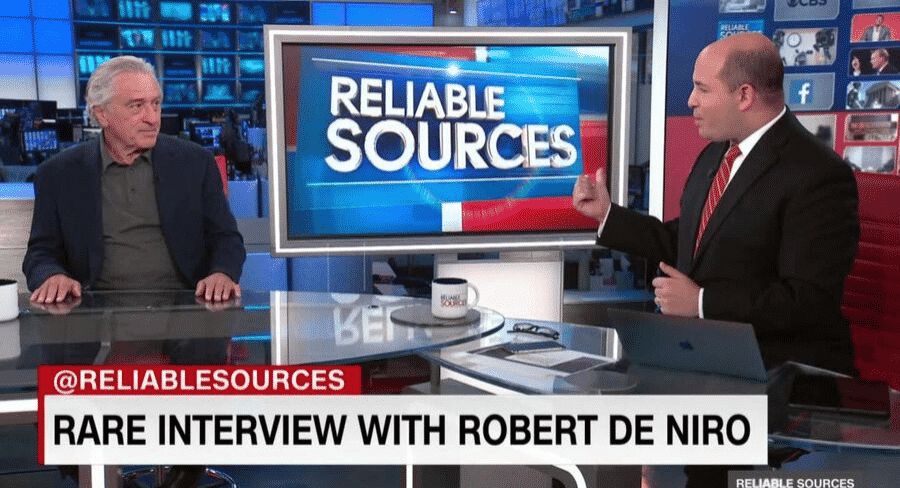 De Niro’s comments on Trump haven’t always been warmly received by the president’s supporters. While a speech at last year’s Tony Awards – in which he said “F— Trump” twice – was met with a standing ovation by the event’s attendees, it also prompted criticism from Fox News.

“F— them, f— them,” De Niro said to Stelter of his critics on Fox News, before theatrically apologising for cursing. When Stelter asked about his use of foul language to make the point, De Niro justified it by saying “this guy is like a gangster” and “we’re in a terrible situation.” He also said he thinks Fox News is responsible for propping up Trump.

“Some of these other pundits on Fox … I can’t believe that they would actually buy into this craziness. This guy is – should not be president, period,” De Niro said. “And this guy just keeps going on and on and on without being stopped.”

As recently as two weeks ago Moore indicated to Mediaweek she would be continuing her role on House Rules, but that is no longer the case.

Listen to Wendy Moore talk to Mediaweek about her future on the Media week podcast.

“After seven incredible years on the amazing show that is House Rules, it is time to say goodbye,” Moore posted on social media on the weekend.

“I have loved every single moment and am really proud to have worked on a show that has literally changed lives and inspired us all to take on big, scary challenges. I have made so many friends, seen so many parts of Australia and learnt so much that I will always be grateful to Channel Seven for.” 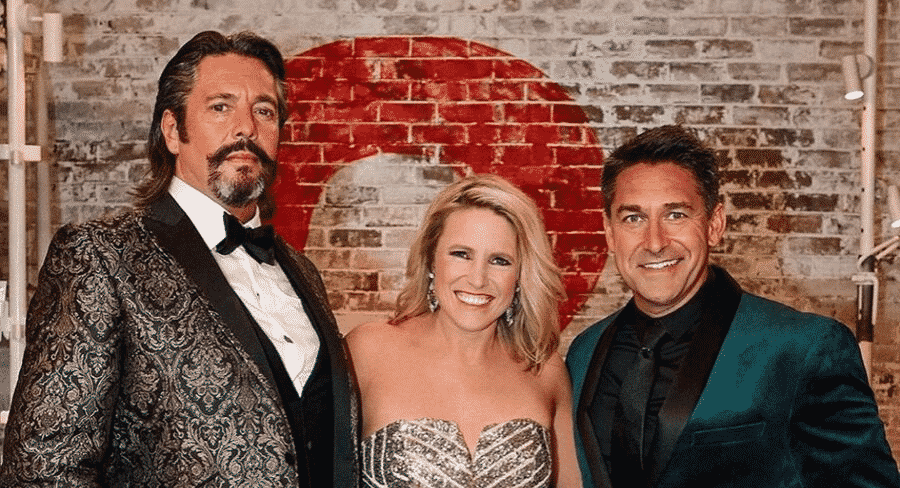 “Of course it’s always sad to see the end of such a great experience, I guess you could call this the #sevenyearitch – it’s definitely time, and my new role heading up the Lifestyle Channels Foxtel has been an absolute whirlwind over the last six months and I know it’s just going to get bigger and better as all of our new shows start rolling out next year.

“And just quietly, I’m pretty excited at the thought of a whole, uninterrupted, summer with my family for the first time in seven years!

“Thank you to everyone who has watched House Rules over the years – I’ll be watching season 8 along with you next year!”

Rove McManus: ‘I’m sure I’ll find myself back on TV’

Believe it or not, this year may yet prove to be one of the sweetest in the career of Rove McManus, reports News Corp’s Siobhan Duck.

Despite the fact he recently endured the disappointment of having his latest TV effort axed after just two airings, McManus has finally fulfilled his dream of becoming a cartoonist.

The three-time Gold Logie winner has written and illustrated two children’s books, largely inspired by an adoring relationship with his five-year-old daughter Ruby– a welcome achievement that has helped offset the bad news.

McManus has kept a low profile since the axing and even now, when pressed to discuss his feelings on the show’s demise, he declines to say much — though he will say its failure won’t keep him from trying to score another small-screen hit in the future.

“TV has been as much a part of my life as drawing,” McManus tells Stellar. “So I’m sure I’ll find myself back there again, too.”

Senior figures from rival networks expressed their dismay at the show’s demise, including Michael Pell, the executive producer of Seven Network’s Sunrise, who voiced concern that such a hasty decision could result in fewer attempts at creative live TV shows.

“It surprises me how some people talk about television,” Pell tells Stellar. “In other industries, the ceasing of production is usually met with disappointment; when it comes to TV, so often people applaud an axing if they didn’t like the show.

“Everyone’s entitled to an opinion, but often I think people forget these shows represent the livelihoods of hard-working professionals who put everything into their craft. They have families and mortgages like everyone else.”

Fresh from his celebrated performance as part of the pre-match entertainment at the Grand Final, Up There Cazaly singer Mike Brady signed off as the host of 3AW’s Saturday night show for the final time on the weekend, reports News Corp’s Fiona Byrne.

Brady’s departure from the Mike ‘til Midnight program, which has aired for 17 years during the AFL’s home and away off season, is the latest in a series of changes shaking up Melbourne’s powerhouse talkback radio station.

“I am delighted that 3AW gave me the opportunity to say goodbye to the people who have been so loyal over the years. Not all broadcasters get that opportunity.

“It has been a wonderful learning curve for me. I thought I knew a lot about radio when I went in and I knew absolutely nothing.”

ABC tipped to become FTA broadcaster for the A-League

The Football Federation of Australia could announce a new deal with the ABC, reports The Australian’s Media Diary.

An A-League game would be broadcast on ABC TV at 5pm on Saturday while the W-League would return to the network at 4pm on Sundays under a possible two-year deal.

None of the commercial networks bid for the rights so the ABC is also in the running to pick up free-to-air rights for Socceroos qualifiers and the Matildas international friendlies.

Fox Sports would continue to broadcast all A-League, W-League, Socceroos and Matildas matches via Foxtel, helping to meet a commitment to niche and women’s sports.