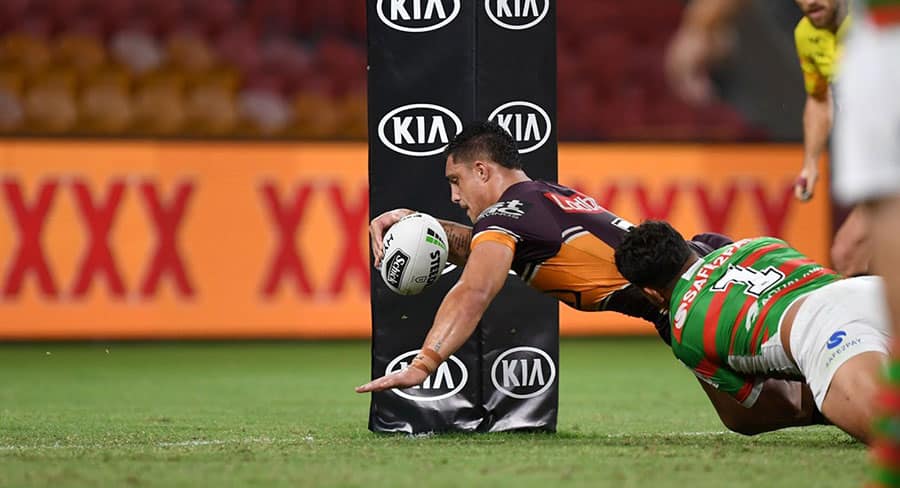 Hugh Marks warns Nine may walk away from NRL

Nine Entertainment boss Hugh Marks has declared he has “no deal” with the NRL over broadcast payments for the 2020 season, warning of a willingness to walk away from the code as the network looks to save $50m in sports rights deals, reports The Australian’s Leo Shanahan.

According to Monday’s presentation Nine expects to save $50m in broadcast rights of NRL and remaining cricket rights – including the Twenty20 World Cups – by the end of the 2021 financial year.

Nine’s free-to-air revenue in April was down 28.8 per cent despite maintaining the number one position in ratings, largely thanks to the performance of its hit show Married At First Sight. Marks attributed 9 per cent of that decline to the postponement of the NRL season.

Nine applies block and tackle to NRL in broadcast war

Nine says it hasn’t agreed to anything yet with the NRL as the broadcaster, Foxtel and rugby league try to salvage the 2020 season on mutually acceptable terms in a war of words over rights that threatens to transform the code and its TV future, report The AFR’s Sarah Turner and Vesna Poljak.

Nine has already paid 25 per cent of its rights fee this calendar year, for which it has received almost no value since the COVID-19 pandemic stopped matches, CEO Hugh Marks said on Tuesday.

Marks said the NRL needed to “get your head around” the fact that the most significant growth in its costs had been “off the paddock” and to dedicate yourself to “investing on the paddock, which is the clubs themselves”.

One avenue could be asserting control over the league’s digital assets, instead of the NRL competing with broadcasters by investing in its own platforms. “That can be facilitated through Nine, and through Fox Sports and by us supporting the NRL.com web site. We can do that a lot more cost effectively than they can.”

Fox Sports has begun preparing for the possibility of a future without Channel Nine, with the pay-TV operator looking to form an alliance with a rival free-to-air network to broadcast rugby league, report The Sydney Morning Herald’s Michael Chammas and Zoe Samios.

Such a move could see Fox win the right to screen rugby league’s long-coveted crown jewels, the grand final and three State of Origin matches, although the games would have to be simulcast on a free-to-air network to satisfy anti-siphoning legislation.

Foxtel already has a strong relationship with Channel Seven through its partnership with cricket and AFL, as well as racing through the Sky network.

Rugby league bosses are willing to contemplate a whopping five-year extension to their current broadcasting deals with Foxtel and the Nine Network as they look to future-proof the code and ensure their clubs and players have a billion-dollar backstop for protection, reports The Australian’s Brent Read.

On the same day Nine boss Hugh Marks warned the station’s love affair with rugby league may be coming to an end, News Corp can reveal the idea of a new deal that would secure the game’s broadcasting rights until the end of 2027 is in the mix.

There has been talk that contracts with Nine and Foxtel could be extended as part of those negotiations and it is understood rugby league officials are open to additional five years if that helps get a deal over the line.

The slow progress of broadcasting talks have delayed an announcement on the draw and hampered efforts to set the salary and football caps for next season and beyond.

The value of the AFL’s prized TV rights is tipped to fall as the sports media industry reels from the coronavirus crisis, report News Corp’s Michael Warner, Glenn McFarlane and Lauren Wood.

Experts believe the prospect of a cashed-up new player such as Amazon, Google or Facebook emerging at the bidding table has diminished.

A more likely move is a two-year extension with current rights holders Channel 7 and Foxtel.

But AFL Media, the league’s in-house digital business, could be significantly downsized as a result of the negotiations and refocused on supporting club websites.

For the first time in the game’s history, the price of the game’s broadcast rights is expected to fall. The current six-year, $2.56 billion deal, is worth about $418 million a season – a figure experts predict cannot be matched in the post-COVID climate. Talk of a two-year extension for current rights holders Channel 7 and Foxtel is strong.

Disney estimates $1b COVID-19 impact on parks, but Disney+ grows

Walt Disney executives on Tuesday afternoon offered the first look at the extent to which the novel coronavirus has crippled their once seemingly indestructible entertainment empire, reports The Hollywood Reporter.

The company’s earnings per share, excluding certain items, dropped 63 percent to 60 cents for the first quarter of 2020, below what Wall Street was expecting. Quarterly revenue grew 21 percent to $18 billion. Disney estimates that the coronavirus’s impact on Parks, Experiences and Products segment, hit hard by the global shutdown, was approximately $1 billion due to lost revenue.

“While the COVID-19 pandemic has had an appreciable financial impact on a number of our businesses, we are confident in our ability to withstand this disruption and emerge from it in a strong position,” said CEO Bob Chapek. “Disney has repeatedly shown that it is exceptionally resilient, bolstered by the quality of our storytelling and the strong affinity consumers have for our brands, which is evident in the extraordinary response to Disney+ since its launch last November.”

One bright spot has been the performance of Disney+, which forged ahead with its rollout in several European countries and India this spring despite global shutdown. The service passed 50 million paid subscribers in early April.

ViacomCBS has announced plans for a virtual US upfront, becoming the first media conglomerate to go ahead with something resembling a full-fledged presentation to advertisers, reports The Hollywood Reporter.

In a memo to clients and partners Tuesday, chief advertising revenue officer Jo Ann Ross detailed plans for “a series of short virtual presentations” showcasing the company’s assets on May 18 and 19. The “ViacomCBS Upfont @ Home” will take place a few days later than what would have been CBS’ traditional upfront on May 13. That show at New York’s Carnegie Hall, along with all other traditional, in-person gatherings for upfronts week, was called off in March due to the novel coronavirus pandemic.

“I planned to be – and frankly, I’d rather be – writing to you this time of year to invite you to one of our intimate upfront dinners or our annual celebration at Carnegie Hall,” Ross wrote. “Clearly, the current climate is different, but as they say at Carnegie, the show must go on!”

Disgraced TV gardening guru Don Burke has cemented his successful, but “ironic” defence of a defamation case brought against him dating back to an expose of his alleged history of sexual misconduct, reports News Corp’s Craig Dunlop.

The ACT Court of appeal on Tuesday refused an appeal brought by journalist Wendy Dent, who had previously lost a defamation case against the celebrity gardener.

Dent was one of a string of women who accused Burke of sexual misconduct, saying the once-popular TV gardener told her she had to go topless in an audition to work on his show.

In a subsequent interview on A Current Affair, Burke denied the claims, denials which Dent argued defamed her by portraying her as a “liar” and as being part of a “witch hunt”.

Joel Creasey ready to interview some of Australia’s biggest celebrities

For many of us, the coronavirus pandemic has provided the ideal opportunity to improve ourselves and broaden our horizons, reports News Corp’s Antimo Iannella.

But Australian comedian Joel Creasey admits he has managed to do the complete opposite in self-isolation. If anything, he is actually perfected the art of downskilling.

“I have not reorganised anything, I have not reconnected with old friends. I’ve had some really drawn out, petty arguments with my partner. I’ve rediscovered my passion for Burger Rings, I reckon I’ve had a packet every day and I’m re-watching Game of Thrones,” Creasey told Hibernation.

“So a lot of people are going to come out of isolation having made progress. I think I’ve probably taken a step back.”

He has teamed up with GQ Australia magazine to host GQ Live! with Joel Creasey, a weekly series of fun Instagram live interviews with celebrities about life in isolation, what they have been up to and how they have been entertaining themselves.

First up in the series – which kicks off on Wednesday at 1pm on GQ’s own Instagram account (@gqaustralia) – is Australian singer Cody Simpson, live from Nashville, US.

How are TV control rooms coping with social distancing?

While some shows are continuing on a weekly or even daily basis, how does social distancing impact on TV control rooms? asks TV Tonight.

Most have pulled back on the number of staff in close proximity and instigated strict new measures designed to keep everybody safe.

Jon Olb, director of The Weekly and Mad as Hell says while one ABC Melbourne control room is larger than most it still requires precautions.

“The first thing that we do when we arrive is sterilise our respective areas. We keep our distance wherever possible,” he tells TV Tonight.

“Non-essential operators are moved to less populated areas of the control room, but all the self-monitoring must follow. Even bathroom breaks are twice as long to accommodate the necessary hygiene procedures.”

The Sunrise team is working with a smaller control room at their Martin Place studio but executive producer Michael Pell explains they too have adjusted numbers.

“Our control room is generally a tight squeeze, so we’ve removed two people from the front row and put them in other rooms, so they can still do their jobs, but with appropriate social distancing.

“A middle row of producers now has two, not three, with one upstairs or at home. It’s the same with our back row which is lighting, camera control unit and technical director. They’ve also been separated and appropriate measures put in place.”