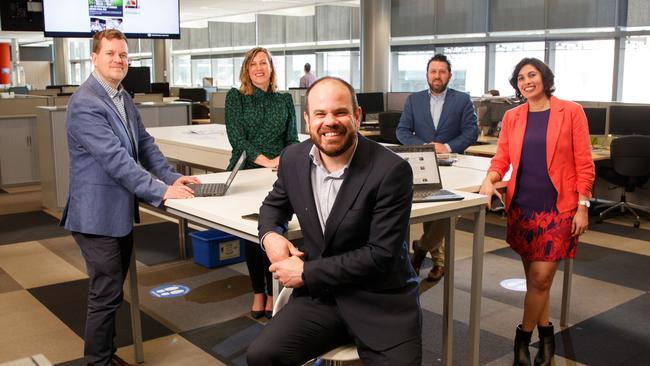 A jubilant Gudinski said the ride by first-time Melbourne Cup jockey Jye McNeil was destined for the history books.

In an interview for the Confidential at Oaks Day livestream, Gudinski revealed:

Nick Williams wanted a jockey “with no ego” to ride Twilight Payment.

Ed Sheeran FaceTimed him after the win, while pop star Shawn Mendes also texted his congratulations to Gudinski.

Kylie Minogue would have been banned from the owner’s box for wearing green on Cup Day.

“(Minogue) was wearing green (for her interview with Channel 10 on Cup Day),” Gudinski said.

“If she was in Melbourne, the Williams’ wouldn’t have let her in the box because they are very superstitious about green.”

The News Corp Australia digital product is the first to show off a redesign that will soon be rolled out to the metro dailies in other states around Australia.

In a note to readers, Savage continued:

This state’s premier news, sport, entertainment and information website has been rebuilt from the ground up to be faster, smarter, less congested and much more user-friendly.

For the past year, we have spent hundreds of hours with people all over Australia to find out what they want from their news websites and mobile sites. Our new suite of digital products – launching first in South Australia and then in New South Wales, Victoria and Queensland next month – gives our audience what they’ve asked for.

They asked for speed: we’ve delivered, by building one of the quickest-to-load news sites of any publisher, anywhere.

They asked to be able to find what they’re looking for more easily: we’ve delivered, by presenting a design that is clean and simple plus an intuitive navigation system that means users are only ever one click away from their area of interest.

They asked for more relevant content: we’ve delivered with more community news coverage across the state and personalised recommendations based on your reading habits. And in coming weeks, we’ll introduce topics that enable all content about that subject to be collected on one page.

News Corp Australia’s chief technology officer Julian Delany said the dramatic rise in consumer expectations around digital products in recent years has prompted a rethink in what News offers to its audiences.

“We’ve spoken to Advertiser, Sunday Mail and Messenger readers to listen to their views and hear directly what they want and expect from a digital news product,” he said.

“This extensive customer research has guided the new digital experiences we’ve unveiled this week. And this is just the beginning of The Advertiser’s digital evolution.”

The biggest political event of the year boosted Sky News broadcast audiences on Wednesday 4 November delivering top ratings on Foxtel, with coverage continuing on the channel as the final result of who becomes the President of the United States is yet to be decided.

Sky News recorded its highest rating day of the year with 5.6% audience share.

Sky News was the #1 channel on subscription television reaching more than 800,000 unique viewers.

Sky News has now delivered a share of 3.1% across the past 40 weeks, ranking as the #1 channel on Foxtel.

The New York Times Company has bet on digital readers as the future engine of its business since 2011, when it started charging for online content – and it has largely been a good gamble, reports the paper.

In the three-month period ending in September, for the first time, the revenue from digital subscribers was greater than the money the company brought in from print subscribers, The Times said Thursday as part of its third-quarter financial report.

“Our strategy of making journalism worth paying for continues to prove itself out,” Meredith Kopit Levien, who took over as chief executive in September, said in a statement. Digital subscriptions would not only be the central driver of the publisher’s growth, Levien added, but eventually become its biggest business.

Total revenue during the third quarter was flat, at US$426.9 million, and adjusted operating profit jumped 28 percent, to $56.5 million, beating investors’ expectations on both counts. Net income doubled to $33.6 million.

The company added 393,000 digital subscribers during the three months, bringing the total of paid online readers to more than six million. Of that group, about 4.7 million pay for the core news product, with the rest subscribing to the crossword and cooking apps. An additional 831,000 readers continued to pay for print subscriptions, a drop from last year, reflecting a steady decline in the broadsheet business.

Starting in December and throughout the summer holidays, each week a special guest will be part of the comedy sketch and prank show. Joining in the fun are bestselling children’s author’s Andy Griffiths and MasterChef Australia contestant, author, artist, and television presenter Poh Ling Yeow.

From the Oz Kids Network at-home audience in 67 countries around the world, children provide story entries and the special celebrity guests will select and narrate the one stand-out story that is an amusing tale.

A bumper Christmas special event will feature Australia’s global singing superstars Human Nature on December 25th at 4.30 pm (AEDT) with a song for the season performed in collaboration with music man, John Foreman.

Oz Kids Originals are exclusively made predominantly in Australia by Australian Production House in Melbourne for children all over the world. The Oz Kids Network is now being viewed in over 70 countries.

“What (the pandemic) has actually produced is something quite remarkable.”

Shtein is producer on ABC music series The Sound, which emerged during Australia’s first lockdown, and has returned with a second season.

Back for Ausmusic Month the series has dug deep to film its talent in safe, if challenging, circumstances.

But the result is an extraordinarily creative hour of performers hauntingly captured in bold locations, and collaborations that may never have been conceived were it not for the pandemic.

Shtein says Mushroom impresario Michael Gudinski had the vision for the show, with Tom McDonald as Creative Director.

“We’ve got our artists in empty halls and stadiums. It’s very poignant about the times we’re going through but it hasn’t detracted…. it’s pioneering a whole new field for performances.”

Fox Sports digital has recorded its highest ever digital traffic on Melbourne Cup day with almost 1.8 million sessions up 21% on 2019 and more than 2.5 million page views, up 15%.

According to the Nielsen DCR database, FoxSports.com.au dominated over all other digital sports news brands on Melbourne Cup day, having the highest sessions and views for the day.

Fox Sports was also ranked in the top 10 daily ratings sessions recorded in Nielsen to date out of all brands and entities.

Luke McIlveen, executive editor at Fox Sports, said: “These are great numbers and confirm our position as the number one destination for sports news in Australia. We are bringing something different to our sports coverage with great integration of video and a highly skilled and hard-working editorial team dedicated to the best coverage of the nation’s biggest sporting events.

“These results also reinforce our decision to concentrate of FoxSports.com.au which now accounts for more than 80% of all our digital traffic and move away from the use of apps.”

The mail is the Nine Network could become the new home of rugby, with an announcement expected in the next week, reports The Australian’s Jessica Halloran.

Rugby’s 25-year association with Foxtel, which sensationally took the sport into the professional era, investing around $1bn into the code, could be over. But can Nine rebuild the game in its greatest time of need?

Rugby in this country has never been in a lower position or more desperately in need of a radical overhaul. “Who’s going to watch a team that’s made losing an industry,” as one fan put it bluntly on The Australian’s website.

Will Nine be willing to put the best Super Rugby game each week – which would have to be a Waratahs or Reds game – in front of the paywall on Stan? Will the game be on Nine’s main channel rather than one of it’s secondary channels?