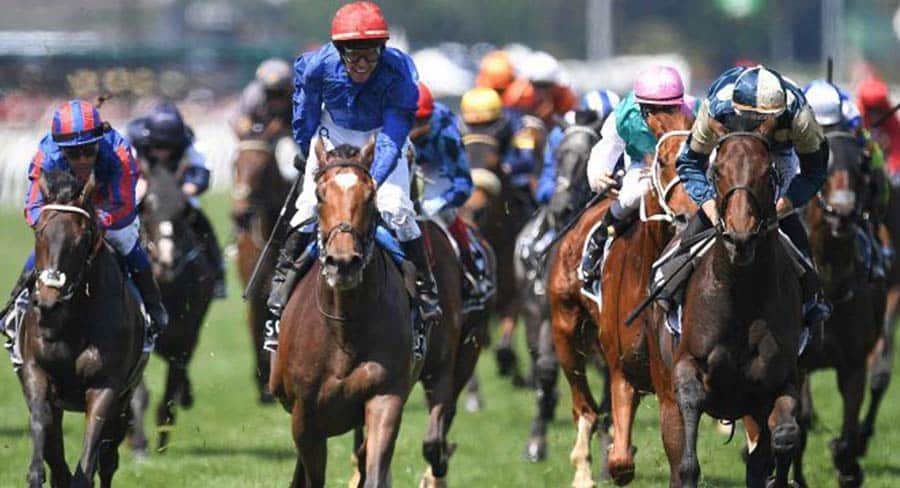 “We believe our deal is highly attractive to all shareholders with clear line of sight on cost synergies of at least $11m, predominantly through leveraging SWM’s resources and with potential revenue opportunities,” Warburton told The Australian.

“Our company brings capabilities and rights to the Prime Group that they have been unable to invest in or leverage in regional markets, which we believe could present a material revenue opportunity for the combined group,” he said.

“Seven is the leading news broadcast network across the country and news is a fundamental pillar in our content strategy and part of our DNA. Regional news will continue to be invested in, as we have done in regional Queensland, which has driven material ratings and revenue share in this market.”

Network 10 boss Paul Anderson has shrugged off the mini-celebrity protest against the Melbourne Cup, declaring the broadcaster is laser-focused on delivering super-charged coverage of the spring racing carnival, including the race that stops the nation, reports The Australian’s Lilly Vitorovich.

Anderson’s nonchalant view of three female celebrities pulling out of the Melbourne Cup follows a similar position by Victorian Premier Daniel Andrews, who last week said the Melbourne Cup is “not about so-called big celebs”, but ordinary Victorians enjoying a day out.

10 is broadcasting the Melbourne Cup Carnival for the first time in 18 years after snatching the rights from rival Seven West Media by striking a five-year, $100m deal with the Victorian Racing Club in September last year, almost 10 times more than long-term rights holder Seven.

A Department of Communications commissioned report has recommended the scrapping of media laws, which could allow for a wave of mergers and acquisitions in regional television, print and radio, in the interest of keeping local news in areas outside of capital cities, reports The AFR’s Max Mason.

The removal of these laws could, in theory, allow for the merger of regional TV broadcasters, such as WIN Corp and Southern Cross Austereo.

The Australian Financial Review reveals the report, which was written by retired PwC partner Megan Brownlow, agreed with regional media executives about the grim future of the industry without regulatory changes.

The recommendations are believed to include the removal of the one-to-a-market rule, which prevents a television broadcaster from operating more than one TV licence in a market, and the loosening of the voices test, which in regional areas requires four separate media companies. However, this would be with the caveat that this only applies to regional areas, not metro.

As Communications Minister Paul Fletcher prepares for key talks with regional media stakeholders in Wagga Wagga this week industry sources cautioned that supporting the sector remains complex and there is “no silver bullet” that the government could use to ensure rural newsrooms survive. “No one has solved this problem, not in the UK or the US,” one source said.

A media source familiar with the ongoing discussions said the main concern was that no country had yet figured out how to support regional media companies in the face of declining audiences and advertising revenue.

Foxtel has used cash borrowed from News Corp to help cover another multi-hundred-million-dollar debt repayment as the pay television business ramps up its push into streaming to fight off rivals Netflix and Stan and prepare for the imminent entry of Disney+, reports The AFR’s Max Mason.

In November last year, Foxtel launched its sports streaming service Kayo, making its large portfolio available for $25. Previously, to get access to Foxtel’s sport offering subscribers needed to pay about $50 or more.

On Friday, News Corp is expected to reveal Kayo has grown to about 400,000 paying subscribers. Kayo was launched as a means to tap a customer base that was not prepared to shell out $50 for sport, but would pay $25.

Nine Entertainment Co has kicked off a major integration effort with the newsrooms of recently acquired AM radio stations including 2GB in Sydney and 3AW in Melbourne as it continues to search for cost savings, reports The Sydney Morning Herald’s Jennifer Duke.

Each radio newsroom across the Macquarie radio network will now send one staff member to listen in to the local Nine News morning editorial call to discuss the upcoming day’s planned stories, an internal email seen by The Sydney Morning Herald and The Age shows.

The new system has been trialled in Sydney, with reporters on both sides expected to pitch in with extra audio and details where possible. Nine reporters are also filing voice reports from stories where Macquarie reporters are not available, the email advised.

At the same time as Facebook chief executive Mark Zuckerberg was giving his big speech at Georgetown University last week, trying to rework the debate about his company into one about free speech instead of publishing lies, there were protests everywhere, writes Alan Kohler in The Australian.

Hong Kong, Lebanon, Chile and “Extinction Rebellion” climate change protests all over the place. It’s reminiscent of the protests of 1968, except for one big difference: social media.

It’s so much quicker and easier to organise a protest now. The social networks are free and ubiquitous, which means you can communicate with other angry people instantly, everywhere, and get them to join you in the street.

In his speech, Mark Zuckerberg came up with the expression “the fifth estate”, as in: “People having the power to express themselves at scale is a new kind of force in the world — a fifth estate alongside the other power structures of society. People no longer have to rely on traditional gatekeepers in politics or media to make their voices heard, and that has important consequences.”

In many ways, Zuckerberg is simply repeating what every media mogul before him has done, which is to publish content that appeals to a large number of people and sell access to those people to advertisers.

Except there are three big differences with both Facebook and Google: they have zero marginal costs; they don’t check anything; and they know a lot about their customers.

They do good things as well, including helping to bring down bad governments, like the one in Lebanon. But the power of these global platforms that publish lies and sell our secrets to commerce is one the great governance challenges of our time.

Governments will have to get involved and regulate them, perhaps break them up, before they issue their own money and become governments themselves.

The Daily Telegraph’s appeal against actor Geoffrey Rush’s record defamation win will be heard by the Federal Court on Monday and Tuesday, with the court’s full bench now including a female judge, instead of the all-male line-up originally scheduled, reports The Australian’s Rosemary Neill.

Federal Court judges Michael Wheelahan and Richard White will also hear the appeal in Sydney. The court would not comment on the changed line-up.

In its appeal, The Daily Telegraph will argue Federal Court judge Michael Wigney’s conduct of the original case gave rise to “an apprehension of bias’’ and that his awarding of damages was excessive. Earlier this year, Rush was awarded damages of almost $2.9m – a record for an individual plaintiff — after Justice Wigney found the Telegraph had defamed the Oscar winner in a poster and front-page articles published in 2017.

Boost for US political junkies as Fetch brings MSNBC to Australia

The launch of a real-time feed of the channel coincides with a turbulent period in Washington as US president Donald Trump faces an impeachment enquiry and as the country gears up for the 2020 election campaign.

Netflix, Stan, Amazon Prime: Coming soon to a cinema near you

At precisely 6pm on Friday, David Michod‘s The King dropped into the Netflix library worldwide. But a small number of Australians had already seen the movie in cinemas up to two weeks earlier, as part of a growing trend for auteur-led movies to enjoy a short theatrical season before appearing on streaming platforms, reports The Age’s Karl Quinn.

On the surface of it, this appears to be a win-win for consumers. Those who want to see quality movies on the big screen can, while those who think the whole cinema experience is too expensive or inconvenient don’t have to wait the customary 90 days before they can watch it at home.

Stan has previously taken this path with The Second, a low-budget thriller starring Vince Colosimo, Susie Porter and Rachel Blake, but will soon take on a much bigger proposition with Justin Kurzel‘s hotly anticipated True History of the Kelly Gang, which will open in cinemas a couple of weeks before its debut on the service in January 2020.

The traditional model of releasing a film “requires it to work theatrically to drive the engine of the economic model,” says Emile Sherman, Oscar-winning producer of The King’s Speech. “If it does well at the box office, the ancillaries [DVD, Blu-Ray, TV etc] will follow, and that’s what the distributor is relying on to make a return. So all the pressure sits on theatrical.”

More than 50 retired racehorses will show off for their showjumping prowess for a reality TV series on the Mornington Peninsula on Monday, reports News Corp’s Ian Royall.

The 54 former gallopers will compete in the second series of Jump Off at Boneo Park Equestrian Centre.

The thoroughbreds and their riders will battle it out in three categories for horses of different racing and jumping backgrounds.

Among the competitors is three-time Olympics equestrian Vicki Roycroft who will ride Austin’s Cane, an 11-year-old gelding who raced 24 times.

Racing Victoria’s Off The Track program is a major sponsor of the series which has gone national this year.

Melbourne production company Showmakers will film the latest season of Jump Off which will be broadcast on Channel 7 on November 17.

Stan as acquired the family drama Yellowstone, starring two-time Oscar-winner Kevin Costner (pictured), which will make its Australian premiere this month – with Seasons 1 and 2 available to stream on Stan from Friday, 8 November.

Stan reports Yellowstone was the most-watched original cable TV series of the summer, with the second season debut drawing even more viewers than the first season premiere. 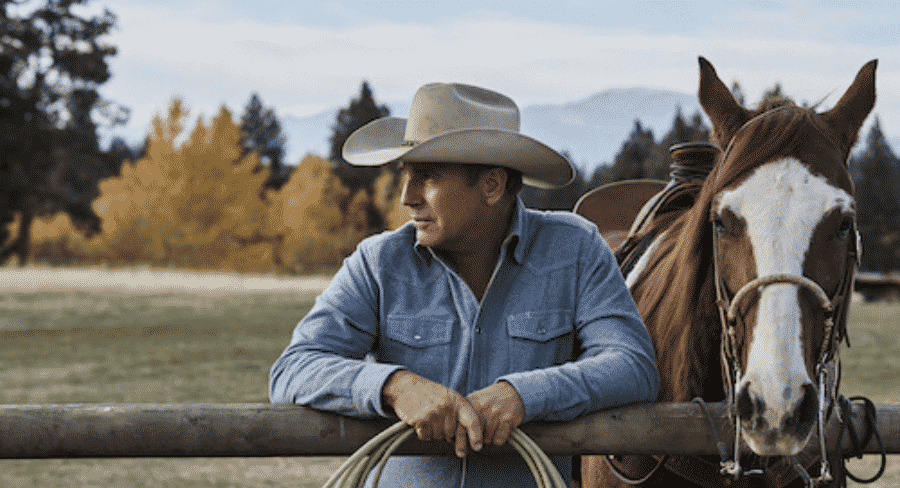 Yellowstone chronicles the Dutton family, led by John Dutton (Costner), who controls the largest contiguous cattle ranch in the United States. Amid shifting alliances, unsolved murders, open wounds, and hard-earned respect, the ranch is in constant conflict with those it borders – an expanding town, an Indian reservation, and America’s first national park.

Following the enormous success of the first two seasons, a third season has already been commissioned and is expected to premiere in Australia only on Stan next year – same day as the US.