The Daily Telegraph, Are Media, 2GB, The Crown, Nicole Kidman, and Tennis Australia

Alexi Baker: The truth about Hollywood Hugh, working at Nine and me

Alexi Baker says she’s happy to talk about the relationship with Hugh Marks – how it started, and why she, and then he, had to quit – because she can see a false narrative taking hold, reports The Australian’s Caroline Overington.

The actual story, she says, is this: she started at Nine when it was a pure TV company in 2011. Marks was already there but didn’t become CEO until 2015.

Together they worked on some monster deals – Nine has in the past five years merged with Fairfax; there’s been a deal with Macquarie Radio; cricket was dropped for tennis; NRL was nailed down, and so on – and while both were once married, they each in time became single.

She agrees that people were surprised: she’s in her 30s, and has no children; she lives in the trendy inner-city apartment, drives a sporty car, favours Louboutin heels; he’s in his 50s, divorced with four kids and called Hollywood Hugh in an ironic way because he’s a bit of a dork.

But, she says, “when there is some chemistry, I think you both feel it”. That said, it’s all still “pretty new”. How new? For example, has she met his kids?

“Not all of them,” she replies.

Anonymous email outed Nine CEO relationship before it made public

An anonymous email about outgoing Nine chief executive Hugh Marks being in a relationship with former senior executive Alexi Baker before the public revelations on Saturday morning has raised questions about whether somebody was trying to undermine the boss of Australia’s biggest media company, reports The AFR’s Max Mason.

The email, sent on Friday morning, detailed the relationship before it was made public on Saturday and asked questions about what information chairman Peter Costello knew and when.

Nine Entertainment investors are demanding answers about the circumstances surrounding the departure of chief executive Hugh Marks at the weekend, with concerns over when and who knew about the office relationship that ended his time at the top of the media giant, report The Australian’s Lilly Vitorovich and Cliona O’Dowd.

Martin Currie chief investment officer Reece Birtles said he would be seeking answers from the Nine board, in particular about their governance processes.

For Nine, timing is everything to keep Hugh Marks’ options open

Hugh Marks ‘retirement’ from Nine leaves open myriad questions which makes cultural change at the company impossible until a new boss is in the chair, reports The Australian’s John Durie.

The simple fact is Marks is leaving for a basic governance flaw of keeping his board informed about his relationship with a direct report.

The simple rule of thumb about any relationship between a chief executive and a direct report is that it must be declared to the chair and the board. Plainly, this obvious rule was broken.

That explains why the board is split and the management in turmoil.

News Corp Australia NSW news brand The Daily Telegraph has flipped the switch on its new-look website. The move comes after The Advertiser previewed the new company-wide re-design earlier this month.

NSW’s premier news, sport, entertainment and information website has been rebuilt from the ground up to be faster, smarter, less congested and much more user-friendly. 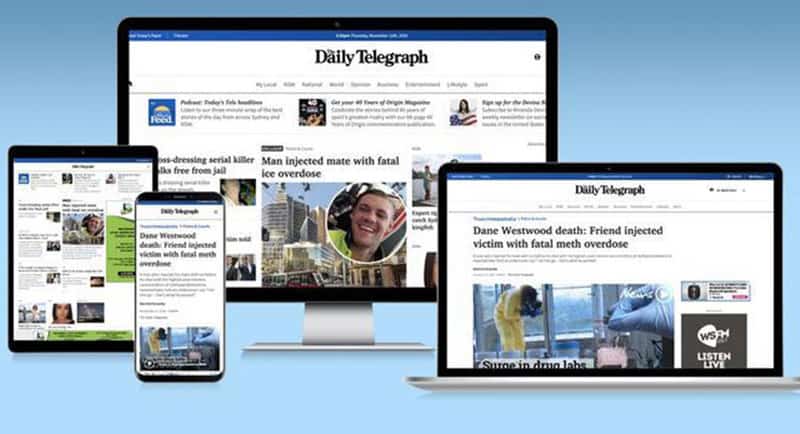 For the past year, we have spent hundreds of hours with people all over Australia to find out what they want from their news websites and mobile sites.

Our new suite of digital products gives our audience what they’ve asked for.

They asked for speed: we’ve delivered, by building one of the quickest-to-load news sites of any publisher, anywhere.

They asked to be able to find what they’re looking for more easily: we’ve delivered, by presenting a design that is clean and simple plus an intuitive navigation system that means users are only ever one click away from their area of interest.

They asked for more relevant content: we’ve delivered with more community news coverage across the state and personalised recommendations based on your reading habits. And in coming weeks, we’ll introduce topics that enable all content about that subject to be collected on one page. 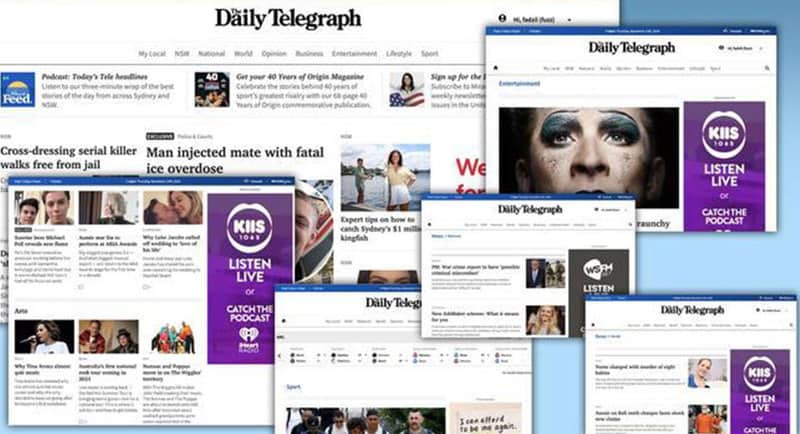 News Corp Australia’s chief technology officer Julian Delany said the dramatic rise in consumer expectations around digital products in recent years has prompted a rethink in what News offers to its audiences.

“We’ve spoken to Daily Telegraph, Sunday Telegraph and NewsLocal readers to listen to their views and hear directly what they want and expect from a digital news product,” he said.

Amber Giles has been appointed as editor of TV Week, who has been with the magazine for 10 years, reports TV Tonight.

Most recently deputy editor, she assumes the role vacated by Thomas Woodgate in May. The perennial magazine is published by Are Media (formerly Bauer Media).

In a statement to TV Tonight, she said, “I am thrilled to be appointed as editor of TV Week magazine. It’s an iconic brand that I’ve worked on for 10 years and I’ve grown a close affinity to our dedicated readers who love TV as much as we do.

“While the way we consume TV is rapidly changing, we need to ensure we can keep delivering the inside scoop for our readers as they’ve come to expect over the decades.”

TV Week is one of the most-read magazines in Australia with over 500,000 readers in the most recent emma readership data.

James Bracey, Peter Psaltis and Tim Gilbert have also been announced as fill-in hosts over summer, while regular host Mark Levy takes a short break before filling in for Ray Hadley on Mornings from mid-December.

“Wide World of Sports radio has been a popular addition to our 2GB line-up in 2020 and we’re thrilled that Mark, Todd and Candice are joining our line-up as we head into the summer of tennis and cricket,” said 2GB content manager, Luke Davis.

“The show gives Sydney listeners the unique opportunity to speak directly to some of the biggest names in sport and with the experience of Brace, Psalty and Tim at the helm, we’ve got a cracking summer of radio ahead.”

WWOS is broadcast on 2GB every Monday to Thursday 6pm-7pm.

The Block 2020: Harry and Tash’s Brighton house most viewed online

The Block auctions are less than a week away, with the five houses at New Street, Brighton attracting hundreds of thousands of online listing views – but which one has had the most? asks Domain’s Jemimah Clegg.

With an impressive 194,129 views so far, Harry and Tash’s House 1 has proven most popular with online listing viewers since going live in late September, recent data shows.

The Prince of Wales has refused to watch The Crown, royal sources disclosed, as friends said it was “terrible” that his name was being “dragged through the mud”, reports the London Telegraph.

The new series of the Netflix drama includes the arrival of the young Diana Spencer and rakes over her fledgling relationship with the Prince, whom it makes clear is still in love with Camilla Parker Bowles.

As their marriage becomes increasingly toxic, the Prince is portrayed in a harsh light, withholding the love and affection Diana desperately needed, jealous of her popularity and ultimately treating her with contempt.

Friends of the Prince yesterday accused Netflix of “trolling on a Hollywood budget”, exploiting the Royal family’s pain for financial gain and presenting “fiction as fact”.

One told the Mail on Sunday: “This is drama and entertainment for commercial ends being made with no regard to the actual people involved who are having their lives hijacked and exploited. It’s dragging up things that happened during very difficult times 25 or 30 years ago without a thought for anyone’s feelings. That isn’t right or fair, particularly when so many of the things depicted don’t represent the truth.”

A source who could not be identified because they work with the royal family said that the Prince did not watch The Crown, and was unlikely to even be aware that a new series had been released. “He has absolutely no view of The Crown,” they said. “He would rather distance himself from the whole thing.” A palace insider was quoted as saying: “There is no sense of telling carefully nuanced stories. It’s all very two-dimensional.”

Nicole Kidman has stopped by the Darlinghurst apartment building where an 18-storey portrait of the A-list actor is painted, report News Corp’s Kaitlyn Hudson-O’Farrell and Jonathon Moran.

Covering her mouth with a surprised look, Kidman shared the happy snap to her millions of followers on social media. 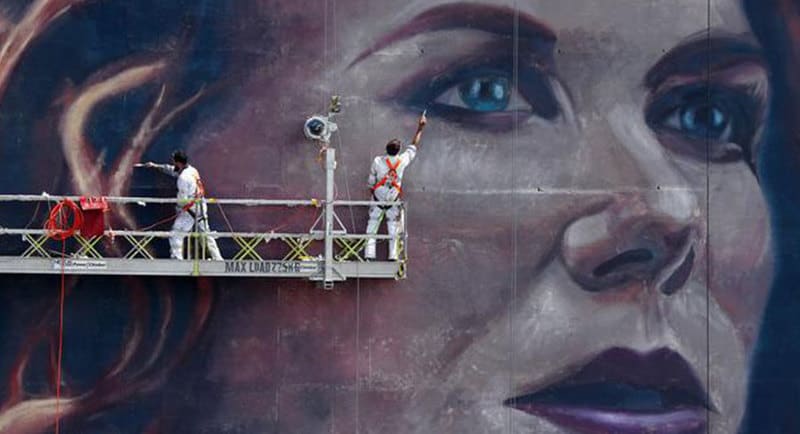 “WOW!” she wrote on Instagram. “Thank you Sydney for celebrating #TheUndoing.”

Streaming service Binge commissioned the larger-than-life piece of Kidman, 53, as her character in miniseries The Undoing to celebrate the program’s success.

Tennis Australia have put forward a historic proposal to extend the summer beyond January’s Australian Open to keep players in the country until mid-February, report Nine Publishing’s Michael Chammas and Sam McClure.

It comes as Sydney looks set to go without any tennis action this summer, with government restrictions likely to force all interstate lead-up events to Melbourne. TA on Monday revealed a $33 million biosecurity investment to keep the Australian Open alive.

However, chief executive Craig Tiley has hatched a plan to capitalise on the number of players set to arrive in the country from mid-December, putting forward a proposal to stage more events after the Australian Open wraps up on January 31.

“We’re planning a five-, potentially six-week summer. I think that’ll be great for our sport here in Australia, great for our position globally, and particularly if this is broadcast around the world. It’s a great opportunity.”