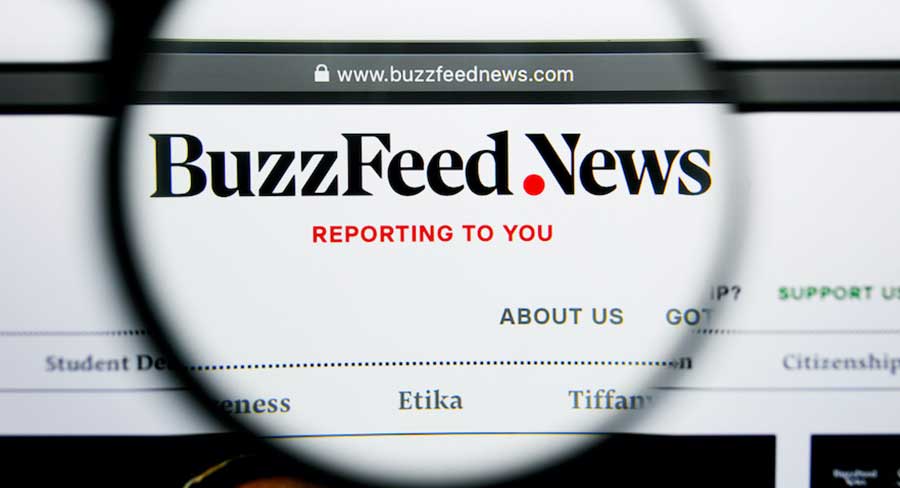 BuzzFeed is to end its news operations in the UK and Australia, effectively marking the end of the digital upstart’s global ambition to shake up traditional news media, reports The Guardian.

Once derided for its focus on traffic-grabbing “listicles”, BuzzFeed transformed into a highly respected peer to traditional media outlets. On Wednesday it said it was giving up on local news and politics coverage in favour of news that “hits big” in the United States.

The company, which had been struggling before the coronavirus pandemic further hammered its lifeblood of advertising revenue, has furloughed its 10 UK news staff and four in Australia as part of the strategic cutback. BuzzFeed launched a local news operation in the UK just over six years ago.

According to sources, those furloughed are “highly unlikely” to return to BuzzFeed. BuzzFeed UK will keep staff covering news with a “global audience”, such as its investigations operation and celebrity news coverage, for now at least.

“For economic and strategic reasons, we are going to focus on news that hits big in the United States during this difficult period,” the company said.

“Therefore, we will notify staff in the UK and Australia that we are not planning to cover local news in those countries. We will be consulting with employees on our plans regarding furloughs and stand-downs in these regions.”

Cash-strapped Seven West Media has sold the Perth headquarters of its newspapers, The West Australian and The Sunday Times, for $75m, less than two weeks after banking $40m from the sale of its Pacific Magazines business, reports The Australian’s Lilly Vitorovich.

In a brief statement, Seven said it has sold its Osborne Park facility for $75m to a special purpose trust called Primewest Media Trust, which is managed by Primewest Management.

Seven West’s newspapers and television station TVW7 will continue to occupy the site, striking a 15-year lease as part of the sale deal.

The property sale is expected to be completed in about four weeks, according to Seven’s statement, which was authorised by chief executive James Warburton.

Nine chairman and former federal treasurer Peter Costello says a mandatory code of conduct on Facebook and Google should force the technology giants to pay about $600 million a year into a fund distributed between Australian media companies, report The AFR’s Max Mason and John Kehoe.

Costello said Nine, owner of The Australian Financial Review, would submit to the competition regulator, which is drawing up the code, that Google and Facebook pay around 10 per cent of the revenue they earn from Australia, effectively for the licensing of content from local media.

“We think that Google and Facebook are driving advertising revenue of about $6 billion in Australia, and roughly 10 per cent of that is as a result of news content,” Costello said.

Costello praised the performance of Nine chief executive Hugh Marks and the company’s strategy after a report in News Corp’s The Daily Telegraph alleged there were boardroom concerns and that some directors were openly pushing for his removal.

“The media is being structurally challenged, particularly by big international technology companies. The response of Nine … has been amongst the best, if not the best, in Australia,” he said.

“We’re now driving 45 per cent of our EBITDA (earnings before interest, tax, depreciation and amortisation) from our digital properties … which is a very high percentage.

“On our linear television network, we are No. 1 in ratings and No. 1 in revenue. We are in the midst of this huge economic shock which is affecting all businesses, but we are weathering it as well, if not better, than any other media company.”

Jones’ $4 million annual salary included entitlements based directly on his share of the radio market as well as the amount of money he generated from advertisers. The figure has fallen substantially over the past year as brands distanced themselves from Jones’ controversial commentary.

But sources familiar with the arrangements said he would be paid out of his contract as long as he adheres to a non-compete clause preventing him from expanding his media commitments.

One television executive, who spoke on the condition of anonymity, said News Corp has been wanting to increase Jones’ presence on Sky News for some time.

The TV executive said giving Jones a permanent role at 8pm once his non-compete clause is up would finally deliver the broadcaster a “solid Monday to Friday”. The executive added that Jones is lucrative to Sky because its broadcaster, Foxtel, has a subscriber base that – like 2GB – skews older.

“There are currently no changes being made to the Sky News programming schedule,” a Sky News spokeswoman said.

The head of Australia’s peak body for travel agents has resigned after revelations he told travel agents that A Current Affair host Tracy Grimshaw “needs to be given a firm uppercut or a slap across the face” over the program’s reporting of a travel industry refund scandal, report David Estcourt, Paul Sakkal and Samantha Hutchinson.

Outgoing Australian Federation of Travel Agents chief executive Jayson Westbury said in a statement released Wednesday that his comments should not have been taken literally but were unacceptable, and he would be leaving his post effective immediately.

“His choice of words cannot be condoned,” Tom Manwaring, AFTA chairman, said in a statement.

“His work history stands in good stead for the service he has provided the travel industry and AFTA’s members.”

Westbury recorded an interview on Wednesday morning that was set to be broadcast on A Current Affair on Wednesday night, in which he apologised for his comments.

Senior Nine Entertainment executives are internally conceding they will lose their commanding lead in the nation’s biggest radio market when Alan Jones steps down at the end of the month, but are gambling that the loss of listeners will be offset by a long-term rise in advertising revenue, reports The Australian’s Steve Jackson and Lilly Vitorovich.

The calculated risk comes as part of a broader strategic shift across Nine placing a greater emphasis on commercial sustainability rather than ratings dominance.

Jones stunned listeners on Tuesday when he announced he was retiring from his program after 35 years in radio while barely six months into an $8m, two-year contract.

The team behind Jones’s eponymous breakfast show will learn its fate on Thursday after being summoned for individual meetings with 2GB management.

There are fears many of Jones’s loyal staffers, some of whom have been with him for almost three decades, could be forced to follow him out the door when he switches off his microphone on May 29, leaving incoming breakfast host Ben Fordham with a dearth of experienced operators.

Alan Jones’s departure from Sydney radio station 2GB after 35 years will lead to a drop in advertising revenue for owner Nine Entertainment, although ad bosses anticipate that his successor, Ben Fordham, will attract new brands and younger listeners, report The Australian’s Lilly Vitorovich and Leo Shanahan.

Ad veteran John Steedman forecasts a drop in ad revenue following the changing of the guard. “Obviously, there will be some drop-off in revenue, more so from his direct client supporters. However, I am sure Ben Fordham will do a good job in holding on to a fair share of Jones’s listeners. In fact, the audience may trend somewhat younger,” he said.

PHD managing director Lucy Formosa Morgan also expects some of Jones’s loyal listeners to turn off when he leaves. “I’d assume audiences will decline off the back of his departure but there’s really very little competition out there for loyal talkback radio listeners to go elsewhere or for advertisers to target older audiences on radio.”

In almost every way, Lisa Wilkinson’s childhood was the polar opposite of her mother’s, reports The Age’s Michael Lallo previewing a new episode of Who Do You Think You Are? which starts next week.

While The Project co-host was raised in a tight-knit family, the late Beryl Wilkinson endured a miserable home life. Her peers taunted her for being the ‘bastard’ daughter of a man whose name she didn’t know. Her mother drank too much and became addicted to Bex, a now-banned analgesic powder. Often, Beryl wasn’t sure where she’d be sleeping at night.

“She was thrown into orphanages at the drop of a hat,” Wilkinson says. “When you’re as deprived of love as my mother was, it’s difficult to unlearn a lot of that upheaval and unrest.”

Beryl died in 2018. The following year, Wilkinson signed up to the SBS genealogy series Who Do You Think You Are?, which took her from Sydney to Brisbane to India. What she discovered only strengthened her admiration for her mother.

From the battle of Waterloo to Belgravia with Julian Fellowes

If the old adage “start as you mean to go on” is anything to go by, the opening scenes of Julian Fellowes‘ new drama Belgravia, set at one of history’s grandest parties, the Duchess of Richmond’s ball in Brussels in 1815, make a dazzling promise for the six one-hour episodes to follow, reports The Sydney Morning Herald’s Michael Idato.

The ball, hosted by Charlotte, Duchess of Richmond, was held the night before the Battle of Quatre Bras. Her husband, the Duke, commanded the reserve force in Brussels, which was then part of the United Kingdom, to defend the city in the event of invasion by the armies of Napoleon.

For the new series, based on the book of the same name Fellowes wrote in 2016, the ball serves as a poignant moment on the eve of tragedy. Days later, at the victorious Battle of Waterloo, many of the young men who attended the ball would lose their lives.

And yet Belgravia is neither a story of war, nor of the men who fought it, Fellowes says. Which is why the 70-year-old creator of Downton Abbey chose the ball, and not the more famous battles that followed it, as the place to begin the story.

“The main relationship of the piece in fact concerns two women, different in many ways but united by their shared loss of a child,” Fellowes says. “Given that the female characters define the story, it would seem to me quite wrong to begin the tale on the battlefield, where our principals, by definition, could make no appearance.”

Negotiations between the league and its broadcast partners over a reduced arrangement for the 2020 season are continuing.

But industry figures say five fewer rounds and shortened games will slice a minimum of 25 per cent off this year’s contracts.

The league pockets an average of $417 million a year in TV rights as part of its bumper six-year, $2.5 billion deal with Channel 7, Foxtel and Telstra that expires at the end of 2022.

A more savage 50 per cent reduction in broadcast fees this year would equate to lost revenues of $208.5 million.

The revised deal for 2020 is expected to fall within the 50-75 per cent range of the original agreement.

AFL Media, the league’s in-house digital business, could also be significantly diminished and refocused on supporting club websites as a result of the negotiations.