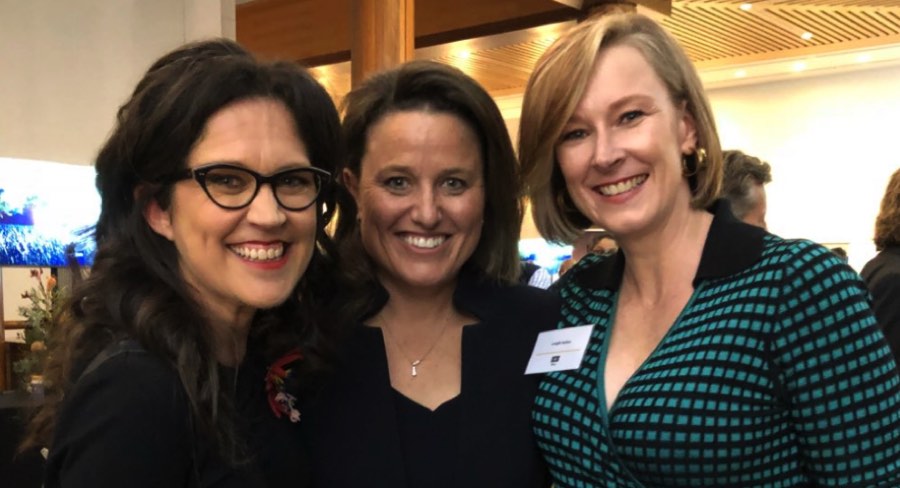 Mediaweek readers voting in this category were able to pick a journalist from any medium – online, print, television or radio. If Mediaweek readers voted ABC News as the Best News Brand, it makes sense that one of its highest-profile journalists receives this award.

People who value the ABC News offering also value the contribution from Leigh Sales and have voted accordingly.

Sales has a day job on the ABC primary channel and a number of other roles that helped to move our readers to choose her as the best.

That day job is the host of the daily current affairs show 7.30. After the 7pm edition of ABC News each day, 7.30 is usually the next most-watched program on the channel each weekday. Although the show is a collaborative effort from a big team, much of the attraction for audiences are the feature interviews that host Sales conducts.

A dual Walkley Award winner, Sales has interviewed dozens of world leaders and celebrities, from Australian prime ministers, Hillary Clinton, the Dalai Lama to Patti Smith, Harrison Ford and Julie Andrews. One of her most memorable in the past 12 months was with Paul McCartney.

Audiences wanting more of the Leigh Sales magic last year were able to download her podcasts with friend and colleague Annabel Crabb – Chat 10 Looks 3. Towards the end of 2018 they recorded a live podcast in front of fans in Melbourne. One host’s description of the podcast is:

A peripatetic podcast in which Leigh Sales and Annabel Crabb discuss what they’re reading, watching, cooking, listening to or irrationally exhilarated by.

One of them likes show tunes and is a monster who chucks books once she’s read them. The other one wrote this.

Sales also delivered a book to her publisher earlier in the year, which surfaced in October from Penguin Books:

Any Ordinary Day: Blindsides, Resilience and What Happens After the Worst Day of Your Life.

Penguin Books said Sales talks intimately with people who’ve faced the unimaginable, from terrorism to natural disaster to simply being in the wrong place at the wrong time. Expecting broken lives, she instead found strength, hope, even humour:

“Leigh brilliantly condenses the cutting-edge research on the way the human brain processes fear and grief, and poses the questions we too often ignore out of awkwardness. Along the way, she offers an unguarded account of her own challenges and what she’s learned about coping with life’s unexpected blows.

“Warm, candid and empathetic, this book is about what happens when ordinary people, on ordinary days, are forced to suddenly find the resilience most of us don’t know we have.”

Many viewers are disappointed that with Malcolm Turnbull no longer PM there are no more of the Sales v Turnbull clashes that made 7.30 such a must-watch. However Sales still confronts his successors and asks the hard questions.

There might be no more Malcolm, but there will be a federal election this year where the entertainment on election night on the ABC will include Sales and the channel’s election specialist Antony Green. The Sky News political editor is arguably the channel’s single most important asset. He and his Canberra colleagues have set the political agenda for many years and with Sky News turned on during the day viewers know they are not missing out on anything that happens in the nation’s capital.

He too published a book late in 2018 – Melbourne University Press published On Mutiny last October. “How did Scott Morrison emerge as Prime Minister? Why was Malcolm Bligh Turnbull removed?” Or as Lisa Wilkinson said in a blurb on the cover: “If you’re wondering WTF just happened in Australian politics.”

Mediaweek has been lucky enough to talk to Speers a number of times for written interviews and podcasts.

During 2018 we paired him with Sky News colleague Paul Murray where the two explained their different roles at the channel and misconceptions about how Sky News operates. Speers responded to comments Nine’s Chris Uhlmann made about Sky News:

“Chris Uhlmann is a mate and I respect him as a journalist. I have spoken to him about what he said and his views. I don’t disagree that Malcolm Turnbull did cop some pretty aggressive criticism. I think every prime minister who leaves office has made the same complaint though about copping some grief from a section of the media. Maybe it was a bit tougher on Turnbull in particular. What I don’t see evidence of is what Chris is suggesting in terms of what went on behind the scenes. Bullying, threats or intimidation to MPs – I know those people but I am not aware of any of that sort of behaviour.”

The good news is that Speers remains as Sky News’ Canberra ace under the channels new CEO in an election year – good times ahead. Kate McClymont takes to the podium

If Grey Hywood was the steadying hand on the executive level during years of turmoil at Fairfax Media, in the Sydney newsroom at least that role seems to have been filled at times by multi award-winning reporter Kate McClymont.

A prolific user of social media, McClymont’s tweets about her stories and what was happening at The SMH kept readers abreast and alert to the latest developments.

Just this week readers were reminded why they are so used to having her in the paper and online:

“I came back to the Herald in January 1990 after a two-year stint as a researcher at Four Corners #gulp. All up I have worked at the Herald for 32 years. Have loved every single minute (well almost).”

Her bylines have appeared on many of the big stories over those years.

In particular people alleged to have behaved badly from politicians to underworld figures to investigations into entertainers like Don Burke and Craig McLachlan.

McClymont has won seven Walkley Awards including a Gold Walkley in 2002.