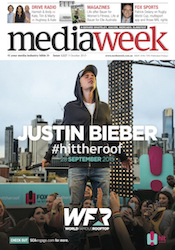 Inside the October 5 issue of Mediaweek magazine #1227

Inside Radio
GfK Radio Ratings Survey 6, 2015: Our expert analysis of the results of the latest radio ratings survey for five capital cities. All the ratings data from this survey – complete dayparts, demos and the change in each survey-on-survey – can be found at https://www.mediaweek.com.au/gfk-radio-ratings-62015-winners-and-losers/

Inside Television
Fast-tracking TV series – who are the winners and losers? Andrew Mercado discusses the new and returning shows for September