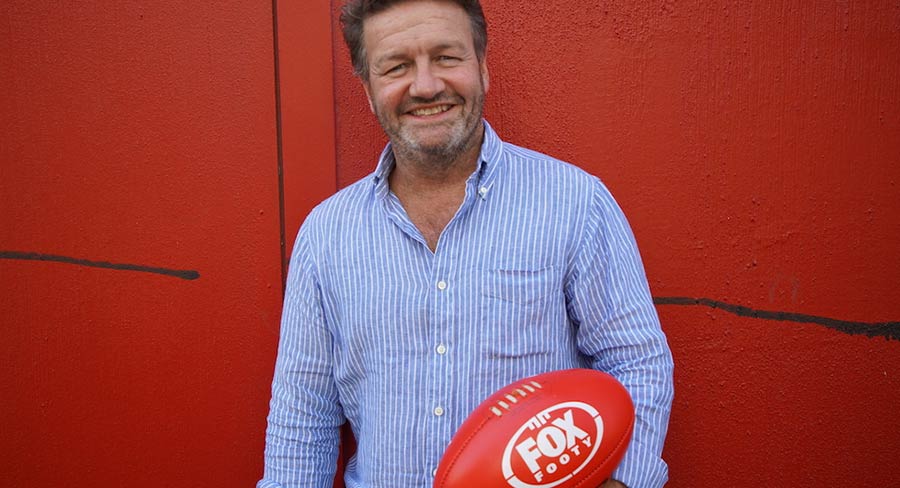 • Sacked by Seven many times, he’s loving life at the sports channel

You haven’t been watching much TV if you haven’t seen Lawrence Mooney work his magic in the past few years.

“I don’t think it’s that high,” the comedian better known as The Moonman told Mediaweek in a break during a busy week – or pre-round seven in AFL speak.

However with some help from IMDB, we calculate Mooney has made it on to over 60 different shows both as himself and as an actor in a number of dramas and comedies.

The latest is the Friday night live late show Up The Guts hosted by Mooney on Fox Footy.

“I know I have been sacked by Channel Seven over a dozen times,” Mooney told Mediaweek. “They never say sacked. They always say things like ‘Putting the show on hiatus’, ‘We are resting it’, or maybe even ‘You are still part of the Channel Seven family and always will be. But for the time being we are not continuing you on the show.’

“I have been delivered some delicious euphemisms over the years for ‘F – Off…you are no longer required’.”

Of his current TV residence, Fox Footy, Mooney s clearly enjoying it. “It’s a place that is quite interesting to work. I have never been into a TV network where there is a constant bubbliness and happiness amongst the work force because they have purpose, and purpose gives you meaning.

“When your role is clearly defined it is easy to have purpose.

“Everyone in Fox Footy knows their job is to put footy on the television, to talk about footy and to service footy. It is therefore a very happy and coherent place.

“Because I love footy and I love TV, Fox Footy is a very natural home for me.”

Mooney said there was only a little bit more pressure in hosting your own show than guesting on someone else’s. “That is outweighed by the huge amounts of joy that you have your own gig. It’s always good to know you are in control of your own destiny.”

With a wry grin he added: “I have never been the guest on a show and not looked at the host and thought, ‘I’m better than you’. Never! [Laughs]

“You have to have blind belief in this business otherwise you are not going to put a foot forward. You have to believe you are worthy of your own show.

“Having done live television before on Dirty Laundry Live, a show that I am still immensely proud of after three seasons on the ABC. Up The Guts isn’t a dissimilar experience: It’s a night show with an edge, and it’s all about having a laugh, popping a few balloons and popping a bit of pomposity. It is about irreverence, the classic Australian style of humour.” 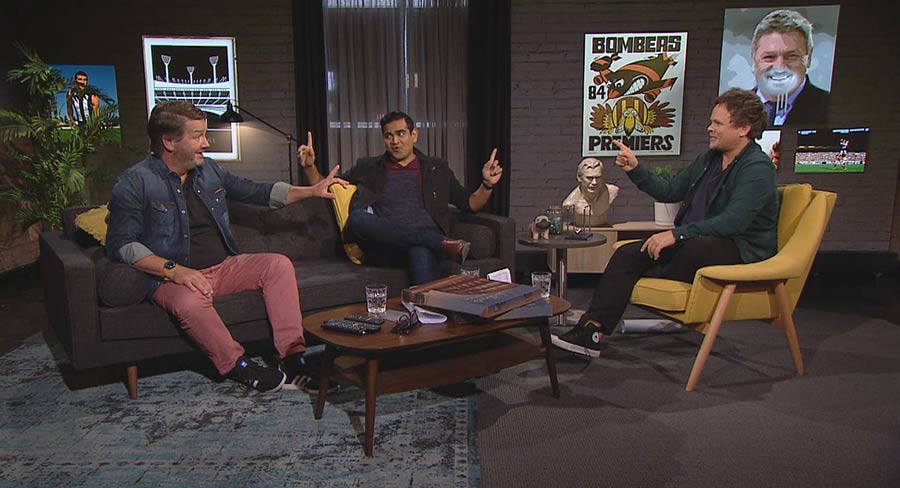 Lawrence Mooney with recent guest on Up The Guts, Dilruk Jayasinha, and regular contributor Deano

Up The Guts has the advantage of being on air after for what most weeks this year will be the first AFL game of the round on a Friday. (There are nine weeks with Thursday games this year.)

Mooney and his regular contributor Deano realise this gets them an early start on all the other footy shows crammed into network schedules. “There is a few of them,” noted Mooney.

“We have a fresh perspective. We are more in the genre of The Front Bar which is about footy and laughter.”

“I don’t like cruelty or bullying…but you also have to have an edge!”

That’s a good genre to be in at present given the success of the Mick Molloy, Sam Pang and Andy Maher combination on Seven.

A segment that went down well with the audience has been Open Mike, with Mooney giving his own special salute to the former chief football writer of the Herald Sun and Fox Footy host, Mike Sheahan.

“He is a fascinating font of information and a great ambassador for the electronic side of the game. He is right behind having a bit of fun poked at him too. He is in no way precious and he has given us his blessing to do it. It’s nice to have someone say ‘Just go for it’ when you are parodying someone. That’s not always the case.” 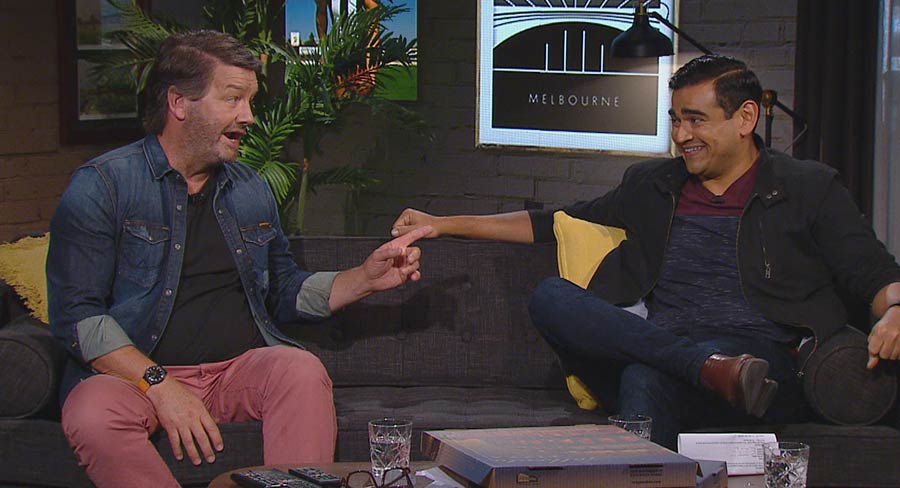 Watching the various Fox Footy commentators working with Mooney live when he crosses to the rooms after the Friday night game is always fun. “I do come with a reputation of anything could happen. But I have always liked the adage; comedy should have a sheep’s tooth, not a dog’s tooth. I don’t like cruelty or bullying…but you also have to have an edge!

“I’m always willing to take a clip or a drive by. There can be a square up too, which comes down the road.”

Mooney is still a young man, but we had to ask how he is coping with Friday breakfast radio and Friday late night TV?

“The body is willing, but it is the psyche that sometimes struggles. You have to make sure you are well slept. When you are fatigued you start looking for a boost and you have to stay away from chips, lollies and all those evil things.

“Because I am working late Friday night, the drinking can’t start until we are off air. But then it starts in earnest.”

Up The Guts is the first time that Mooney has worked with Deano, Dean Thomas, who is also the anchor of Nova 100’s Chrissie, Sam and Browny Melbourne breakfast show.

“I love the idea that I am probably in a position in my career where I am giving back…nurturing talent. I had an immediate affinity with Deano and I did check his credentials with my very close friend Sam Pang and he said he was gold.”

Mooney said he watched Deano’s Footy Show online prior to meeting him. “I thought this kid has really got something. I reckon Deano will be around for a long time.”

Team behind Up The Guts

“We operate on the smell of an oily rag which we kind of like. Jake Avent is our producer who has done much good work on TV. He is also producing The Beep Test, the show hosted by Dave Thornton, and also features Lehmo and myself.

“We have two great writers who have been on TV for a long time and worked with me on Dirty Laundry Live – Jason Marion and Declan Fay. It is a tight little team and they get the job done.”

The team have a phone production meeting on the day prior then they get to meet the host in person late Friday afternoon when they work on the script and polish a few gags.

The five-person team sit around with “pizza, burgers, or maybe even sushi” and watch the Friday night AFL match. “We pick a few things from it we might be able to use on the show that night.”

Tomorrow: Learning to say “no”. Plus why Mike Fitzpatrick and Grant Blackley gave Moonman the keys to Triple M Sydney.