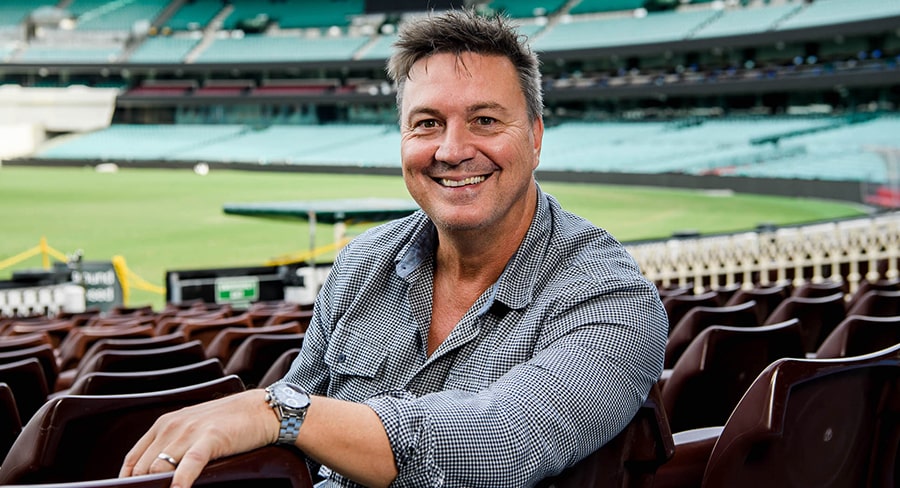 On his co-anchoring role on Fox Sports’ The Back Page, Tony Squires still exudes a youthful vigour and cheeky demeanour that makes it hard to think of him as a media veteran.

But his does qualify for that tag after a long career that started at The Newcastle Herald. The Novocastrian then graduated to The Sydney Morning Herald before leaping into broadcasting.

A carefully planned media career? – not exactly. “My early broadcasting ambitions were to just finish a sentence. [Laughs] I had a lot of mates in broadcasting – from John Doyle (aka Rampaging Roy Slaven) who put me on air. I didn’t push any doors down, I’d hover around doors until they opened and then sneak through.”

Broadcasters working alongside Squires at The SMH who also went into broadcasting included Richard Glover and Philip Clark. “I started my cadetship with Mark Riley who is now Seven’s political reporter. Newcastle has always been a good breeding ground, not just for journalism, but also the entertainment industry.”

Squires first foray into broadcasting was a show about television on Foxtel’s Arena channel. “I’d sit on a couch and talk about television which was my dream job.” The program was called Inside the Arena.

When Andrew Denton was hired to host breakfast at Triple M Sydney, Squires joined Denton’s team as a writer. He was also a judge on the ABC TV show Race Around the World.

“Damian Davis and I then came up with idea for a show The Fat.” Squires’ former TV colleague is now with CJZ as head of comedy and entertainment. The Fat was a huge ABC hit, so much so that Seven poached the team, changing the name of the format to 110% Tony Squires. “That remains one of the worst TV series names in the history of the world,” said the host. “We wanted to call it just 110%, but Seven insisted on adding my name because they wanted it to be part tonight show. But quite frankly I only have about 75% to give.” 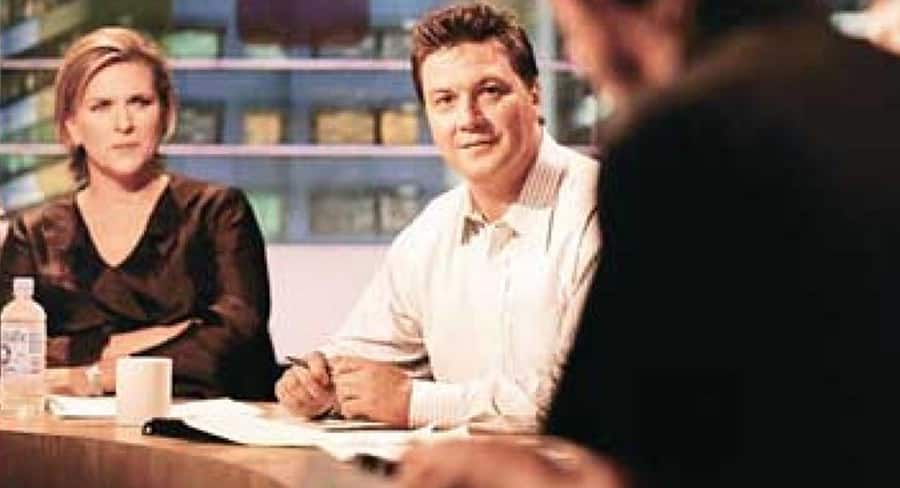 Photo: Tony Squires and Rebecca Wilson on The Fat

The audience gave it an even lower mark and it lasted 12 months at Seven. “The show had moved from being a half-hour show on Monday after a weekend of sport, to an hour show earlier on a Monday. Trying to get even more out of the format, which happens often in the media, it was changed to a variety show on a Friday night. It was still fun to do, but so different from the idea when it first began.”

The core team on The Fat was Squires with Rebecca Wilson and Peter Wilkins. Other regulars included John Rothfield (Dr Turf) and Sam Kekovich. “Sam delivered a hideous right wing rant and he’d say at the end of it, ‘It’s like you are reading my mind’.” Other regulars included Dave Hughes, Merrick and Rosso and a cricketer now more famous for his broadcasting insights and antics, Kerry O’Keefe.

Squires then became a Seven personality for a time. “I was on a journey and I would go with whatever was happening,” he explained.

One of Squires’ biggest ratings hits at Seven was hosting a program delving into the Seven vault and playing highlights. It’s surely got Sunday night written all over it if Seven went there again. “The history of TV has always been fascinating to me and it resonated with the audience too.”

Squires got to continue his long on-air partnership with the late Rebecca Wilson when the two were hired by then DMG Radio to host on Vega, one of the formats tried out in Sydney and Melbourne before new owners settled on smoothfm.

“We started with the drive show at Vega and were then moved to breakfast with Angela Catterns. After Ang left it was Rebecca and me with Mikey Robbins – that was a great show and great fun to do.

“The loss of Rebecca is incredibly sad because she and I worked together from the moment we started The Fat. ‘She speaks before thinks’ is the name I gave her and she would really speak her mind. I am much more conservative and want to be loved. She just didn’t care and it was a great combination.

“Working with Kelli Underwood on The Back Page is amazing. It is so important to have a female presence in a sporting environment and Kelli is a strong woman who can give as good as she gets.”

The Back Page is an iconic brand and has been going in Australia for close to quarter of a century. The show was launched with Mike Gibson hosting. “Gibbo might have wanted to go for a year or two more.” Squires is now into his 10th year co-hosting the program.

“The fact that The Back Page does all sports is both a blessing and a challenge. The audiences in New South Wales and Victoria are so different.”

Squires has a long relationship with Robert “Crash: Craddock who used to contribute to his radio program. “Crash, who is 123 years old, is on all the time. He just loves doing The Back Page and he doesn’t mind having the piss taken out of him. You can turn to him on any subject and he will have something to contribute.”

Another regular is Nova’s Ryan Fitzgerald. “While most people know him as a comedian, he has played sport at the highest level so he brings that insight.”

Lawrence Mooney is also a regular. “He can be a huge loose cannon,” laughed Squires. “We also have Braith Anasta.”

For Triple M, Squires hosts the weekend pre-game coverage The Saturday Scrum from 12pm until 3pm. The show alternates between Triple M studio and other weeks at an NRL ground. Saturday regulars include Ryan Girdler and Emma Lawrence and a rotating chair for current and former players.

The show’s not always strictly NRL. “My favourite thing is when we get off-topic. What the run sheet and what actually happens are two very different things. Radio is wonderful because we have freedom to talk and it can go on a path where you weren’t expecting it to go. Television offers that opportunity too, but it also operates within tight constructions.”

Squires would like to do more writing into the future. “When I get a bit older I image myself sitting down with a whisky and a typewriter, asking myself why wasn’t I Hemingway. Either that or letters to the editor!”