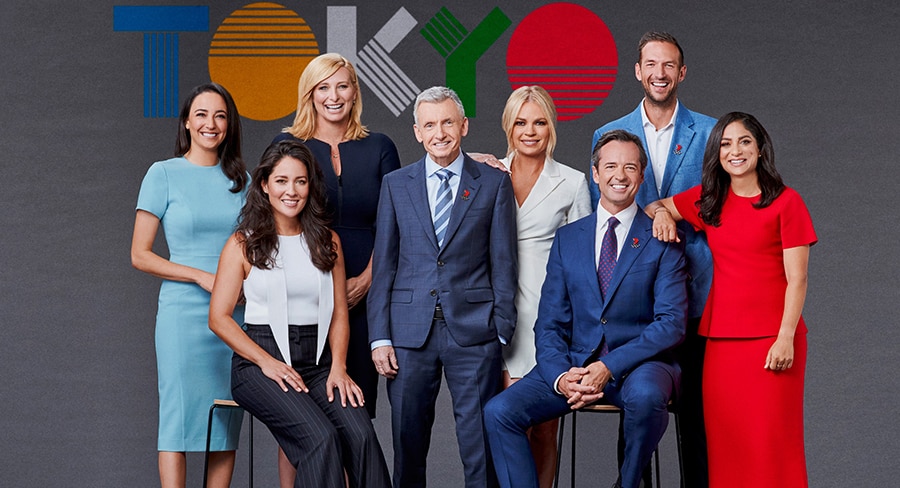 Bruce McAvaney will return for his 11th Olympic Games coverage, with Olympic broadcast rights holder Seven’s commentary team featuring 14 of Australian Olympians with a total of 14 Olympic gold medals between them and hundreds of Olympic Games of experience as competitors and broadcasters.

For the first time in Australian free-to-air television history, there will be 43 dedicated Olympic channels across 7, 7TWO and 7plus free and in HD.

Edwina Bartholomew and Basil Zempilas will be commentating the cultural components of the Opening Ceremony and will be joined by Hamish McLachlan, Johanna Griggs and Australian flagbearer at the Olympic Games Sydney 2000 Andrew Gaze for the Parade of Nations.

Jason Richardson, Emma Vosti and James Tobin will be across Tokyo making sure audiences are kept up to date with all the colour of the Games.

Sonia Kruger then takes the reins each afternoon in what will be her third Olympic Games with Seven.

Both women will be joined by Olympic Games broadcast newcomers Lisa Sthalekar and Trent Copeland as they bring their perspective to the Olympic updates and help viewers navigate the 43 channels.

Following 7NEWS at 6.00 every night of the Games Mel McLaughlin and Hamish McLachlan will guide, inform and entertain audiences through prime-time Olympic Games coverage. Keeping viewers up to date late into the evening will be Abbey Way

7NEWS.com.au will be the #1 online destination for Olympic news and updates. The website will feature a dedicated hub for results and medal tallies, plus all the latest breaking news, exclusive content, in-depth features and the greatest stories from the Games.

16 days after the Olympic Games the Paralympic Games being with Johanna Griggs, Jim Wilson and Paralympic gold medallist Annabelle Williams anchoring the coverage across 7, 7TWO and 7plus featuring up to 16 live streams.

Seven released a series of comments on its Tokyo Olympics coverage:

“The Olympics are for all Australians, and with Tokyo 2020 we’re offering more to everyone than ever before. Most incredibly of all, it will be available for free, something never before offered in Australia.  We can’t wait for 24/7 to bring the biggest broadcast and digital event in Australian history to life.”

“Just like our Australian athletes, our team is a mix of veterans and debut broadcasters. We have a breadth of experience, knowledge and the skills of a new generation to complement what promises to be an incredible Games in our own time zone. Tokyo is getting ever closer and we’re looking at milestone performances and practically unknown young athletes who’ll blow our socks off and become instant household names. One thing is for certain; our team and all Australians are going to experience the awe of the greatest event in sport.”

“Seven stands alone as Australia’s Home of the Olympics and, once again, we will bring unrivalled expertise to our coverage of Tokyo 2020. We will unashamedly get behind the Australian team with the rest of the nation, but we will never ignore the stories of the rest of the world – a compelling story is a compelling story regardless of nationality. Tokyo 2020 will be the greatest event you’ll ever see and you can trust Seven and our extraordinary team of experts to take you inside every single event, to where the best action is happening at all times.”

“Australia has had some unbelievable Olympic Games teams in the past, but when you look at our team for Tokyo, sport by sport, it’s quite remarkable. We are so lucky to have world champions, world number ones and major winners, everywhere. It’s exciting, inspiring – and very humbling – to be part of a Seven commentary team that includes Olympic legends like Ian Thorpe, Anna Meares, Steve Hooker and the iconic Oarsome Foursome’s Nick Green. This year’s Olympic Games will see new sports, new faces, old faces, and the world’s best against each other. It’s the world’s biggest festival of sport, and I can’t wait for it to begin.”

“Having the privilege of working on an Olympic Games is the stuff of dreams in our line of work… I can’t believe I get to do it again. When you look at our team, and dare I say it, the extraordinary high level of female participants across so many sports, the expectation tends to rise rather quickly. Our team can’t wait to bring home all the stories, the highlights, the goosebumps… and I think we’re about to do it in a way never seen before.”