• 48 out of 56 regular season matches broadcast in prime time

The 2020-21 rebel Women’s Big Bash League and KFC Big Bash League fixtures have been announced, with both leagues to feature full schedules and more matches than ever before to be televised live by broadcasters Seven and Foxtel.

In a further win for fans, KFC BBL|10 is scheduled to see 48 out of 56 regular season matches broadcast in prime time, eleven more than last season, with a further four twilight matches. Every KFC BBL|10 match, will again be broadcast live on Fox Cricket and Kayo Sports, with Seven to televise 45 matches including Finals.

Dobson described the expanded broadcast presence as a win for supporters and a significant achievement against the backdrop of the challenging COVID-19 environment.

“As the BBL approaches its tenth season, the League, our Clubs and our Partners are doing everything possible to ensure that we are set and ready to go for a great Summer of Big Bash,” Dobson said.

“By sharing these schedules at this stage, we hope that our fans, clubs, players and partners can all share in the excitement of the return of everyone’s favourite cricket competitions.

“While we know that the challenging, fast-changing coronavirus pandemic could ultimately mean revisions to the schedule, there is nonetheless a lot to like about the way both competitions are shaping up. It is our sincere hope that the WBBL|06 and KFC BBL|10 will go some way towards lifting the spirits of, and restoring a sense of normality to, the nation.

“Our Clubs should be commended for their determination and commitment to delivering a full 59-game season for the rebel WBBL|06.

“We’re delighted Seven and Foxtel will be showing 26 matches of the rebel Women’s Big Bash League live in the 2020-21 summer. The rebel WBBL is the world’s best cricket league for women and keeps getting better, which was reflected in a 21% increase in multichannel audiences last season.

“We’re also on track to host a fan-friendly KFC BBL|10 season that focuses on bringing high quality, entertaining cricket into Australian lounge rooms at prime time throughout the December-January period.

“As with all sporting competitions around the world, we must remain vigilant and agile in responding to the COVID-19 situation as it develops and we will continue to work with all relevant federal and state government agencies, biosecurity experts, venues, clubs, players, broadcast partners and our own internal teams to ensure a safe and successful summer.

“We’ll continue to act in accordance with public health advice and government protocols to ensure the safety of the public, players and support staff.”

Lewis Martin, managing director Seven Melbourne and head of network sport, said: “The WBBL has become the premier domestic women’s T20 tournament in the world. And our World Champion international stars will again headline an exciting and unpredictable season.

“The BBL competition will get off to a flying start with the opening five matches following each day’s play of the first Test match against India. It’s a consistent feast of mega days and prime-time cricket right through the summer, culminating again in a thrilling five-team finals series.”

Matt Weiss, general manager of Fox Cricket, said: “This year’s WBBL and BBL schedules are fantastic for our Foxtel customers.

“We have listened to what they want and CA have worked hard to deliver a terrific schedule of both competitions.

“Fox Cricket is the only place you can see every BBL game live with no ads during play. We have every exclusive game except one in prime time this year which our viewers will love.

“With the WBBL we are not backing off after the success of the Women’s T20 World Cup – Fox Cricket will be showing more this summer than any network which shows our commitment to the continuing growth of women’s sport.” 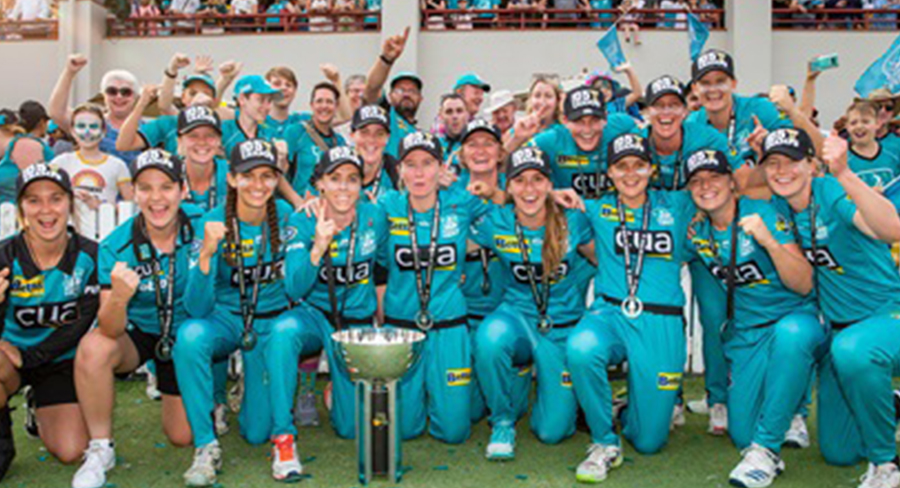 The rebel WBBL|06 fixture builds on the tremendous success of the League’s inaugural standalone season in 2019-20. A full 59-game season has been scheduled, with key weekend broadcast positions and national footprint across October and November.

This is complemented by the introduction of a three-week, mid-season Sydney hub for all eight clubs. The League has considered biosecurity, broadcast and operational requirements in its decision to create the hub, which provides added flexibility to the fixture in the current COVID-19 climate.

Fans will once again be able to watch every rebel WBBL|06 match live, with the 26 televised matches complemented by live streams of the remaining 33 matches on the CA Live app and cricket.com.au. All matches will be streamed on Kayo Sports.

“Our Clubs should be commended for their determination and commitment to delivering a full 59-game season for the rebel WBBL|06, along with the commitment shown to the WBBL from our broadcast partners Seven and Foxtel to bring more of the WBBL action live to TV screens across the country than any of the previous five seasons of the competition,” Dobson said.

“The rebel WBBL is the world’s best cricket league for women and keeps getting better, which was reflected in a 21% increase in multichannel audiences last season.

The season is scheduled to begin on the weekend of October 17-18, highlighted by a rematch of the rebel WBBL|05 Final between defending champions Brisbane Heat and the Adelaide Strikers. This season’s three-match finals series is scheduled to be played from November 27-29 with times and venues to be confirmed.

“The first standalone season of the rebel WBBL was an incredible success and we’re confident this season will continue that trend,” Dobson said. “We’re thrilled to be able to deliver more television games than ever before and welcome back the stars from Australia’s record-breaking, T20 World Cup-winning team after their historic victory at the MCG in March.

“The League is pleased to have delivered a fixture that includes matches in each club’s home market while also reducing the overall travel burden on clubs.

“By focusing parts of the competition in a central location (Sydney), it also provides optionality should the COVID-19 situation affect the flow of the season and we remain vigilant in all aspects of our planning to provide a safe environment for players and staff.”

The League and clubs will make further announcements regarding crowds and ticket prices closer to the season.

The tenth staging of the KFC Big Bash League will be a must-watch for Australian families, with more prime time matches than ever scheduled across Seven, Foxtel and Kayo Sports.

Following extensive consultation with clubs, broadcasters and other stakeholders, the League opener is scheduled to be brought forward to December 3 with the Adelaide Strikers to host the Melbourne Renegades. That match is slated to take place after stumps on day one of the first Test between Australia and India at the Gabba.

Regular nightly matches are scheduled to continue through to Australia Day. Accordingly, the regular season is scheduled to finish within the school holiday period.

The five-match KFC BBL|10 Finals series has been retained, with the Final to be played on Saturday, February 6, 2021. Dates of the other Finals series matches will be released as they are locked in towards the end of the competition.

“The KFC Big Bash League enters its tenth season as Australia’s most-watched sporting competition on a per-match basis and a highlight of the Aussie summer,” Dobson said. “We’re proud to have developed a schedule with our broadcast partners that is designed to deliver more games in fan-friendly timeslots.

“Scheduling in the time of coronavirus is not without its challenges, as we have seen in elite sporting conditions at home and abroad, and there are factors outside the League itself which could impact the fixture at a later date.

“That said, at this time, we are happy with the fixture as it stands and excited to celebrate a decade of Big Bash with Australian fans during the summer.

“It should ensure that more BBL matches are played in prime time and enable the regular season to again finish inside the school holidays which was a key objective, particularly in light of the busy international schedule planned for the coming summer.

“We will also be making more announcements in due course about enhancements to the League that we are confident will excite and delight fans across the country.” 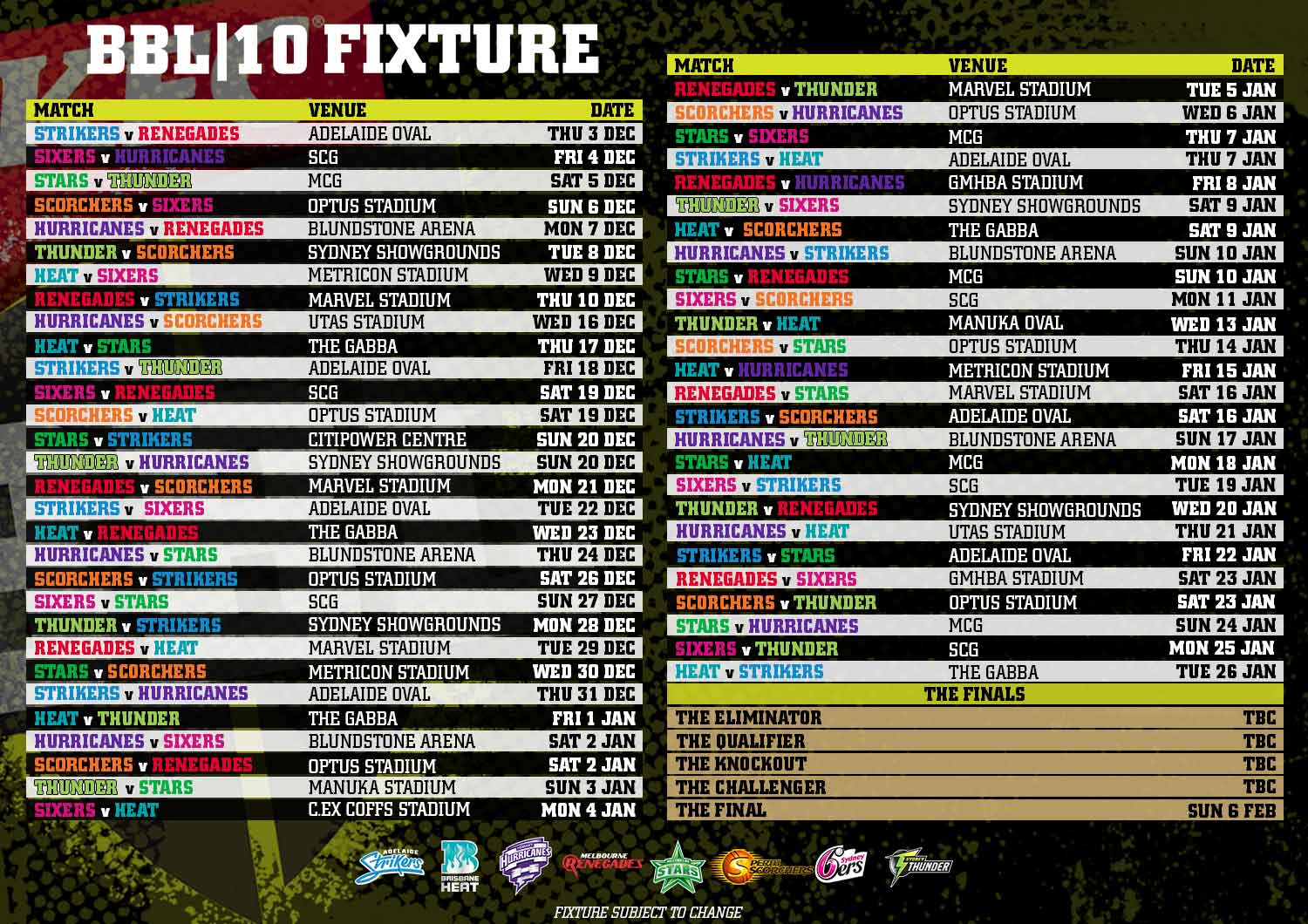