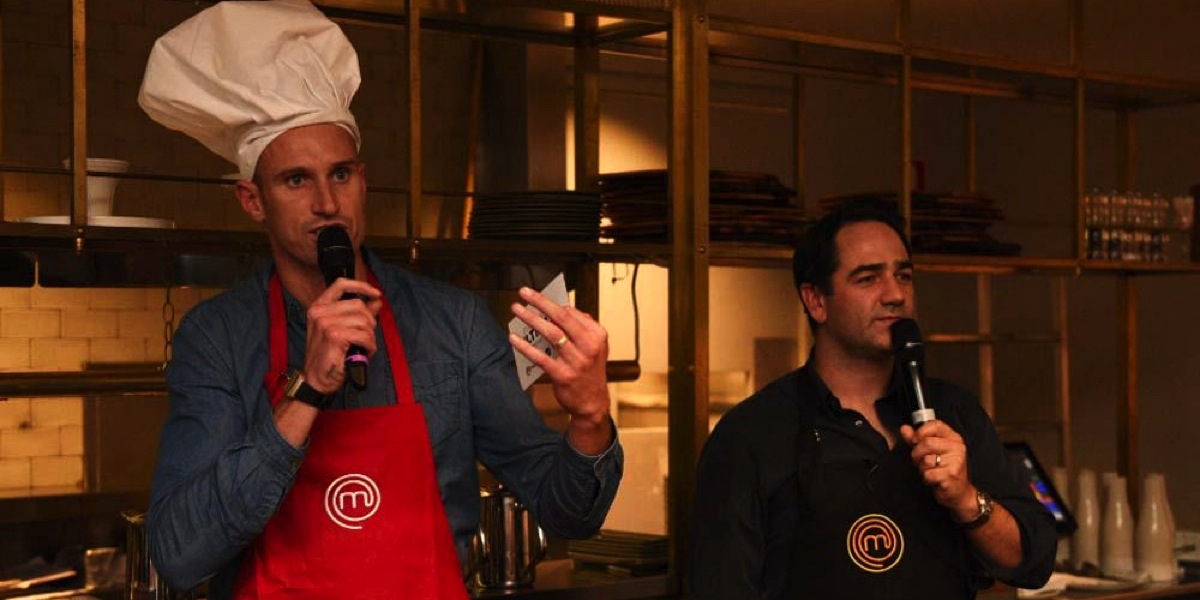 Nova breakfast hosts Fitzy and Wippa aren’t shy of a bit of competition, and last night at Woollahra’s Hotel Centennial the competition between the pair about who was the better cook was settled once and for all – by none other than MasterChef‘s Matt Preston and Gary Mehigan! George wasn’t in attendance, Mehigan telling the crowd that he was getting a backwax.

As befits a dinner party, guests arrived to the music and cocktails, having the choice between the Wippa, a coffee-infused Campari number, and the Fitzy, a mint and citrus-flavoured drink. The boys’ love for MasterChef Australia was quickly established, with Fitzy asking the crowd “Who else is sick of renovation shows?” In the crowd of 100 or so, Mediaweek spotted Kate Ritchie and one of her co-hosts Tim Blackwell, Nova 96.9 program director Shaun Heron, EP Tom Ivey, publicist James Toovey, Confidential on Nova‘s J.Mo and his producer Sophie Ainsworth, and the soon-to-depart producer Sarah McGilvray. Ten senior publicist Heidi Packer was also there, alongside a number of Ten talents.

Guests, who included key Nova and Channel Ten personnel, listeners and friends of the show, heard briefly from breakfast newsreader Matt de Groot, who was the evening’s MC, about what was in store. When he threw to Preston about what he was anticipating, Wippa interrupted a long and very MasterChef monologue about the feelings involved in cooking to say “Mate, it’s just chicken”. Dinner was promptly served by the hard-working team at the Hotel Centennial (although both Fitzy and Wippa were seen dancing around in the kitchen), with either chicken (Fitzy) or beef (Wippa) alternating around the tables. TEN’s Natarsha Belling quipped, “I thought that the boys were actually cooking every meal, so I had spaghetti with the kids before I came!”

Part of the ultimate dinner party was the chance to mingle with celebrities, including Dr Chris Brown, who picked Wippa to win “because he’s fat”, and Tim Omaji (formerly known as Timomatic), who got a laugh from the crowd by saying “Being the only African here, I’m here to represent the chicken lovers” and Julie Goodwin who poured cold water on Mehigan’s judging by telling him to “Have a cup of concrete”. After a delicious dessert, consisting of Fitzy’s chocolate fondant or Wippa’s eton mess, the judges were tied with the boys on 17 points each, throwing it open to the crowd to decide the winner. Resounding applause for Fitzy ensured he won the chef’s hat, while Wippa left with the wooden spoon.

Guests left with a giftbag containing a Fitzy and Wippa branded wooden spoon, a MasterChef oven mitt, a bottle of Grampians Olive Co. olive oil and a cookbook from either Preston or Mehigan.