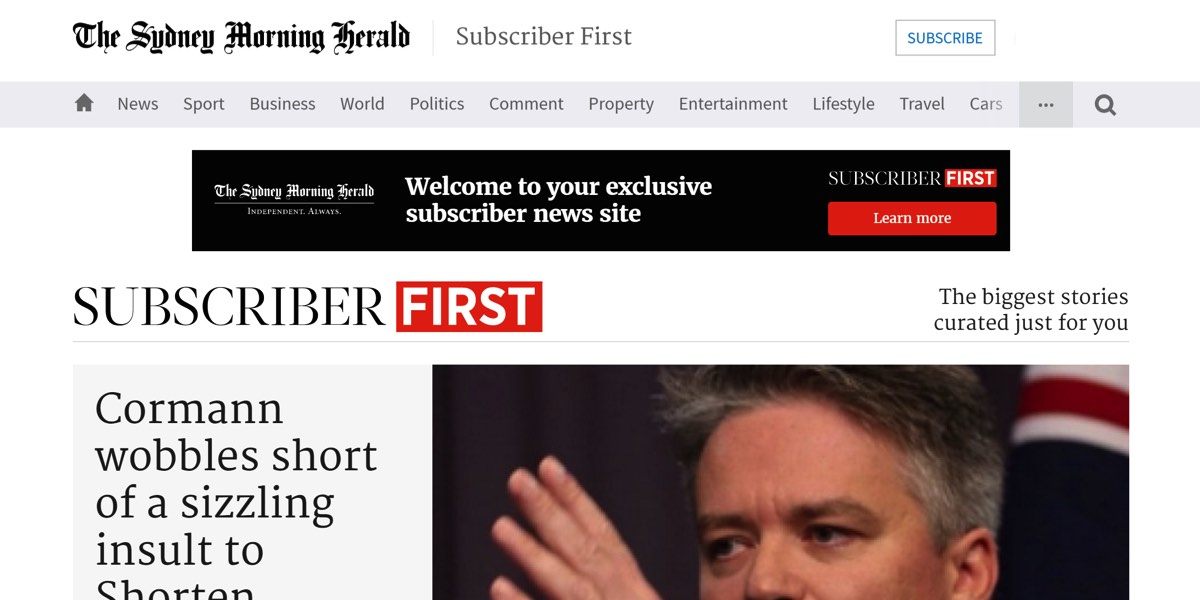 As digital disruption continues to impact the print press, newspapers have become increasingly drawn to revenue from subscribing readers, often establishing paywalls to provide an incentive to pay for content online. As competition for the audience dollar builds, publishers have needed to establish a greater value proposition for readers to pay.

For Fairfax, this value adding has taken the form of its new subscriber-focused platform Subscriber First.

“What we’re trying to do is offer context to the content, try to provide behind-the-scenes content as well as the most important news stories as they break.”

National subscriptions editor David Rood told Mediaweek that the decision to launch the Subscriber First initiative stemmed not from market consultation, but rather the understanding that the publisher needed to offer loyal readers deeper insights and access. Ultimately, it was just a good idea.

“I was appointed in May and it’s the first time Fairfax has had this role. What we’re trying to do is to better reward subscribers. The strategy is how do we show subscribers the best of our content? How do we tap into the reasons why they are subscribing?

“That is why we started off with a subscriber-only newsletter strategy,” he explained. Subscribers to The Age and The Sydney Morning Herald will receive access to the Subscriber First web page. Twice a day the page updates, once at noon and again overnight, offering exclusive articles that feature insights by journalists into featured stories, as well as other news stories reflecting the day’s rolling news.

It is expected that the content will be a mix of opinion and factual news reporting, but that will depend on the news of the day.

“What we’re trying to do is offer context to the content, try to provide behind-the-scenes content as well as the most important news stories as they break,” Rood advised.

In addition, a weekend newsletter is being offered to subscribers, with the first edition sent out on Fridays at noon. The newsletter offers exclusive access to the content, stories, and analysis that will otherwise be published in the weekend editions. It is to be used by Fairfax to highlight the value that readers regularly receive from their subscriptions.

“We’ll bring on board an editor-in-chief for the newsletter in a couple of weeks, one from Melbourne, one from Sydney.

“You get the chance to read 7-8 hand-picked really interesting things before anyone else. That’s real value in your subscription. It’s not just about promotion,” Rood said.

ALSO: The Age editor-in-chief Mark Forbes on the future of M-F print edition

When Mediaweek spoke with Rood last Friday, just moments after the first weekend newsletter was sent, he offered as an example: “If you are in Sydney, you just got a Kelsey Munroe feature on China and the politics of buying power assets. You’ve got the travel cover too, all those articles there for you to read before anyone else gets them.”

Fairfax has joined a number of publications globally that offer digital exclusive content for subscribing readers, each with a unique offer that is tailored to the individual needs of the publication and its readership.

While Rood dismissed the idea that he was looking to a specific publisher for inspiration for how such a model would work for Fairfax, he admitted that he has paid attention to the approaches taken by other high-profile publishers.

“Something like the New York Times Insider is an interesting product. It’s not really the same though [as Subscriber First] as it’s more like a behind-the-scenes of the newsroom product. We were informed by that and other ideas, but we’re not really trying to replicate any particular product. Ours was conceived in-house,” he said.

What news brands around the world are doing for their subscribers


Publishers across the globe are looking for ways to provide additional value to their digital subscribers. Digital add-ons from some of the world’s best-known mastheads include:

• The Times – A Times+ subscription comes with additional benefits like discounted tickets to events, partner offers, member-only events like Q&As and private museum viewings, and free ebooks. These ebooks include collections of stories from the EFG Short Story Awards 2015, 30 Years of Rugby by newspaper rugby correspondent Stephen Jones, and biographies on Nelson Mandela and Margaret Thatcher.

• The Wall Street Journal – Like The Times+, a WSJ+ subscription delivers exclusive offers and experiences, but also access to exclusive WSJ Talks. Recent talks included sessions with Washington bureau chief Gerald F. Seib detailing the unusual nature of the 2016 US election and cheese specialists on how to build a better cheese plate.

• Variety – The show business trade publication subscription provides conference and event discounts, along with archive access to the last 15 years of Variety, production charts of every film and TV show currently in production, and a Vscore list of the top 250 most familiar and appealing actors working today.