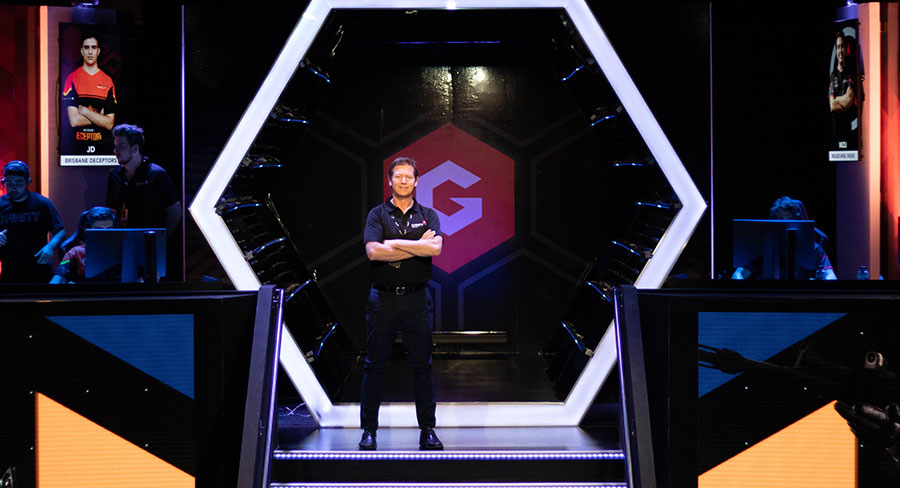 The new esports league Gfinity Elite Series Australia has just finished its second weekend of games at its inaugural tournament.

The games are being staged at the new Gfinity Elite Series stadium at the Hoyts Cinema Complex at Sydney’s Entertainment Quarter.

We visited the stadium during a recent match where we met with CEO Dominic Remond, who spoke about the Australian launch and also took us on a tour of the facility and the teams making it work behind the scenes.

HT&E has partnered with a UK private company Ikon Media & Events and the listed UK business Gfinity PLC. Remond explained that Gfinity PLC developed the Elite Series for the British market in 2017 and now Australia is the first expansion territory. Behind the scenes at the Gfinity Elite Series stadium

With competitive leagues now running in the UK and Australia, it seemed obvious to ask if that might eventuate in an international Ashes tournament.

“That is the long-term goal, a Champions League of all the Elite Series winners. At the moment it would be Australia versus England. However, Gfinity has just run FIFA E-League qualifiers in North America and it is looking at other territories.”

In Australia there are six city-based clubs in the Elite Series. “In each club there are three different teams,” explained Remond.

He said there is a “medium-term” ambition to make the League profitable in Australia. “We are really about wanting to generate more interest in esports and attracting more eyeballs and commercial interaction. From a marketers’ perspective we are reaching a millennial audience, which is very difficult to reach through other forms of media. We estimate there are about 1.5m esports fanatics in Australia. They are fans that regularly watch, attend and buy merchandise. We know they have about 20% higher disposable income and 65% of them are under the age of 30. It is a very attractive audience for brands.”

“Our league is a franchise model so the clubs pay a fee to join the league. We then distribute revenue back to the clubs to help them operate.”

The initial plan is to run two seasons a year. The current first season will run until July and the second will start in October and run into November. “Part of our ecosystem is having a connection with grass roots. We have run an online program called The Challenger Series for amateur players around the country.”

The best players from that series go into a draft with clubs able to complement their existing players with this new talent. This allows the clubs to fast-track amateur talent from their bedrooms to the gaming consoles of professional clubs.

Clubs in the Gfinity Elite Series are free to compete in other tournaments across the year. Part of the attraction for players to return to the Gfinity events is the $225,000 prize money per season.

The first season is being broadcast on Network Ten’s multichannel ONE and it can also be watched via the online gaming network Twitch.