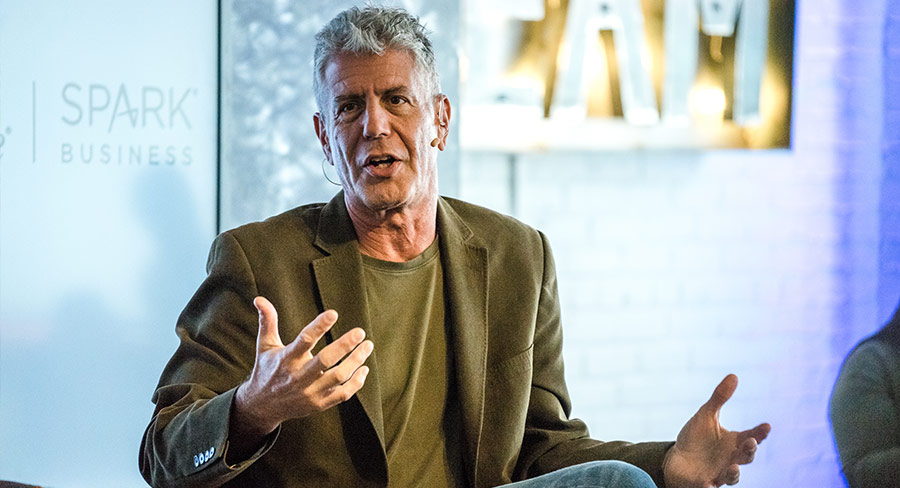 * This interview appeared in Mediaweek magazine in 2013 when Bourdain joined CNN.

Although he has only just started on air at his new home at CNN, Anthony Bourdain signed the deal to start making a new series with the global news channel close to a year ago, he told Mediaweek recently.

“I was initially surprised by their offer,” he added. “My first thought was this was a worldwide news organisation with experience and personal and resources on the ground in a lot of the places in the world that I have so far been unable to shoot in for various reasons. Places like the Congo, Libya and Myanmar. I doubt any other network would have been willing to let us go to those places.

“CNN also gave me a wider brief. It offered me the ability to work with the same people, anywhere I want and the way I want, without having to change at all. If I want I can stay just as silly, but then be more serious when I feel like it.”

The ratings for the first episode which went to air in mid-April were good news for CNN. “I believe the channel is very happy and I can say I’m extraordinarily happy. They have been putting all of their muscle behind promoting the show including their on-air talent and journalists. Everybody has been very welcoming and supportive. These are people with experience in all parts of the world including Afghanistan, Middle East and Africa.”

Bourdain said they are getting immediate feedback from people in the places they are covering as the show is broadcast globally at the same times. “We know right away if we got it right or screwed up.”

Bourdain has been a prolific maker of television over the years. Working with TV production company Zero Point Zero all the time, the travelling culinary adventurer and author has over 140 episodes of No Reservations in syndication around the world. Bourdain said the CNN series won’t be travelling only to places not accessible to the average tourist. “We will continue to visit places like France and Spain too as I always did. I want to keep mixing it up and keeping it fresh. We can even go back to places we have been before and look at them from a different perspective.” One of Bourdain’s early episodes in the first season of Parts Unknown was a trip to Los Angeles’s Koreatown.

The new series has kept the best parts of the No Reservation recipe, yet ramped up the production values and the examination of the country that the show visits.

When we spoke with Bourdain he revealed he had shot about nine episodes of the new series. “It is the same crew working with me, but we are working with a lot of new toys. We have upped our game when it comes to the look, sound and feel of the show. For me personally, I’m still a storyteller as I was before. To have those new tools at my disposal makes me very excited.”

Bourdain said there is a lot of pre-production research for every location and a wish list of things he would like to focus on. “Then we start looking for local contacts – from food bloggers to professional media fixers. Our selection process is very, very careful and we have found it is important to get the right person. They then spend a lot of time hunting down our wish list of scenes and then maybe suggesting others. After a long period of back and forth with our people on the ground my crew and I fly in. We shoot for about a week to 10 days and then there is a period of post-production between six and nine weeks. That involves editing, writing, re-editing, rewriting, colour correction, scoring. It can be a pretty lengthy process.” Bourdain is shooting almost constantly between the months of November and August. The show doesn’t always need sunny skies. “A couple of my producers love bad weather. They see good weather uninteresting and bad weather as dramatic. If there is rain or snow and things are really miserable, they think that is just great. Obviously if you are shooting a beach barbecue you would prefer it not to rain, but beyond that they like it bad.”

The Parts Unknown team has two camera people and a producer that can pick up a camera if need be, said Bourdain. Sometimes the crew may arrive a day early or stay a day late while Bourdain heads off to the next location. “It is a luxury if our schedule allows us to do that.”

CNN has contracted Bourdain and his team for 16 shows this year. That is about as many as they used to make of No Reservations, although Bourdain did note he won’t be doing any additional filming. For the US Travel Channel he also used to shoot The Layover, which tracked him in a new city for 24-48 hours.

Nothing ever seems to upset Bourdain too much. We asked him if he was always calm and collected off-camera too. “It depends… generally I guess. I’m not somebody who is obsessed about being famous or being on TV. I like what TV allows me to do.”

When asked about how he manages to eat so much food, much of it fatty or rich, Bourdain revealed there is a strategy. “If we have just filmed a show in Italy, then the next one is not going to be in France. Or we all gain 15 pounds. I eat and drink an extraordinary amount on the show and it is important I eat all of it. I’m not just taking a bite for camera.”

Earlier in 2013, Bourdain got to experience primetime network TV with a role on The Taste, a big budget cooking show on the US ABC network. One his fellow judges, and a co-executive producer, was Nigella Lawson. “It was some of the most fun I have had in my life. It was a real change for me – a big, flashy network show. I am good friends with Nigella and I was really looking forward to working with her. It was very different from anything I have done before – I would love to do it again and I hope it gets picked up for a second season.”

“I have a lot of friends in Australia and I have had for a quite a long time. For me it is very familiar, very comfortable and always an enjoyable experience. Most of those people are in Sydney and Melbourne.” As to the chance of a visit for CNN? “I would say that is inevitable.”