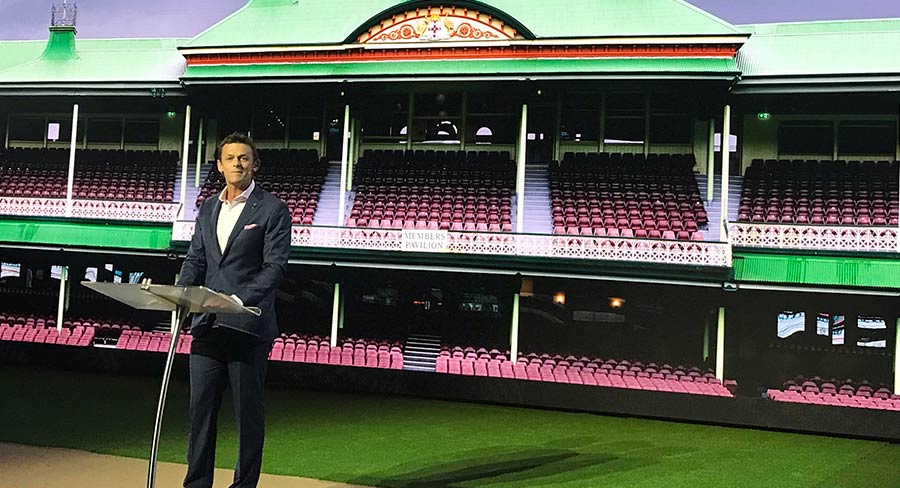 Foxtel last night officially launched the new home of cricket, Fox Cricket, signalling what it is calling a new era for cricket broadcasting in Australia.

Foxtel and Seven secured television rights for six years earlier this year in a deal worth $1.82b in cash and contra air time. As part of its deal, Fox Sports secured digital rights for its platforms.

The new channel launch saw the inside of the Hordern Pavilion turned into a mini-replica of the SCG complete with grandstand seating for the guests, a wraparound video screen wall and a cricket pitch where hosts Adam Gilchrist and Jessica Yates hosted the launch.

The event was full of agency executives, News Corp executives and soon-to-depart editors from The Australian, The Daily Telegraph plus The Courier-Mail, media from around Australia and an army of Foxtel and Fox Sports executives.

The attention to detail inside even included a music group – a string quartet plus a trumpeter and a conductor – who played a version of the channel’s new theme in the background during the presentation.

Foxtel CEO Patrick Delany never goes anywhere without massive, hi-res screens to tell the story and they were again the star attraction last night, along with Richie Benaud’s widow Daphne, who stole the show when she presented Gilchrist and Brett Lee with Richie’s lip microphone he used throughout his broadcast career. If ever there was a symbol of the passing of the rights from the old broadcaster to the new, that was it.

Gogglebox Australia stars – and massive cricket fans – the Delpechitra Family also attended and were much in demand on the red carpet.

Shane Warne is on a book tour in the UK, but he hosted a brilliant mini-doco about growing up with cricket, which included career highlights and even details about his celebrity friends!

Brett Lee provided a glimpse of India filmed on a busy street surrounded by cricket fans.

The Fox Cricket package offers the cricket fan everything:

• All men’s Test Matches, One-Day and T20 Internationals played in Australia plus every game of the Big Bash League.
• Every women’s international in Australia, the ICC World Twenty20 and 23 WBBL games.
• The Sheffield Shield Final, the Prime Minister’s Xl and the Governor General’s Xl.

Fox Cricket lives at Foxtel channel 501 while viewers can also watch much of the coverage in 4K if they have an iQ4 set-top box on channel 444.

The channel has already commenced broadcasting.

Foxtel is aiming to showcase the complete Fox Cricket experience with its first 4K broadcast on November 4 when Australia takes on South Africa in the first ODI. Across summer, fans will be able to watch every men’s international Test, ODI and T20 match played in Australia plus 16 BBL matches in 4K on channel 444.

Fox Cricket has assembled 31 commentators with 23 new faces and six female commentators who between them made 1,371 Test appearances and 154,472 runs. The team includes six national captains.

“The biggest lineup of cricket led by the best commentary team with the most in-depth opinion, analysis and entertainment, all in the one place.

“We also have plenty of innovations and tricks up our sleeve to enhance the experience while the others are taking ad breaks, as well as the way in which we will analyse and deliver the nuggets of insight viewers will only get with Fox Cricket.”

Cricket 360 will be hosted by Gerard Whateley and Robert “Crash” Craddock.

Craddock will also host the award-winning Cricket Legends, sitting down with the biggest names in the game with fans able to relive the matches that made legends on Fox Cricket Classics.

Gus Worland will deliver his unique insights on what it’s like to be a fan on the all-new The Cricket Tragic, while James “The Professor” Rochford has been let loose on cricket with his own show The Night Watchman.

Fox Cricket will launch a new app, launching in time for the Australia v South Africa ODI Series, which promises to bring fans closer to the action. Free to download, the app delivers a personalised experience for fans and features all the latest news, fixtures, scores, stats and video from across the world of cricket.