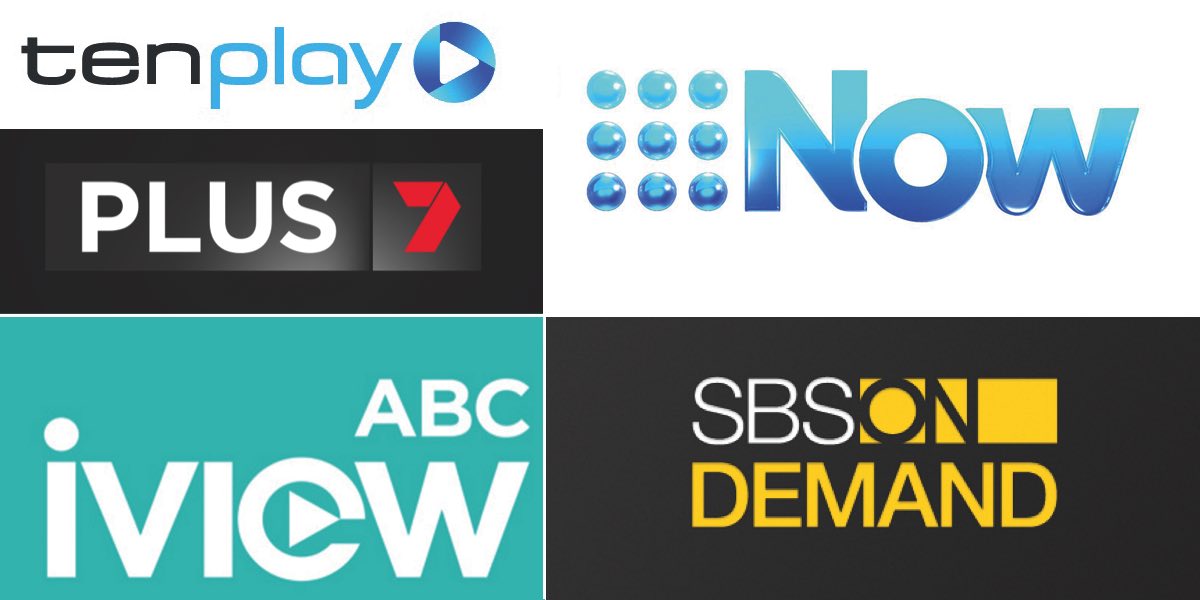 This is the year that Australia’s FTA TV broadcasters have all embraced online in a meaningful way, writes Mediaweek’s Dan Barrett

With our free-to-air broadcasters embracing live linear streaming of their broadcast channels and stronger commitments to their catch-up content, 2016 will be remembered as the year that Australian broadcast television truly embraced multiplatform distribution of its content.

Further establishing the online footprint for Australian FTA broadcasters, Freeview has recently announced plans to develop an online portal built for mobile use that will draw together all of the content available on the networks’ online services and deliver them in one app. The app is expected to deliver not just on-demand content, but also live simulcast streams of each of the broadcast channels.

Freeview chief Liz Ross has advised Mediaweek that the mobile app will be available soon: “We’ve got the complexity of integrating all of the streams from all of the networks and that will take time, but we have a third party who’s doing the build. We’re actually well down the track. You’re going to see it inside a few months.”

Aggregating all of the content into the one app is a major step forward for Australian broadcasters, with many viewers complaining about the online fragmentation of services that they have traditionally found bundled together.

“For a change, free-to-air and Freeview are working on a product that is actually ahead of what is already in the market,” Ross said.

Notably, tenplay is also the only free-to-air broadcaster to strike a deal with Apple to include the service on previous generation Apple TVs. The fourth generation Apple TV, which launched late last year, is now an open ecosystem that allows any content distributor to serve content through the platform. As such, tenplay is now joined by other Australian broadcasters on the platform.

Since launching in September 2013, tenplay has seen 2.56 million downloads of its mobile app. The network reports video viewing on its site has increased 16% year-on-year. When asked about specific milestones for the start of 2016, Ten has reported that: 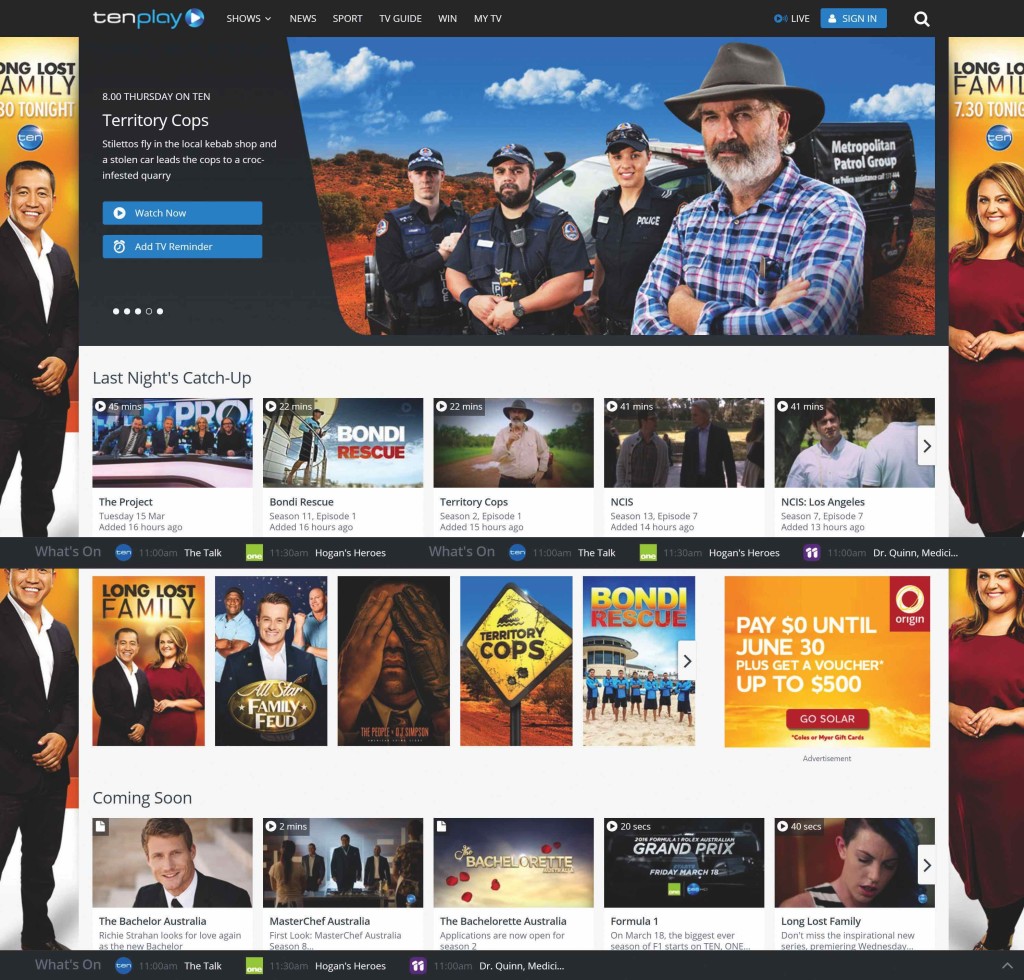 Nine kicked off the year with the launch of its new platform 9Now. The network junked its previous online service 9Jumpin, which began life as a TV check-in app built to compete with Seven’s Fango and Ten’s Zeebox. As check-in apps proved to be a very short-lived fad with limited take-up, Nine evolved Jumpin to also support video catch-up content.

As Nine evolved its strategy, the launch of 9Now gives the network a dedicated video catch-up service along with the capability of launching dedicated streaming simulcasts of each of its linear channels. 9Now launched with a simulcast of its primary channel, with additional channel simulcasts expected before midyear.

So far, the 2016 Academy Awards has been the most-streamed event on 9Now. The network reports that they generally see peaks during the morning for Today and in the evening for their news broadcasts. Spikes are reported throughout prime time, with incremental audience gains.

At launch, 9Now rolled out across the web, iOS, Android, HbbTV (branded in Australia as FreeviewPlus), and Telstra TV, with the promise of it soon launching on Apple TV, Chromecast, Sony, Samsung, LG, PlayStation, Xbox and Fetch TV. The content is the same on all of the platforms, with the exception of clips and promos not available on HbbTV or Telstra TV, along with Today Show highlights not available on HbbTV. 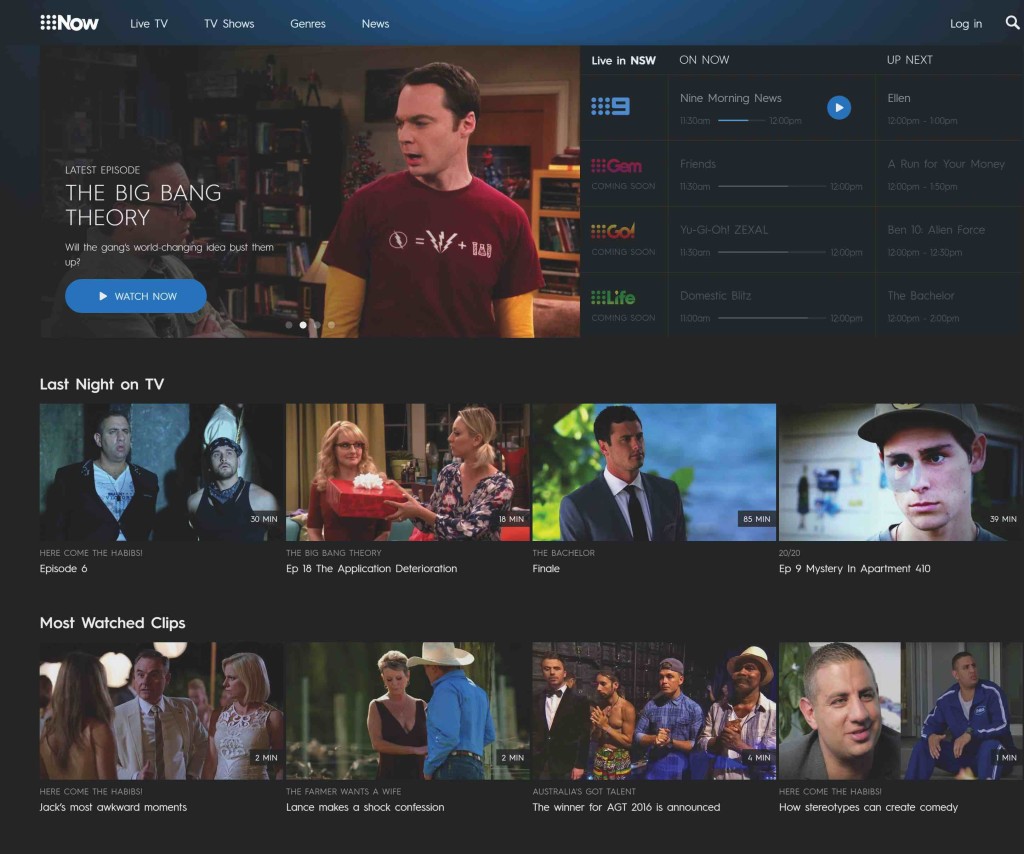 Seven revamped its online service PLUS7 in October last year in time to live stream the Melbourne Cup. With the relaunch of PLUS7, Seven introduced live linear streams for all of its channels. Currently, Seven is the only network to include live streams of every linear broadcast channel. Its new channel 7flix was available on PLUS7 on the day of the channel launch in February.

At the time of the PLUS7 launch, Seven digital chief Clive Dickens reported that almost everything that goes to air on the broadcast channels will be included in the linear streams, but where a program isn’t available to stream, viewers won’t just see their screens go dark: “There are no blackouts. If you are using a device or viewing a program where we are unable to stream either for legal or technical reasons, you will see alternative premium content.”

PLUS7 is the most widely available online service from a commercial free-to-air broadcaster, serving content via its website, iOS, Android, Telstra TV, Apple TV, Telstra TBox, Samsung TV, Sony TV, Playstation, Xbox, Fetch TV, HbbTV, and Humax. Seven promises that it will roll out across more over the top (OTT) and IPTV platforms over the coming months. Its most recent launch was on the Apple TV in December 2015.

Sport has been a significant driver of views for Seven’s linear stream simulcasts, with the network reporting high viewership for its live streams of the Australian Open, Melbourne Cup, and the recent US Super Bowl.

Later this year Seven will offer live simulcast linear streams of its Olympics coverage. In addition to PLUS7, the content will be streamed via a dedicated app which will be available for free across multiple platforms.  Seven promises that it will deliver:

Working in Seven’s favour is the viewer-friendly time difference, meaning most events will be available for broadcast and for streaming viewers to watch live between 6am and 2pm. 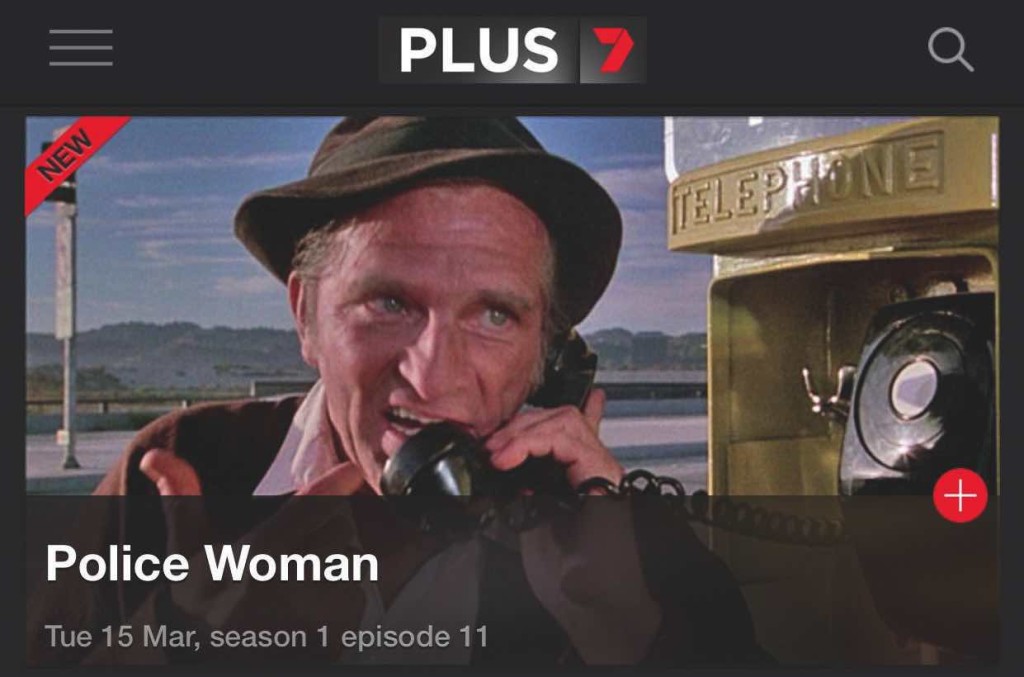 ABC has driven innovation in the online video delivery space for Australian broadcasters, launching iview in July 2008. Today it delivers not only catch-up content, but also live streams of its primary channel and ABC News 24, as well as content produced exclusively for the platform through its online-exclusive Arts and iview Presents channels.

Exclusive content includes the comedy series DAFUQ, the Annabel Crabb/Leigh Sales chatfest When I Get a Minute, film commentary show The Critics, and a video version of Radio National’s Download This Show, among other shows. SBS On Demand has been adept at embracing new and varied platforms. It was the first broadcast network in Australia to launch an HbbTV app and was the first broadcaster to build an app for the fourth generation Apple TV. While SBS is yet to simulcast any of its broadcast linear channels, SBS On Demand offers a rich library of alternative content that stretches beyond its broadcast offerings. It has a very strong focus on film, leveraging off its World Movies library and offering over 700 foreign films for free via the service. 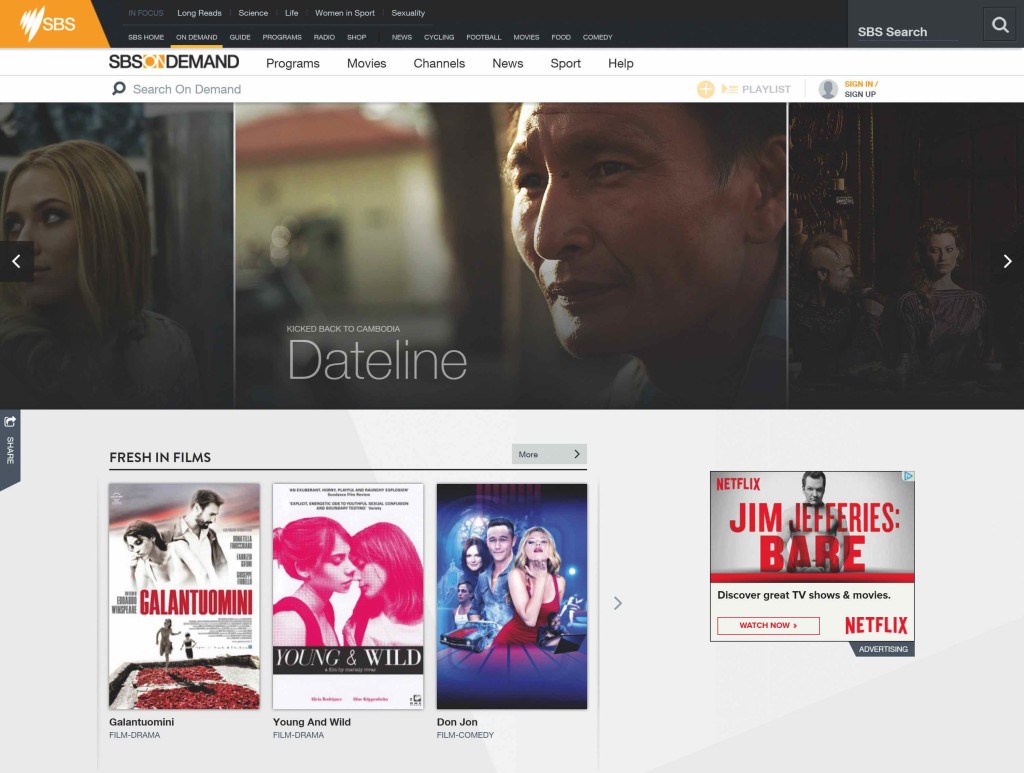