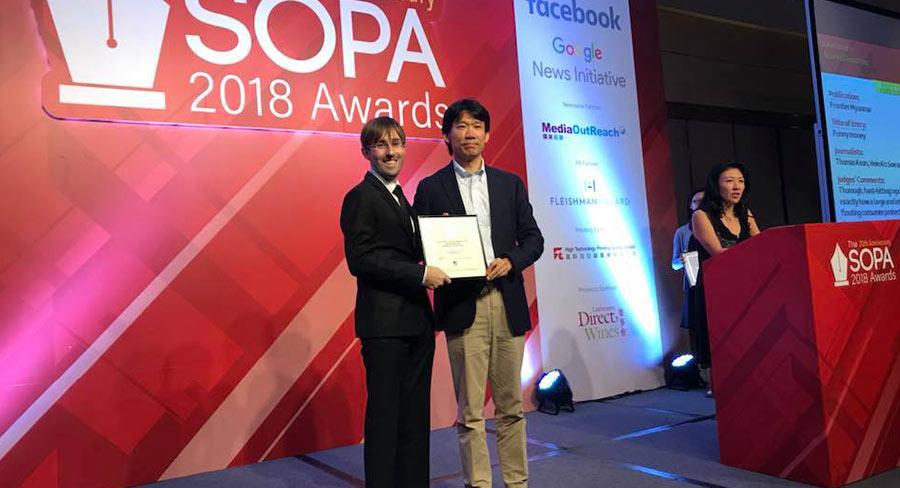 Australian journalist and digital editor of Frontier Myanmar Sean Gleeson’s honorable mention last week in the Excellence in Feature Writing category at the 2018 SOPA (Society of Publishers in Asia) Awards for an article that recorded the rise and fall of the Myanmar Times was somewhat ironical, coming only about five days after Ross Dunkley, Perth-born co-founder of the Myanmar Times, fell from grace after being arrested allegedly in possession of large amounts of drugs at his home.

The publication’s editor, Australian journalist Thomas Kean (pictured above), together with reporters Hein Ko Soe and Kyaw Phone Kyaw, won an award in the Excellence in Business Reporting category for a story about the shaky mobile money sector.

Southeast Asian streamer iflix has appointed Adeana Greenlee as global director of go-to-market and Tamim Fares as global director of engagement and monetisation. Greenlee founded Ogilvy Public Relations Myanmar, the country’s largest public relations firm. She joined iflix as general manager of iflix Myanmar, then general manager of iflix Indochina, where she was responsible for managing and expanding iflix’s business in Thailand, Myanmar, Cambodia and Laos.

Fares has more than a decade of experience with global technology and media organisations including Vodafone, STC and Leo Burnett. At Vodafone Qatar, he was head of consumer marketing/segments, responsible for setting commercial, channel, product and brand strategies for multiple consumer segments. The South China Morning Post has “incubated” Goldthread, an English-language platform focusing on food, travel and culture in China with an emphasis on video as well as editorial. Goldthread, available on Facebook, Twitter, YouTube and Instagram with a stand-alone website coming later this year, officially launched on June 19. SCMP’s Victoria Ho heads the Goldthread team as executive producer. Ho, a former editor of the defunct Mashable Asia, joined SCMP in February this year to work on a video project said to be modelled on Al Jazeera’s AJ+.

After nearly two years of what the Vietnam Investment Review called “strained negotiations” over the price of broadcasting rights for the 2018 World Cup, Vietnam’s national TV broadcaster Vietnam Television (VTV) announced reaching an agreement for World Cup rights at 6.30pm on Friday June 8. A Viettel representative revealed that the rights deal was almost US$15 million (A$20.3 million,) double the price of the 2014 World Cup’s TV rights, and about seven times higher than the 2006 World Cup at around $2 million.

Pay-TV operator Astro Malaysia’s Group CEO Rohana Rozhan has resigned, effective January 31, 2019, to be replaced by Astro group chief content consumer officer Henry Tan, who has been with the company for 10 years. Rozhan’s resignation came the day after the company announced that its earnings had dropped by almost 11% for its first quarter ended April 30, 2018, which in turn triggered further speculation that the company may go private. Astro said Rozhan’s resignation was due to her intention “to pursue other goals”, and she will remain on the Astro board as a non-executive director.

Taiwan’s live-streaming platform M17 Entertainment, parent company of Singapore’s Tinder-like dating and networking app Paktor, shelved its plans for a US IPO on June 15, with company co-founder Jeffrey Huang – a veteran rapper who pioneered Taiwan’s hip hop scene – publicly lashing out at two investment banks. According to Bloomberg, Huang used “a four-letter expletive” on Facebook to express displeasure with Citigroup and Deutsche Bank, the lead underwriters of the sale.

Malaysia’s Astro Radio increased its share of listeners to 15.8 million weekly, or 78.2% of people over the age of 10 in peninsular Malaysia, according to the latest GfK Radio Audience Measurement survey. Malay-language radio station Era is the number one radio station in Malaysia, following a listenership increase to 6.8 million.

In Singapore, the latest Nielsen Radio Diary Survey showed Mediacorp strengthening its position as the top radio network in Singapore. The four most listened-to were all from Mediacorp, with the top three stations also increasing in listenership. With Mediacorp’s English radio stations, Class 95 pulled ahead of its competitors, adding 21,000 more weekly listeners, making it the number one English station with 774,000 weekly listeners. Contemporary hit radio station 987 added 79,000 listeners per week, the largest growth for any radio station in the market.

Thailand’s state majority-owned media group MCOT, the operator of two digital TV channels, has restructured by launching a new digital department to oversee new digital platforms that will fully use its news and information programming. Kematat Paladesh, president and vice chairman of the company’s risk management committee, said the launch of the digital platforms will diversify business risk in a decline in advertising spent on TV and a rising trend for other media platforms, especially online. He said, “Today, between 70% and 80% of MCOT revenue is from TV advertising. In the next two to three years, we expect half of our revenue will remain from TV advertising, and another 30% will be from radio. Meanwhile, 20% of our revenue will be from new digital platforms in the next two to three years, up from only 1% today.”

• Facebook and Google will have to install servers and establish representative offices in Vietnam from January 1, 2019 as the law on Cybersecurity, which was approved in the National Assembly on June 12, comes into effect. All foreign firms providing telecommunications and internet services and value-added services will be required to install servers and will also have to authenticate and protect users’ information as they register digital accounts.

• Simon Cowell’s Syco Entertainment, in partnership with FremantleMedia China, has launched Kid’s Got Talent on streaming service Tencent Video in China. The series is called Extraordinary Kid’s Got Talent in China and is sponsored by US pharmaceutical giant Wyeth.

• Singapore’s video streamer Hooq has appointed Andrew Marshall as its general counsel to help expansion in its five markets. Marshall has worked as legal counsel at ESPN and Disney.

• The European Union Ambassador George Edgar made an official visit to The Phnom Penh Post offices on June 13, where the Post Media CEO Ly Tayseng assured the ambassador that the newspaper’s legacy as an independent journal will continue. Tayseng said, “The newspaper is neither pro- nor anti-government, but is determined to present news that is independent, neutral and balanced.”