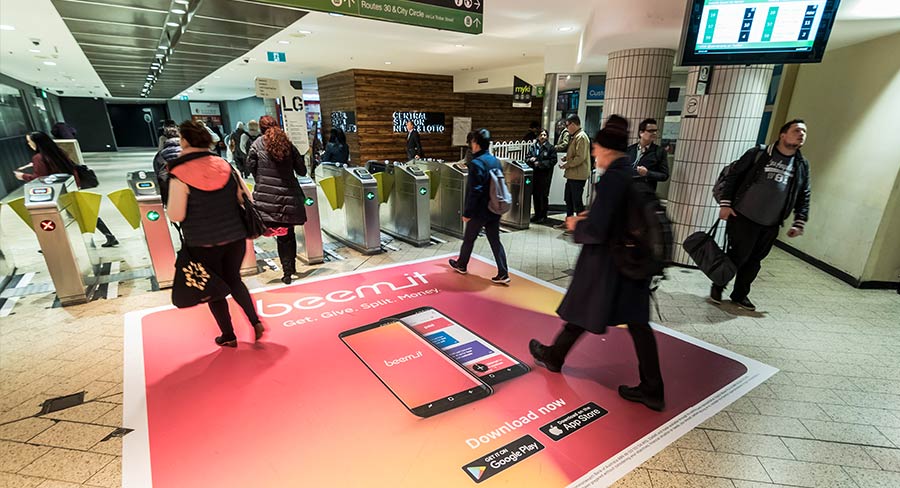 Adshel has been in the news lately with speculations about acquisition bids from APN Outdoor and oOh!media. However, today the news focuses on what Adshel offers advertisers.

Having completed the transformation of the Metro Trains Melbourne (MTM) network, Adshel today announces the launch of its full rail offering in Australia, reaching 1 in 3 Australians each week.

Coinciding with the announcement is the launch of Beem It. Adshel head of marketing and communications, Andrew Campbell said: “We’re excited to launch Beem It, an instant payments app that allows anyone to pay, request and split a bill with friends and family, across Adshel’s Rail network in Melbourne. This is the first campaign for us in out of home – and this solution helps us drive awareness through high-impact placements.”

By combining Melbourne and Sydney rail networks into packages, Adshel offers advertisers the platform to use dynamic, fully animated and video content to achieve cut-through and to extend their multiscreen strategy out of home. This allows them to connect and engage with 15 million commuter journeys each week. Adshel CEO Mike Tyquin said of the launch, “Adshel’s commitment to engaging key audiences at scale is front and centre with the rollout of MTM. We’ve completely overhauled the offering, reflecting the value of the rail audience and importance of the Melbourne market. The inclusion of MTM to Adshel’s product offering further complements our strategy to become the most impactful out-of-home business in Australia.”

Adshel’s Rail offering in Melbourne sees it claiming to be Melbourne’s #1 commuter media solution, reaching 96% of Melburnians every fortnight.