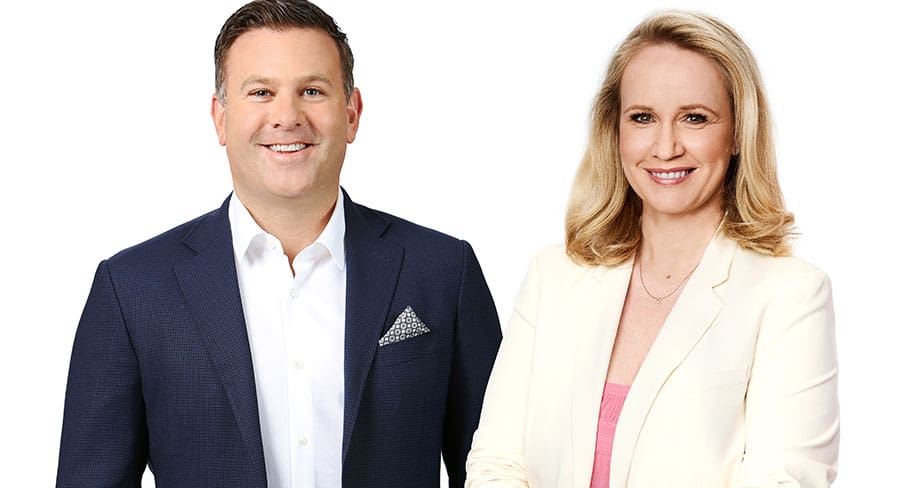 In March of last year, ViacomCBS Networks International announced the resignation of Paul Anderson as chief executive officer of Network 10 and executive vice president of its operations in Australia and New Zealand.

Then in November Jarrod Villani was named as chief operating and commercial officer and co-lead with McGarvey, Villani is now responsible for all the combined company’s commercial activities and operations in both markets.

Mediaweek spoke with both co-leads of the business about the new company structure and what to expect from ViacomCBS Australia and New Zealand in 2021.

How do co-leads work?

The pair explained that they both lead different parts of the business in an executive capacity.

Villani: “The way that we look at the role is not dissimilar to a CEO and chairperson type relationship. The CEO role for Bev is across the content and mine is across the operational and commercial side. When there are large decisions in either one of those areas then one will consult with the other.”

While the workload is pretty evenly divided, they also stated that there is plenty of parts where there is shared decision-making.

McGarvey: “Jarrod and I have very different but complementary skills. Our perspective is that we are quite fortunate that running a business this size, two people to drive that and make decisions is a really good thing.”

While this appears to be a fairly unique structure in the Australian media industry the pair pointed to other examples such as Louis Vuitton, where this structure is being utilised.

McGarvey: “It feels like a first for free-to-air TV in Australia but it’s not a first globally and it’s not unusual outside media.”

Villani: “If you have the right people with complementary skill sets who have a pragmatic attitude to the way they make decisions you end up with far better outcomes. With this, you have somebody you can talk to about things and appropriately challenge processes. The saying its lonely at the top didn’t come from nowhere.”

Villani was at his previous employer KordaMentha when it was appointed administrator of Network 10 in June 2017, when the company went into voluntary administration that led to 10’s sale to CBS.

Villani: “I got to know a number of people including Bev very well and it gave me a very good insight into some of the workings of what the business looked like at that point in time. Following the acquisition by CBS and then the merger with Viacom it is a very different business, so I have some insights, but still learning what the new company is like.”

Changes to Network 10 and ViacomCBS Australia and New Zealand

With Villani commencing the role earlier this year and the ViacomCBS team in Australia now working out of the Saunders street office, there has already been a sizeable amount of change, but Villani said that the change isn’t over.

Villani: “All businesses evolve all of the time, irrespective of the industry, will there be change? I hope so, I hope the company continues to evolve. We are going to work really hard on our BVOD strategy this year, and we have Paramount+ launching later this year.

“As to the commercial side of the business, Rod Prosser is doing a phenomenal job leading the team. They grew our commercial share by 24% linear, 38% in BVOD revenue growth and that has continued into this year, January was up 34% year-on-year, so they are really heading in the right direction.”

More to come from the ViacomCBS merger?

After previously being bought by CBS, 10 had enjoyed a new pipeline of content from the broadcasting giant, but this has increased significantly from the merger with Viacom and McGarvey said that people will continue to see the benefits.

McGarvey: “We have access to even more great content from a global parent company which is a unique position to be in. We work as part of a company now that has Showtime, Nickelodeon, and MTV along with the CBS brands that we were already familiar with. And we are relaunching a streaming service (Paramount+) this year with a phenomenal content pipeline.

While Villani’s arrival has been impactful, McGarvey said that it has not had much of an impact on content, yet.

McGarvey: “At this point, we are basically set up for the rest of the year, with Jarrod’s arrival allowing us to think more strategically and be more forward-looking. Some of the content stuff is reactionary, but there is nothing that we will change immediately but I am sure we will make some changes over the next 18-24 months.”

McGarvey: “Our strength is that blend of fantastic local content with our pipeline of international content. You really need to have both of those things and we have a unique pathway to billable content. We are also quite nimble and flexible which is important moving forward.”

Villani: “It is important we continue to maintain and strategically grow our linear footprint, which is a critical part of our business and the way we leverage our growth story into BVOD and SVOD. There is a lot of discussion around movement into BVOD and streaming services which is important, but equal to that is the growth of our free-to-air.”