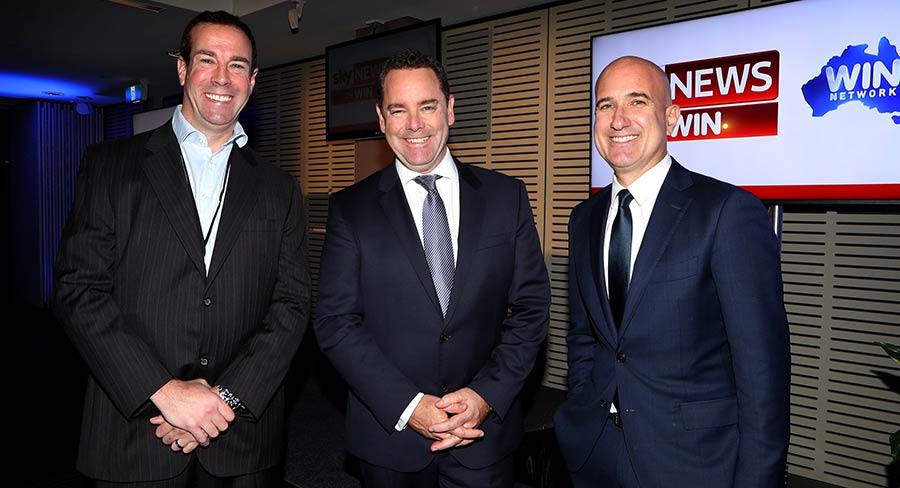 The WIN television network has been broadcasting a new dedicated 24-hour news channel supplied by Sky News from September 2. The channel is available in northern NSW on Channel 53 and on Channel 83 across all other WIN areas.

Speaking to Mediaweek at a launch event in Wollongong last week, WIN Network chief executive Andrew Lancaster said the plans had been on the drawing board for some time.

“We have been talking to Sky News CEO Angelos Frangopoulos about this for some time and the need to bring more live news, sport and weather to the network. Sky News was interested in being able to reach more Australians and to create a larger platform to enable it to tell more regional news stories.”

Lancaster said WIN had the spectrum available to run a fourth channel. When Nine was WIN’s affiliate partner it carried the 9Go!, 9Gem and 9Life channels, but when it switched to Ten Network, it had extra capacity as Ten runs two multichannels – ELEVEN and ONE.

“We had been working on plans of what we could do with that fourth channel and that was behind the start of the conversation with Angelos in the first place.”

WIN has an exclusive dedicated breakfast show that it is running across two of its channels – the WIN primary channel and the new Sky News on WIN.

“Headline News is running from 6am to 8.30am Monday to Friday and is hosted by Jaynie Seal. It’s a real news show with no gimmicks and no giveaways,” said Lancaster. WIN sells the ads on the new channel from its capital city offices for the agency groups, said Lancaster. “We also have 30 regional sales offices across Australia who are also offering the new opportunities to local clients. The uptake already has been pretty impressive.”

WIN will need to get used to new advertising partners after Ten Network’s decision to split from MCN at the end of the year and take its ad sales back in-house from January 2019 and it is part-way through building a new ad sales team under director of revenue Rod Prosser.

“Our view is we are continuing to sell the same product and we should be representing it in the same way across Australia. A new sales team [at Ten] won’t cause us any issues. We are seeing an overall increase in our network share from the Sky News on WIN brand and that is something we expect to continue.”

Lancaster said as Ten Network’s affiliate partner they continue to deal directly with Paul Anderson and his team. WIN hasn’t had any direct dealing with CBS to get a feel about their plans for Australia.

WIN has been getting the benefit of increased content spend at Ten from CBS. “What we are liking and enjoying is the strength across the 7.30pm to 9pm part of the TEN schedule. The two nights of Survivor are really doing solid numbers at the moment and then The Bachelor is going ridiculously well. It’s on in our house every week and the advertisers are really enjoying it too.”

WIN is waiting for the public announcement of its partner’s summer programming. In the meantime Lancaster was happy about the Melbourne Cup acquisition. “The horse racing is good – I would rather it start this year than next. The Melbourne Cup will be great for WIN and great for TEN. For summer it will be important we will be offering first-run programs right across the year, and not stopping in December.”

WIN copped a fair amount of negative publicity recently by moving the broadcast of its Tasmanian weekday bulletin from Hobart to head office. Lancaster explained the reasoning behind that decision:

“All of our 17 daily bulletins are now broadcast from Wollongong, but all of our news content is collected from within the various markets. Tasmania was the last of our news services where we have moved the news reading into Wollongong. That enables us to continue to deliver high-quality content telling local stories to regional Australians. That comes at a cost, so we need to operate as efficiently as possible. People might have lost sight of the fact that WIN has the only dedicated half-hour news bulletin in Tasmania and we are very proud of that.”

Watch the complete Andrew Lancaster interview with James Manning on Sky News Business here. (After a clip of the new PM speaking!)