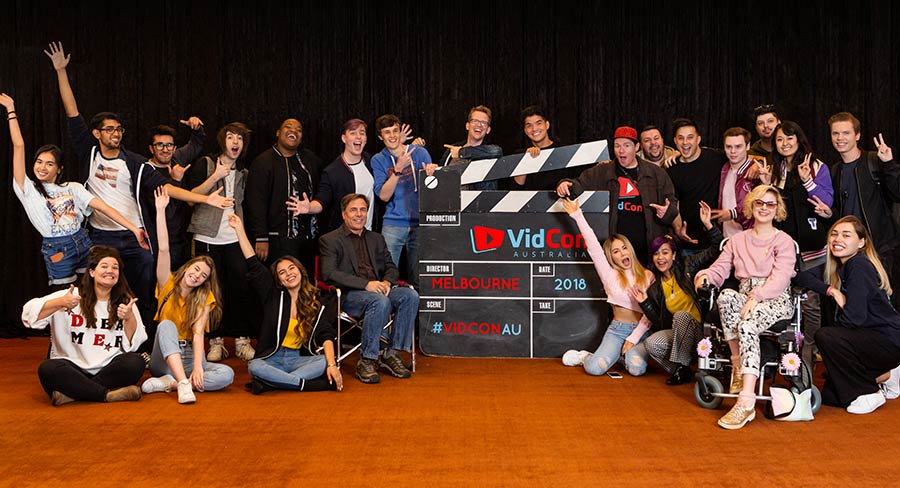 The statistics for the busy three-day VidCon 2018 event were impressive. For the second successive year the weekend conference examining online video, its stars and where it is headed, was held in Melbourne earlier this month.

• Over 115 events, sessions, lounges and fireside chats across three days
• Over 55 featured creators with hundreds of millions of subscribers and followers between them
• Over 56 speakers on the industry track including top representatives from YouTube, Instagram, Facebook, BlackMagic Design, Viacom, TRIBE and Nielsen

The organisers had gathered industry professionals from around the world together with some of the biggest names in the worlds of YouTube and Facebook video.

Helping keep a watchful eye over the event, which is now owned by Viacom, was visiting global VidCon chief Jim Louderback.

The online video pioneer has been on the journey with VidCon since the very first event in 2010, where he was a speaker. “I ran an online video company and we were a sponsor for a while,” Louderback told Mediaweek. “That is a long time in internet years and sometimes it feels like it!

“Who knew internet video would turn into something like this.”

About four years ago Louderback sold his Revision3 company to Discovery Communications, staying on initially as general manager. A little later, with time on his hands, he rang VidCon co-founder Hank Green.

“I said to him, ‘Your show is now three shows in one – industry, creator and community. Do you want some help?’ He asked if I’d come and run it for them to grow the event. For three years from 2015 I curated the industry track as editorial director, both in the US and when we launched in Europe and Australia.

“After Australia last year Hank asked me about running the whole company because he wanted to step down and focus on content and see if the event could grow bigger worldwide faster than it was.

“I started in September last year and it was sold to Viacom a couple of months later.”

Asked about the initial plans that Viacom had for the VidCon business, Louderback said: “The first thing they said was ‘We will do no harm.’ They said they love what we are and what we do and they wanted to keep us independent. We are really like Switzerland when it comes to online video as we host YouTube, Facebook, Instagram as well as LinkedIn, Twitter and everything else.

“I wanted to make sure we remained independent. Also, because Viacom is a global company it was very interested in us becoming a similar organisation with a worldwide footprint.

“We had a smaller event in Amsterdam earlier this year right about the time Viacom bought us. Next we are launching in London in 2019 in a big way. Viacom is big in London and has a lot of infrastructure there and it marks the first step of us growing with Viacom.”

There still seems to be a delineation between media coverage of what is generally referred to as old media and new media and its content creators. The latter is pulling as big as and sometimes bigger audiences than traditional TV and movie stars, yet it doesn’t attract the media coverage that content made for the established broadcasters and publishers does.

“One of the wonders and beauty of online video is that there are no gatekeepers,” said Louderback. “Everybody that has a big following in digital media started at zero. At one point in their life they went to a social platform – YouTube, Facebook, Snapchat, Twitch or Twitter – and decided to create video and build an audience. They posted their first video with no followers or no subscribers. They subsequently grew to millions of subscribers and in some cases tens of millions of subscribers, but they did it all themselves. There were no gatekeepers and nobody said to them, ‘We are going to make you a star and put you in a big show.’

“The traditional star-making machinery doesn’t exist here, which is one of the beauties of online video and what makes it so different.

“Over the last 10 years we have seen a merging of it. I used to say that online video existed in one place and television in another and that they would never meet.

“But now we are seeing that change for a number of the folks we brought to Melbourne. Liza Koshy is a major online star, but she also has her own TV series and a Nickelodeon series. “We see many of the popular online video creators doing things for Netflix or Hulu. Is it TV? Maybe, because it might be 30 or 60 minutes, but it doesn’t have a set schedule. Is it online video? Maybe because it is only distributed online.”

Louderback noted how many broadcast TV shows thrive off the back of online videos – both plundering them for content and also using the online networks for distribution. “Some of the US late-night talk-show hosts use the first segments of their shows for YouTube skits and they do really well on YouTube.”

Louderback has seen brands moving into the online space as they grasp how they can communicate with their audiences. However, he noted there was still a long way to go.

“In the US many brands are fully embracing online video creators and stars to the point where they bring them in to launch products or use them as spokespeople. They sometimes create long-term partnerships with them. In Australia there seem to be some smart brands that are doing that too.”

Louderback noted that there were several sessions at VidCon Melbourne on the industry track that featured creators telling brands how to work with them to get the most value for both parties. “Creators understand that if you do it right it can be great. If you don’t get it right it ends up being a poor experience for the brand and the creator’s audience.

“The trend in online video is that creators used to make money from pre-rolls and other things and then YouTube would write you a cheque. There are lots more ways to make money now for creators and some of them are relationships with brands via collaborations and sponsorships. Some others have their own merchandise lines and others ask for direct contributions from the audience.

“We are still in the early days of an evolving monetisation mix.”

Still to come this week from VidCon 2018:

Top Photo: Group photo at VicCon. Jim Louderback is seated toward the left.