Due to technical issues, we were unable to supply the TV Demand charts last week, and the two-week gap has provided some movement on the charts with the most noticeable change being 13 Reasons Why taking the #1 spot on all four charts.

The fourth and final season of the teen drama was released on Netflix on June 5 with the controversial series wrapping up with its final 10 episodes. The series centres on the lives of teenagers at the fictional Liberty High School with the first season detailing the 13 reasons why one of the characters killed herself.

Since the series premiere in 2017, 13 Reasons Why has been the centre of discussions due to the graphic nature of the show’s depiction of issues such as suicide and rape. After the response from mental health professionals and feedback from viewers, Netflix added a warning card before each season in 2018. Netflix also edited the suicide scene in season one in July of last year due to backlash.

A major new entry on the Digital Original charts is Space Force which features Steve Carrell‘s return to TV. Carrell co-created the show alongside Greg Daniels who was in charge of adapting the US version of The Office.
The workplace comedy focuses on the group of people tasked with establishing the sixth branch of the United States Armed Forces, the United States Space Force. Carrell plays the general in charge of Space Force and his attempts to achieve the President’s demands for “boots on the moon” by 2024. The show also features John Malkovich, Ben Schwartz, Diana Silvers and Tawny Newsome.

What We Do in the Shadows has made its way on the Overall TV charts in NZ after the series began airings its second season on April 15. The HBO series is created by Jemaine Clement and is based on the New Zeland film of the same name written and directed by Clement and Taika Waititi.  The show is set in Staten Island, and follows vampires adapting to the modern world.

One interesting note is Paw Patrol has increased its position on the Overall TV charts after becoming the topic of debate recently centring on calls for the show to be cancelled amidst the black lives matter protests and the show portraying police in a positive manner.

The highest rating and only piece of Australian content on the digital original charts is The Voice which is in the midst of a successful season on Channel Nine regularly getting over 900,000 viewers. 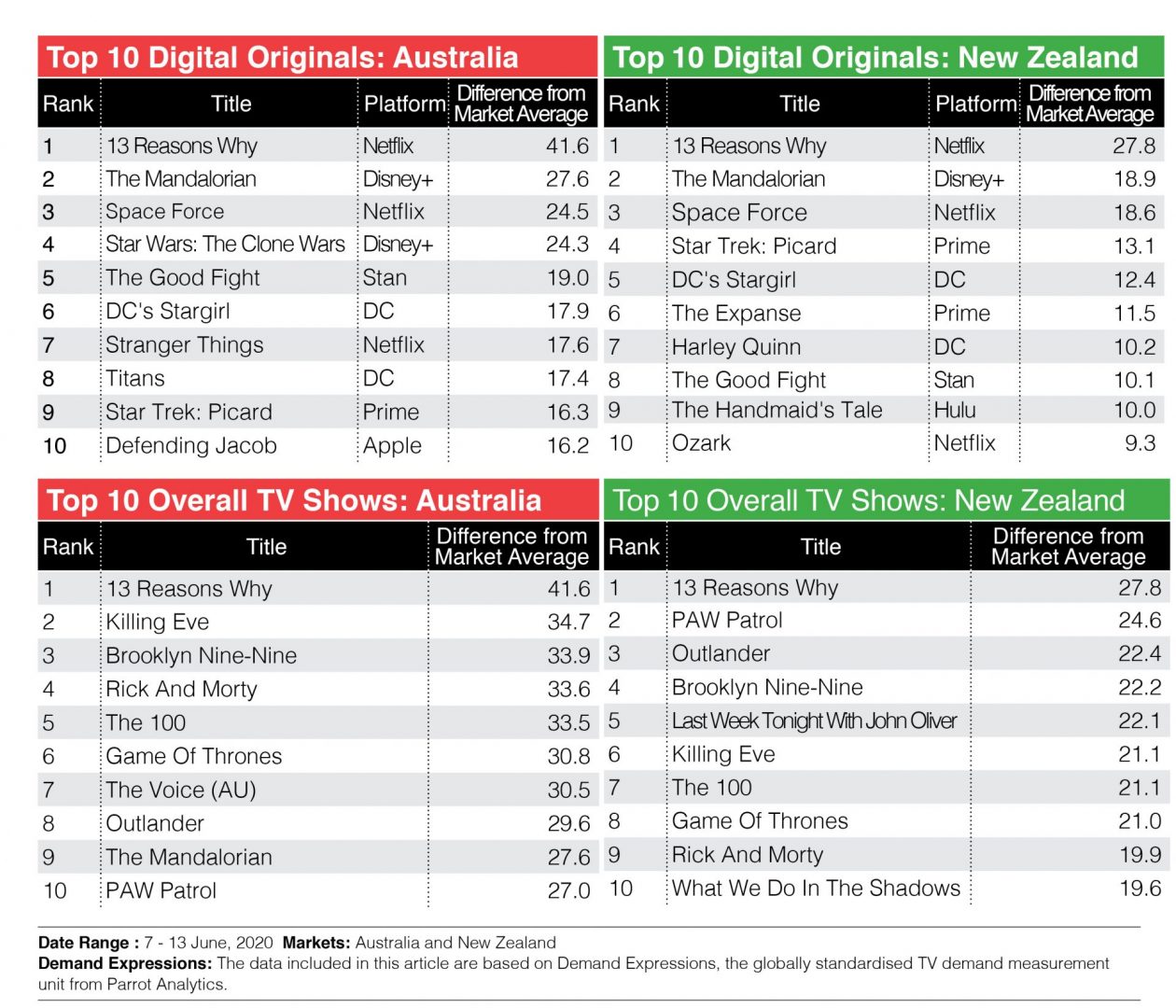