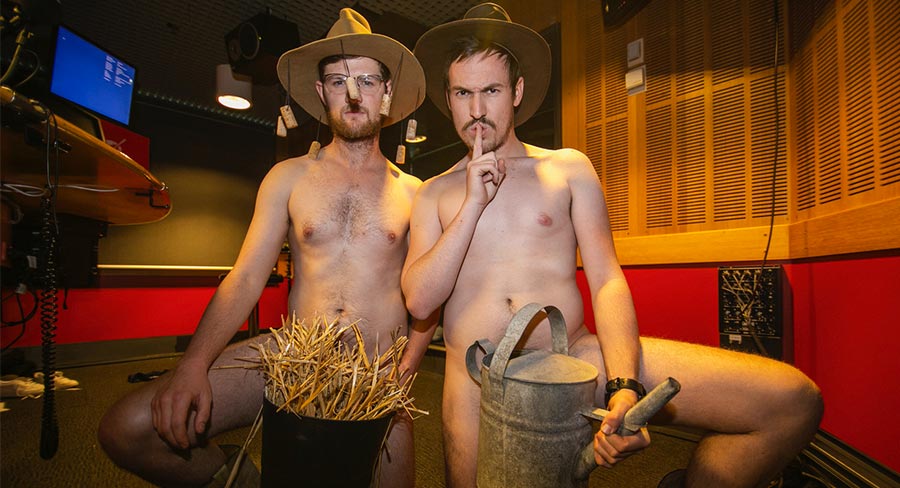 As if the ABC wasn’t already facing enough challenges – and now this!

Facebook has banned triple j breakfast hosts Ben and Liam’s post supporting The Naked Farmer Instagram page that educates people on where food and fibre actually comes from and supports people in the agricultural industry who suffer from mental health issues.

Facebook recommended the duo used content that focused on “your product or services in a less sexual way”.

Callers to the triple j breakfast show didn’t seem to have any problems with the nudity, although a few did mention the amount of body hair Ben is carrying! Liam Stapleton said: “I never thought such a big watering can could get you banned from Facebook.

“I know I’ve got a bit of a sloppy rig but I didn’t think it was that offensive.”

Ben Harvey said: “We thought we covered most of the offending bits but obviously not.”

Ben Harvey recently learnt that the suicide rate is 66% higher in rural areas than it is in the city and that farmers are more than twice as likely to take their own life than other professions. “Having grown up on a farm, I know lots of farmers who have and still are going through hard times,” he said. “It’s one of the reasons why The Naked Farmer Instagram page resonated with me and I think it is a great way to start a conversation about mental health.”

Remembering his time spent on the dairy farm, Ben said he could always tell when his boss was stressed but that the environment was such that he would shut himself off from others and internalise problems, rather than talk them through.

There’s also a very real stigma around mental illness in many smaller communities. “What I always found helpful while working on the farm,” added Ben, “was that I did it with my older brother James, so we could talk to each other when things were tough.”

The Naked Farmer’s fundraising efforts are in aid of the Royal Flying Doctor Service Mental Health Unit, who visit remote towns and properties to provide education, treatment and support.