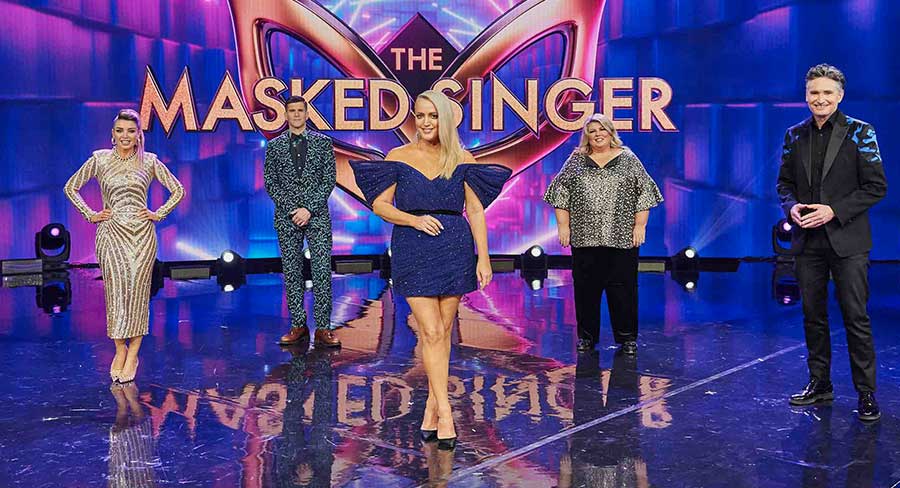 Network 10 invested a considerable amount in the format, sets, costumes and talent for the reality series The Masked Singer. So far that investment has paid dividends for the channel across two seasons. However, 10 and its production partner faced a special challenge in 2020. 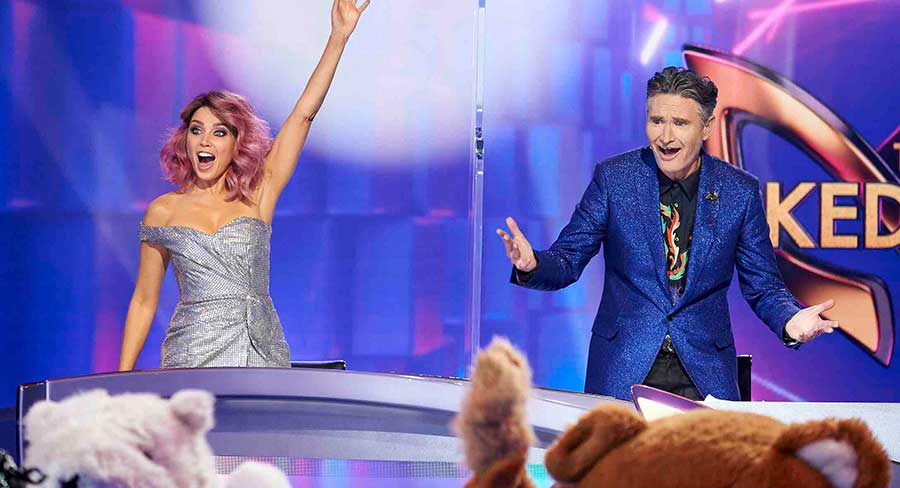 Although the production process for the finale was not what was originally planned, Tate doesn’t like it being described as “compromised”.

“What the finale became was a technical feat and it got the best out of our crews that I have ever seen. To produce a show out of two countries, two states, two studios…and a hotel room…is not something I have ever done before, nor would many of the crew have ever done anything like it before.

“I am very much looking forward to people seeing what we achieved.”

Those two countries were Australia and New Zealand, the states were NSW and Victoria, the two studios were Docklands in Melbourne where the rest of the season was shot and 10’s Pyrmont studios and the hotel room belonged to Urzila Carlson back in quarantine in Auckland after returning from Melbourne.

For the finale, panelists Dave Hughes and Dannii Minogue stayed in Melbourne along with the three remaining singers who took part in the last episode. Tate, Syney-based panelist Jackie O, host Osher Günsberg and many of the Warner Bros creative team were in 10’s Sydney studio.

“We created a virtual set by using clean images of the Melbourne set and keying them in behind Osher and Jackie in Sydney,” explained Tate. Tate had high praise for the team at Warner Bros and the production management team at 10. “They have pulled off the most extraordinary job to make this final.”

Helping keep the production focused and positive during some trying times were people from both Warners Bros and 10, said Tate, starting from the top with the CEOs of both keeping in regular touch. “People were checking on us throughout the entire production cycle. It was a lonely and confronting time going into quarantine on your own for another two weeks, especially as the finish line was in sight and we thought we were about to return to our families.”

Tate admitted he hit the wall at times during his quarantine. “There was the potential we would have to do it again too when we returned to NSW. We were all so relieved we were able to preserve the bubble and have our Melbourne quarantine period recognised.”

Not being allowed out of the room for two weeks meant Tate did a lot of pacing back and forth. “I was one of the fortunate ones as during that time I was working with Eureka Television to cast The Amazing Race and also ITV Studios on casting for I’m A Celebrity…Get Me Out of Here! I had a lot of other things to focus on which helped me through.”

Tate: “The incredible camaraderie amongst the cast and crew. We all felt so incredibly privileged to be working when so many others couldn’t. Everybody took their Covid responsibilities so seriously.”

What’s next for 10 in local production

Tate: “We are steaming ahead on the new seasons for quite a few shows and we have some incredible learnings from what we have just been through. Things we can put into practice to ensure we are not facing the same situation again.

“As an industry we have to accept this disease is going to be around for a while so we have to find ways of working with that threat. We can’t just shutdown or our industry won’t survive.”

“We will be shooting the new season this year. We are working on what will be an incredible Amazing Race that will take in nearly every state in Australia. We are still waiting for some states to let us know if we can include them. But we have workarounds to change the race if we can’t.”

Tate said to standby for an announcement about where the Race will start and how 10 and Eureka will be running it.

“I have been producing TV in Australia for close to 30 years and the team has discovered some parts of Australia I have never been to before. It is very exciting about how much of Australia we will be able to showcase. It will be a stronger series by being wholly Australian than the international version.”

Changes for I’m A Celebrity

Tate: “The fact that we won’t have a time difference that Africa gave us will mean the show will need to be prerecorded. We have some exciting and very funny creative solutions around that. ITV has come up with some brilliant ideas and I can’t wait for the audience to see them.”

Tate: “We are definitely doing Survivor next year. We are now working on how, when and where. Why wouldn’t we? [Laughs] It is one of the best shows on television.”

The Masked Singer: Behind the scenes of show’s unique finale

The Masked Singer Australia finale had one final reveal on Monday as the Bushranger was revealed to be Neighbours star Bonnie Anderson and the winner of season two of Network 10’s popular singing show.

While Anderson went home the winner, the biggest accomplishment of the night might have been that the show went to air on its original air date after a series of production hurdles. 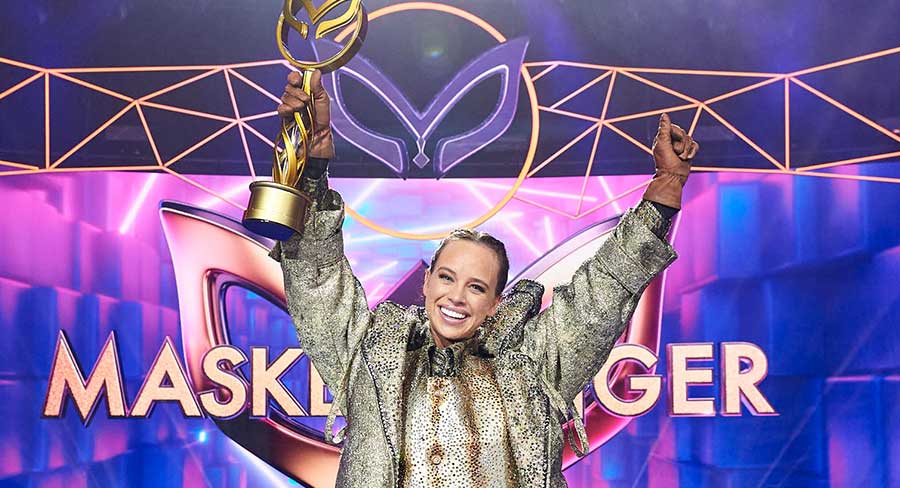 After several crew members of the show tested positive for Covid-19 hours away from the filming of the final episode, the show was put on hold and everyone, including the judges and host, went into two weeks of quarantine.

The Masked Singer Australia finale was rescheduled to record with feeds streaming in from different locations with a five-day deadline, with the show filmed across two countries, two states, two studios and a hotel room.

Those two countries were Australia and New Zealand, the states were NSW and Victoria, the two studios were Docklands in Melbourne where the rest of the season was shot and 10’s Pyrmont studios. The hotel room belonged to Urzila Carlson back in quarantine in Auckland after returning from Melbourne.

Panellists Dave Hughes and Dannii Minogue stayed in Melbourne along with the three remaining singers who took part in the last episode. Sydney-based panellist Jackie O, host Osher Günsberg and many of the Warner Bros creative team were in 10’s Sydney studio.

The post-production facility used for the show was City Post which has been the post house for shows like The Dr Blake Mysteries, My Life is Murder and BAFTA-winning/ Emmy-nominated The Cry.

Mediaweek spoke with Nadia Diggins, City Post’s operations manager, about what it was like being a key cog in the production of the show with so many moving parts during the pandemic. “We were literally about to record the finale – eight hours later and it would have been recorded. We had to close everything down and everyone went into quarantine for 14 days, but they still wanted to keep the original transmission date. So we recorded the finale on the Tuesday with Osher having a feed in Studio 10 in Sydney with Jackie O, and Urzila was in her hotel.

“They pulled the key through the desk so Osher appeared as a hologram of sorts, and we had to put him in there which required replacing some of the shots because the link would break up and he would freeze. Through all of his shots we used reflection maps and that sort of thing to sit him in the environment with Jackie O. Urzila recorded her feed on her laptop so hers was a bit more limited.”

“We came in on the Wednesday and it was picture locked on the Saturday morning, graded, and then mixed, and we ended up delivering on the day of transmission on the Monday. It proves you can pivot in this environment.” Diggins said that she had experienced tight turn arounds before but this pandemic-induced challenge presented its own unique situation.

“I have worked on a lot of live television and tight turn around formats like The Voice but nothing quite like this with the geographical distance of key members of the show in remote locations.”

“It would have been nice to have more time to turn things around and go back to the original green screen for a lot more of the shots. But we had a fantastic team whereby everyone was happy to roll up their sleeves.” 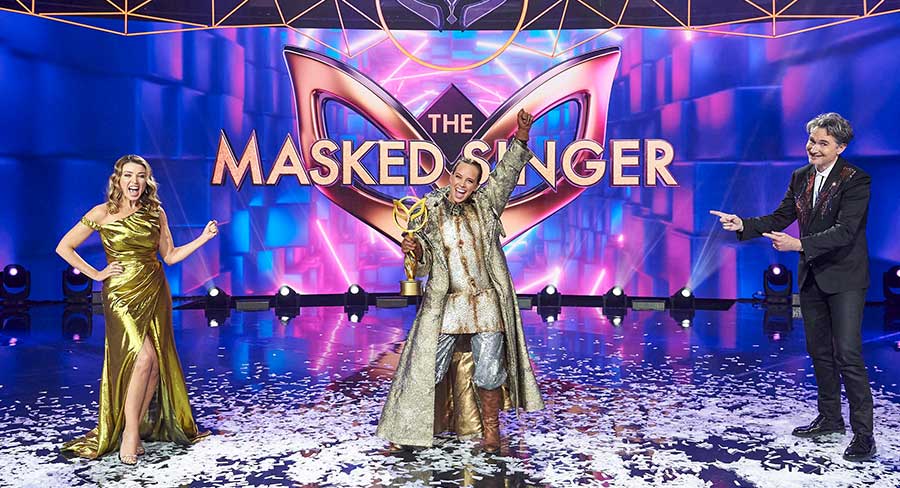 The silver lining according to Diggins is that the process has opened up the possibility of new ways of approaching projects like The Masked Singer Australia in the future.

“I think there have been reservations in the past to have remote setups because people feel being a creative industry we need to be in the same environment to effectively collaborate. For a long time, Sydney has really been a bubble where all the work has been focused which meant you had to relocate to Sydney. But it is nice to see the technology is there and it can be just as creative in another state or another country.” 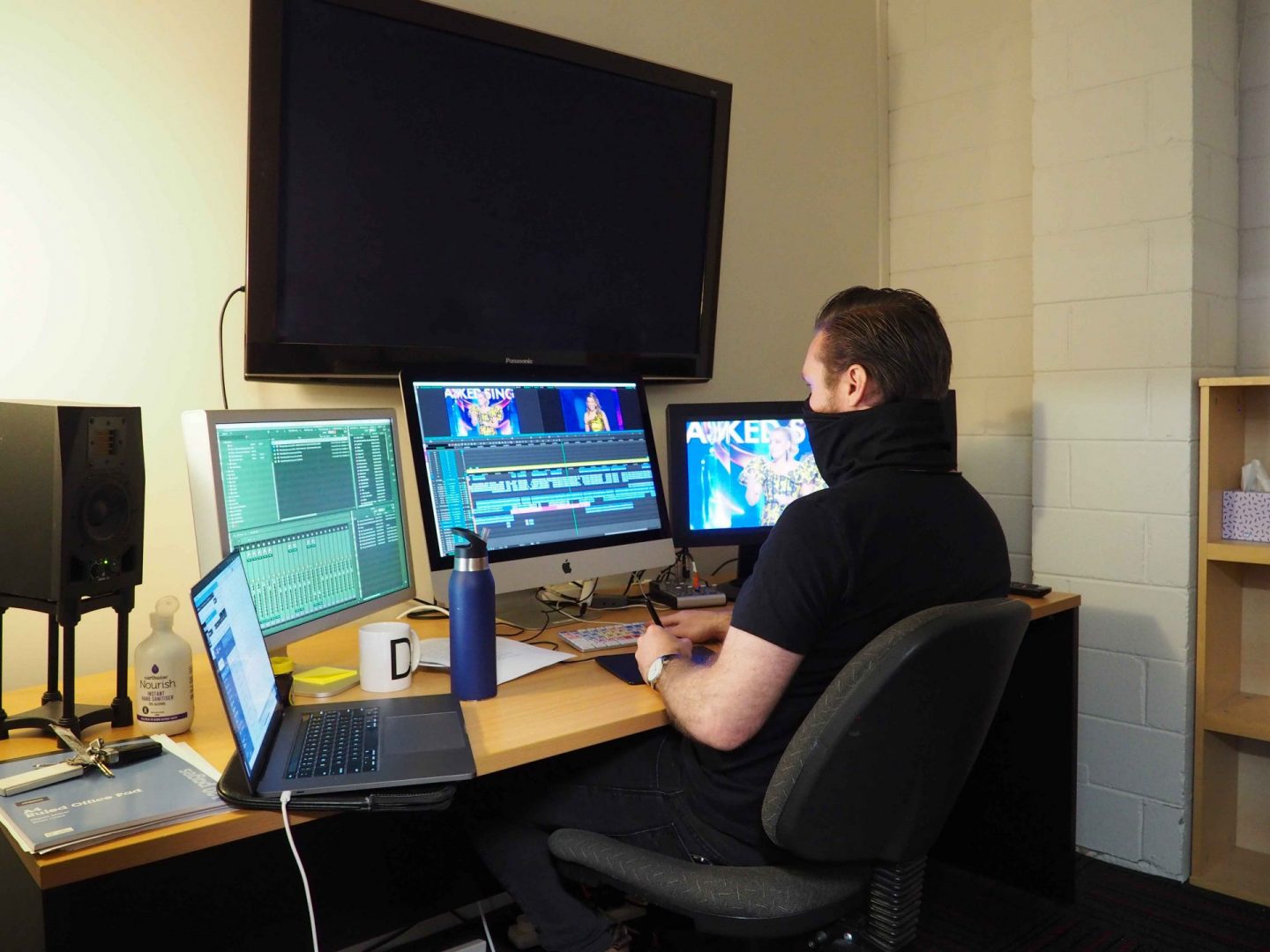 Network 10 executive producer and head of entertainment Stephen Tate told Mediaweek: “What the finale became was a technical feat and it got the best out of our crews that I have ever seen. To produce a show out of two countries, two states, two studios…and a hotel room…is not something I have ever done before, nor would many of the crew have ever done before.