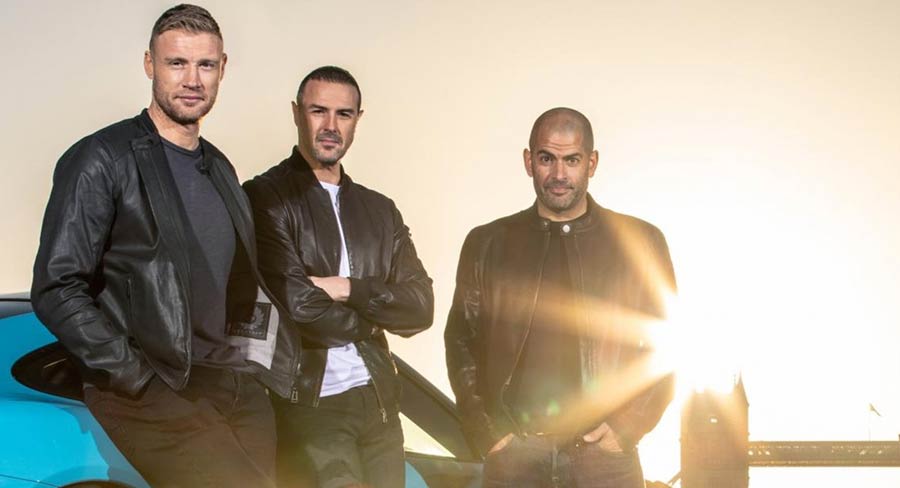 Following Matt LeBlanc’s announcement that he will leave the BBC motoring program after the next series, Top Gear has announced a new-look lineup of hosts who are promising to cause comedic car chaos and take the world’s biggest motoring entertainment show to another level.

Lancashire lads Paddy McGuinness, the UK primetime entertainment host and comedian, and former Ashes-winning England cricketer and TV presenter Freddie Flintoff will join motoring journalist and racing-driver Chris Harris in what the BBC is calling one of television’s most explosive combinations of entertainment firepower and petrolhead fumes. And the all-British team were officially unveiled at a photocall on the banks of the River Thames in central London, flanked by a red Aston Martin DSB Superleggera and a blue Porsche 911 GT2RS.

Flintoff’s busy media career includes time spent in Sydney as part of Nine’s series Australian Ninja Warrior. A Nine spokesperson told Mediaweek that Flintoff will be remaining with Ninja Warrior. The show will be filming its 2019 series soon from a new location in bayside Melbourne.

The new Top Gear trio will begin production on Series 27 of the BBC Two show in early 2019 – with their inaugural series premiering later in the year.

Rory Reid, who has co-presented Top Gear since series 23, will step down from the main presenting lineup but will remain part of the Top Gear family, along with Sabine Schmitz. He will continue to be the face of Top Gear’s companion Extra Gear and will be at the heart of what will become a bigger digital presence for the show.

Paddy McGuinness commented: “Getting the Top Gear gig is a real honour and I’m thrilled the BBC has given me this opportunity. To be hosting a show I’ve watched and loved from being a small boy is beyond exciting. Top Gear fans worldwide are a passionate bunch and I consider myself one of them. Now let’s start up this great British machine and see what it can do!”

Freddie Flintoff added: “It’s not often you have the chance to do both of your dream jobs, but I’m now lucky enough to say I will have. I’ve always been passionate about cars and I’m so excited to be joining the Top Gear team.”

Chris Harris says: “I think you can tell just how much fun we’re going to have making Top Gear with Paddy and Freddie. They’re both brilliant, natural entertainers – and their mischief mixed with the most exciting cars on the planet is sure to take the show to the next level. My dream job just got even better.”

The next series of Top Gear, LeBlanc’s last as lead host, will screen early in 2019 on BBC Knowledge in Australia, before the new hosts’ premiere series 27 later in the year.