• The rest of the top 10 is an interesting mix.

This week, Cricket 19: Official Game of the Ashes has come in at the top of the retail charts. It’s not at all surprising given Australia’s natural affiliation with the sport, not to mention the fact that the World Cup is on right now, but it’s no doubt heartening for its Australian developer, Big Ant, who has been honing its premiere cricket offering for years at this point. (With a small detour via last year’s light-on-features Big Bash Boom.) Cricket 19 is another earnest simulation of the sport, and it’s the best cricket game yet, albeit with a few rough edges.

The rest of the top 10 is an interesting mix. Mortal Kombat 11 continues to sell well, holding its number two spot, while Days Gone, the high profile but critically poorly received PS4 exclusive, continues to sell, coming in at number three. The recently released Team Sonic Racing has dropped a few spots but remains in the running, as does Rage 2, but the rest of the charts are made up of much older titles: Black Ops 4, Grand Theft Auto V, Mario Kart 8, FIFA 19.

What will the rest of the year look like? We’re going to know a lot more once E3, the biggest event on the gaming calendar is over. It’s happening this week and you can follow it all here. 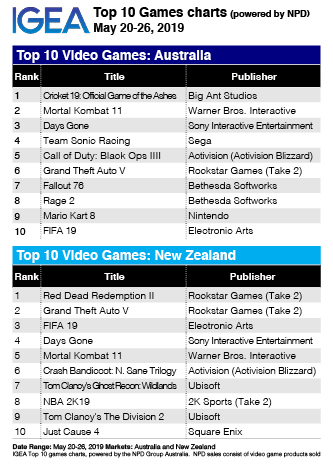