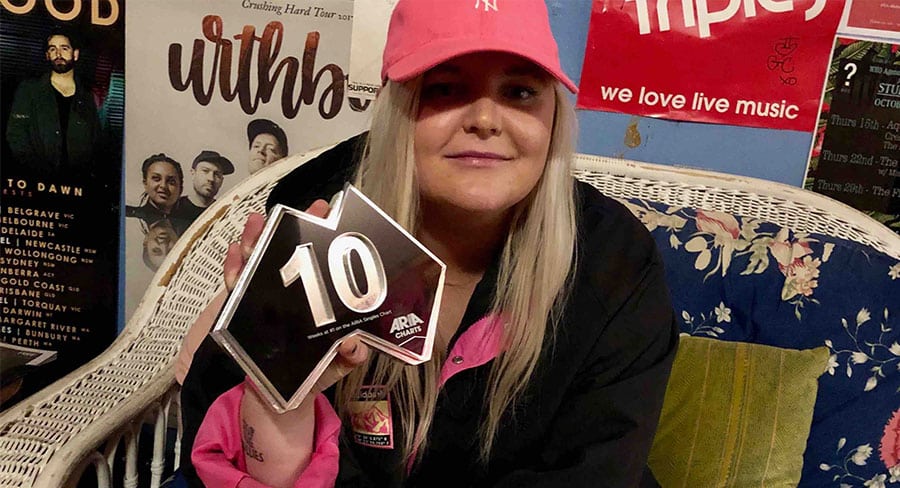 Tones And I has broken the record for most weeks at #1 on the ARIA Singles Chart by an Australian artist as she takes out her tenth consecutive week in the top spot with Dance Monkey.

The second single by the singer-songwriter has now broken the record previously held by Sydney group Justice Crew, who spent nine weeks at #1 in 2014 with Que Sera. The 3x platinum single is also the only Australian #1 on the ARIA Singles Chart for 2019 so far. During her reign at #1, she also surpassed the 32-year ARIA Charts record for most weeks at #1 by an Australian female solo artist, held by Kylie Minogue’s Locomotion since 1987, at seven weeks. The current record for most weeks at #1 on the ARIA Singles Chart is Ed Sheeran’s Shape Of You (2017) for 15 non-consecutive weeks.

Tones And I also appears on the ARIA Charts this week with the singles Johnny Run Away (#36, 2x platinum) and Never Seen The Rain (#23, platinum). She also appeared on the Albums Chart with her debut EP The Kids Are Coming (#3), released on Bad Batch Records via Sony Music Entertainment Australia.

Tones And I has gone from busking in Byron Bay to topping the charts globally in a matter of months, with Dance Monkey amassing over 250 million streams globally to date, with 175 million of those this month alone.

The weekend also saw Dance Monkey hit #1 on the UK Singles Chart, with the song jumping 6 places to claim the top spot in the UK with over 5.1million streams and 50,000 chart sales this week. She is the first Australian to top the UK charts since Iggy Azalea’s Problem with Ariana Grande in 2014. Dance Monkey also remains at number #1 on the Irish Singles Chart for a sixth week, where it is now the longest reigning #1 by an Australian artist this millennium. Dance Monkey has now hit the #1 position in 13 countries and is accredited Platinum in Ireland and New Zealand, plus Gold in both Denmark and Sweden.

Tones And I said:

“I am so thankful to Australia for all the support, this song was written for my friends at the Byron Bay backpackers, little did I know the whole country would be dancing to it, wow!”

“I am so very proud of Tones and her incredible honour and achievement of becoming the longest running Australian artist at #1 on the ARIA singles chart, holding the top spot for 10 consecutive weeks. This is a true testament to her unique creative brilliance as an artist, her hard work and dedication, as well as her unwavering appreciation of her fans. Tones is a very special artist who has captured the world’s attention, and we look forward to continue working with her and her amazing music. Tones is the real deal.”

“Congratulations to Tones And I for her record-breaking chart performance. It is an incredible feat for any artist, let alone one who was busking on the streets a year earlier, and has just released her debut EP. Her success here and abroad is rewriting the rules of what an Australian artist can achieve, and I look forward to seeing her break more records in the coming weeks and years.”

Tones And I is half way through her sold-out Australian headline tour, which concludes in her hometown of Byron Bay on October 11 and has seen her performing at sold out venues around the country. Next month Tones And I will head overseas for her first ever European headline tour which is also completely sold-out. The dates include shows in Berlin, Cologne, Rotterdam, Amsterdam, and London. Following the European run, Tones And I will make her highly anticipated US debut with sold-out performances at New York City’s Mercury Lounge and Los Angeles’ El Cid. Tones And I has also been announced as playing at Laneway Festival 2020 and has announced a world tour from the end of February 2020. For all tickets and more information, visit www.tonesandi.com/tour-dates.