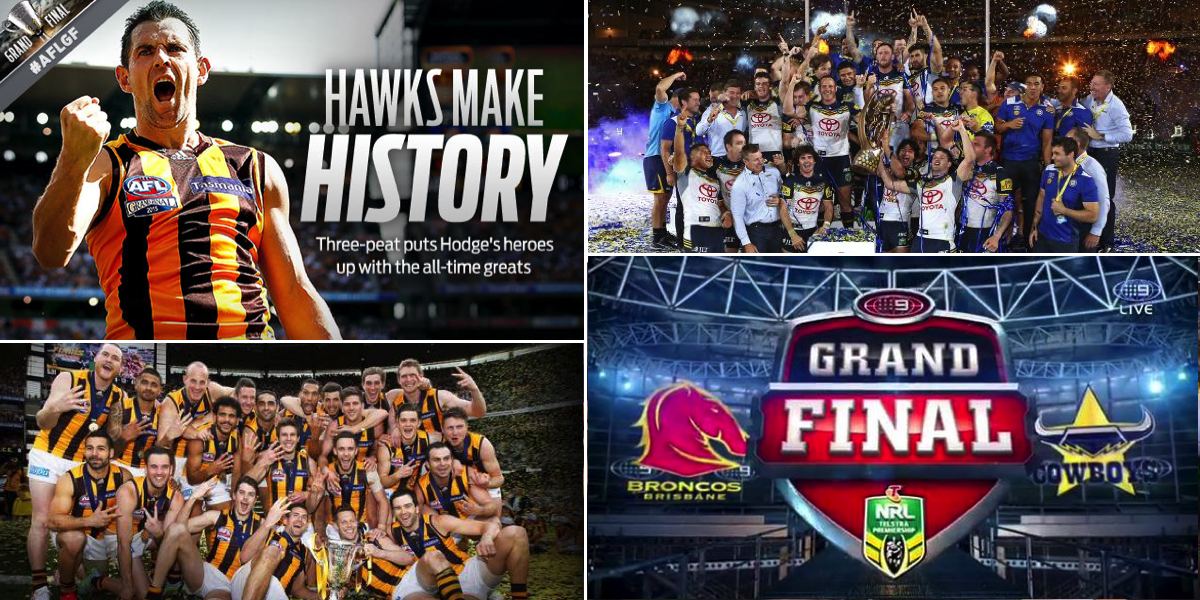 The AFL match between Hawthorn and West Coast turned out to be a one-sided event with Hawthorn in control from partway through the first quarter. Seven screened the match on its primary channel Seven with a HD simulcast on 7mate. The audience of 2.63m was the biggest metro TV audience of the year, outperforming the second State of Origin rugby league match which had a metro audience of 2.61m. The audience fell short of the 2014 Grand Final though which had 2.81m watching.

The NRL match was an edge-of-the-seat thriller which went into extra time with Townsville kicking a golden point to win against Brisbane. The match was broadcast on Nine and in HD on GEM with 2.43m metro which was below only the first State of Origin match. The audience was also down on the 2014 NRL Grand Final which did 2.59m.

The AFL didn’t have a direct impact on Seven’s Saturday primetime share because it was an afternoon match. However many of the audience flowed through into its Saturday night although the long post-game coverage carried into the night on various Seven channels in different markets. The start of six weeks of Star Wars movies ensured a Seven Saturday primetime victory though.

The North Queensland Cowboys made history yesterday when they won their first NRL Premiership defeating the Brisbane Broncos in a nail biting, Grand Final Golden Point thriller (17-16) – in what has been deemed by many as the greatest NRL Grand Final of all time.

A crowd of 82,758 attended ANZ Stadium yesterday, making the 2015 NRL Finals series the most attended series on record.

The Nine Network recorded a massive free-to-air audience share of 45.1% with Total People.

In Sydney, the game was the number one program for the night with the broadcast achieving an average audience of 952,000, with a peak of 1.084 million viewers.

In Brisbane, the game was also the number one program for the night securing an average audience of 788,000, with a peak of 939,000 viewers – making it the highest rating NRL Grand Final since 2006.

In Adelaide, the game was the number four program of the evening with an average audience was 112,000, while the peak audience was 148,000.

The post-match Grand Final Presentation, was the number two program of the night with a 5 City average audience of 1.77 million, peaking with 2.748 million viewers.

The pre-match Grand Final Entertainment,  was the number three program on Sunday, with a 5 City average audience of 1.430 million, peaking with 2.057 million viewers.

With a total of 85,448 tweets, #NRLGF dominated Twitter traffic last night, peaking at a massive 2,001 tweets per minute at fulltime at 9.35pm.