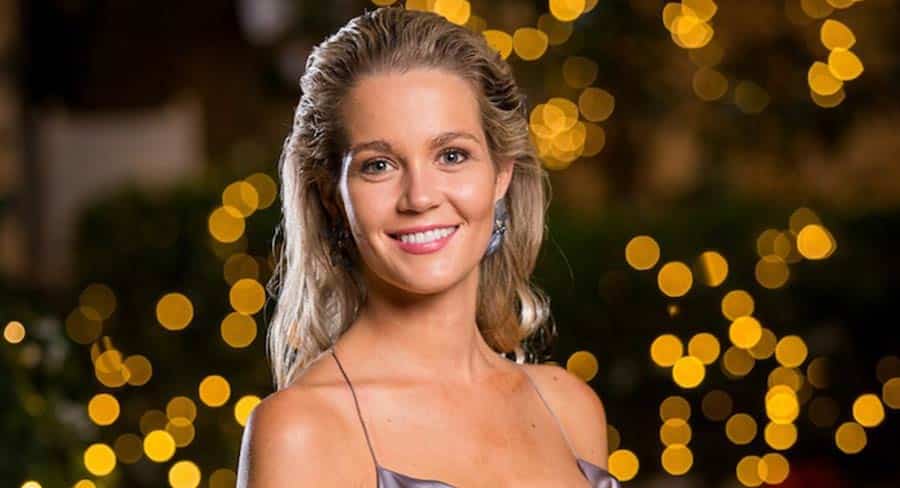 With the finale looming, Matt had an opportunity to strengthen his feelings as he spent alone time with the final three bachelorettes Abbie, Chelsie and Helena on the penultimate episode of The Bachelor Australia.

Arriving in a classic white Porsche, Matt picked up Chelsie and set off on a nerdy themed date. Knowing Chelsie had a love of codes and math, Matt kept her on her toes by throwing numbers to her throughout the day, to remember to help solve a code that needed to be broken.

Settling in for some wine and cheese, Matt revealed a safe. Chelsie then had to work out maths equations comprised of information from their first three dates to decipher the code. Tying in everything they both love, Chelsie cracked the clues and opened the safe which held a necklace engraved with the chemical formula of oxytocin.

Declaring that she could see a future with Matt, Chelsie said: “I really hope it is us at the end.” Scared that Matt couldn’t reciprocate her feelings, Chelsie then laid her biggest card on the line and revealed that she was falling in love with him.

It was then Abbie’s turn to be wooed. Standing by the water, Abbie waited for Matt as he arrived via boat. Admitting he enjoyed their “frolicking” in the water at hometowns, they were to spend the day in “nature’s pool”.

Finally coming up for air, Matt presented the next part of the date – a cruise on a super yacht. Settling in for the usual bubbles and platter, this time with a view of Sydney Harbour, Abbie told Matt how happy he made her, before saying those three special words: “I love you.”

With more questions than answers, Matt picked Helena up in a Jaguar. Still struggling after what happened at Helena’s hometown visit, Matt was keen to move past everything and get things back on course.

Knowing Helena’s passion for travel, Matt planned on showing her the world without leaving the country. Taking off in a fancy car, they took in a view of the countryside, finally arriving at a retreat representing Argentina.

After exchanging French pleasantries on the red carpet on night one, Matt took it upon himself to teach her a bit of Spanish.

The elephant in the room however needed to be addressed and Matt asked Helena point blank what happened at hometowns. Admitting she had tested him to see if she was worth fighting for, Matt became annoyed, declaring this wasn’t the healthiest way to go about things.

Confused, Matt admitted Helena had really thrown him and didn’t leave him full of confidence about the feelings between them.

Torn between two women who had told him exactly how they felt and one who couldn’t, Matt decided to send Helena home without a rose.