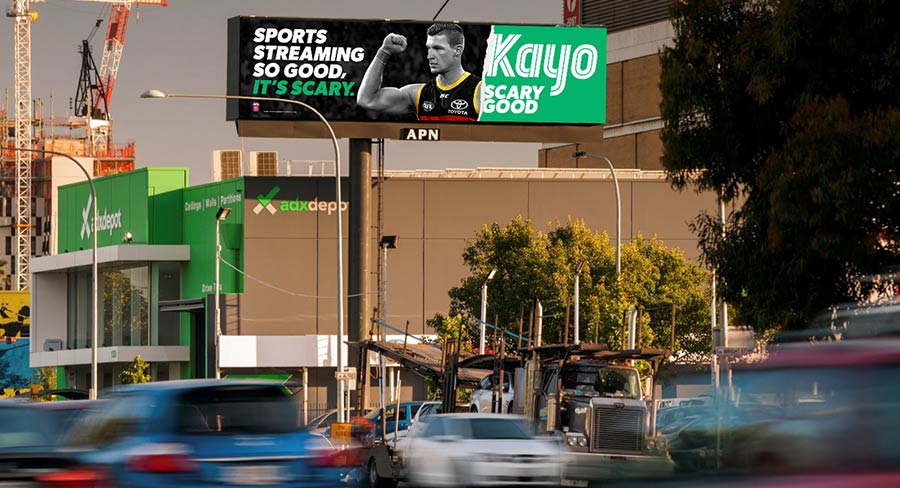 After a launch campaign in November that helped lift subscriptions over 100,000, Kayo Sports is set to unveil the next iteration of its brand marketing campaign and it is ‘Scary Good’.

Kayo has released these details about the new campaign: “The winter codes campaign launches the next evolution of the brand and Kayo’s attitude is brought to life with the ‘Scary Good’ platform, which exists not only in the new look and feel but as a symbol of Kayo’s internal and product ethos.

“The ‘tear’ creative represents tearing up the rulebook to reveal a sports streaming service that’s so good, it’s scary. Whether that be over 50 sports in one place, no lock in contracts or the ability to stream what you want, where you want, at any time. This is reinforced by the many game-changing features that put the consumer in control, all at the scary good price of just $25 per month.

“Now that Kayo has established a brand foundation, we’re excited to introduce more of our own attitude and really showcase what sets Kayo apart.”

Kayo partnered with Host/Havas, Havas Media and Wellcom Worldwide on the ‘Scary Good’ campaign, which is in market today with over 2,800 OOH executions, 51 radio stations across metro and regional radio, weekly press executions and digital activity reaching millions of sports fans every day.

Meanwhile News Corp Australia has collaborated with Kayo Sports for the first time to launch a bundled news and sports streaming subscription. The offer will be supported with a four-week integrated marketing campaign. The bundled subscription offer is for a 12-month digital subscription of News Corp Australia’s metro and regional newspapers and a Kayo Sports subscription, at $30 per month for the first 12 months. Minimum cost is $360 and conditions apply.

Kayo is available on iOS and Android devices, laptop, PC and on TV with Telstra TV, Apple TV and Chromecast Ultra.

Kay is offering a 14-day free trial at www.kayosports.com.au.