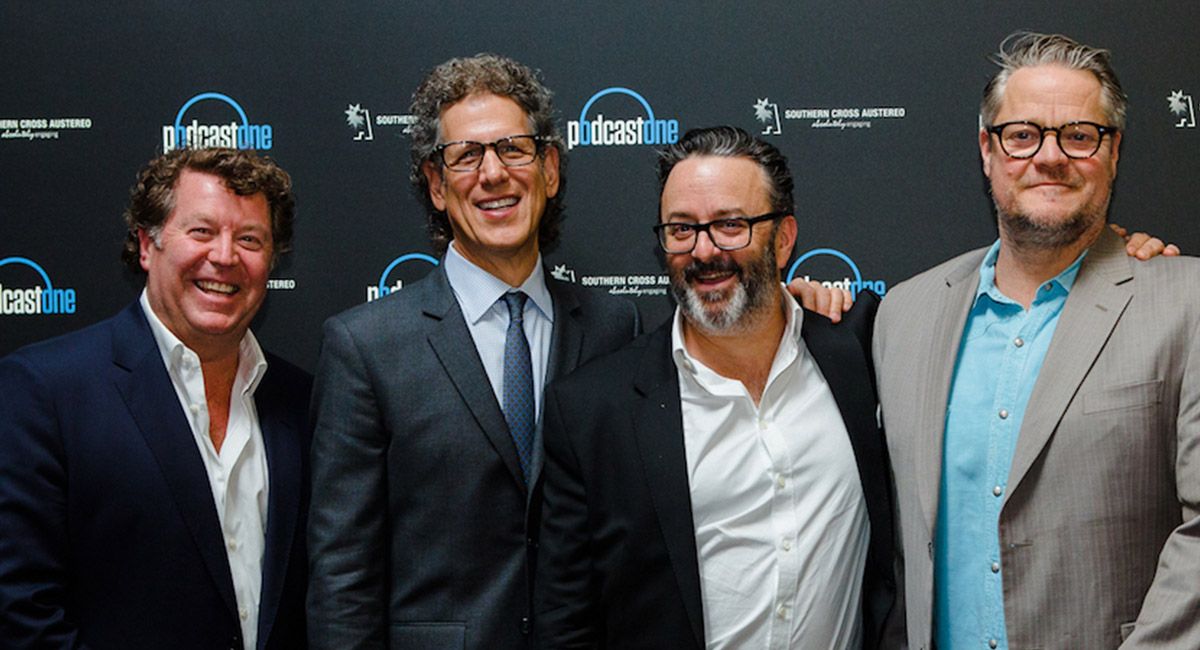 They both updated the market and launched new initiatives in the past month.

Now ARN has entered the fray tapping the resources of Spreaker and Whooshkaa. As a consequence ARN’s iHeartRadio now has more than 500,000 podcast episodes and claims to be the largest podcast provider in Australia.

As Southern Cross Austereo officially launched its already operating PodcastOne Australia platform earlier this month, Mediaweek caught up with the CEO of the US business, Jim Berk.

“We are the largest podcast network in the US. We will have about 1.7b downloads in 12 months and we have about 500 hours of original programming a week across 200 shows,” said Berk at the Sydney PodcastOne launch event.

“If you are talking about technology, distribution, sales and marketing we are the premier player in the US.

“When Southern Cross Austereo approached us about these territories and to create a parallel project we actually did an investigation to see if they were the right partner. We wanted somebody who had a long-term commitment versus just using our platform for repurposing. In doing this partnership we had to cordon off our programming from this territory.

“In the past, US PodcastOne content would have been available in this country. Now we have geoblocked this territory so the programming will be exclusive to the Australian operation.

“PodcastOne Australia has access to all of our programming and it can select any of our shows and import them to the new platform.”

PodcastOne was formed in the US in 2012 and the inaugural podcast included Adam Carolla, who is the largest podcaster of all time. His show was the basis of PodcastOne.

Corolla has “skin in the game” as one of the founders of the US business.

Berk: “Adam had left radio when PodcastOne started and he is a full-time podcast network. He does 15 hours a week across six different shows with an audience upwards of 3m a week across those different podcasts.

“He is the most successful podcaster of all time both in earnings and audience size and it’s in the Guinness Book of World Records.”

Berk said he is working with SCA on bringing Carolla to Australia to record some shows some time in the next six months.

The US platform is also taking some of the Australian content to the US and will publish Adam Shand’s Trials Of A Vampire in the US later in 2017. “Original content is what matters much more than anything else.”

The US audience will also get to hear any of the new original Australian podcasts that start to build significant audiences. “With our PodcastOne dashboard, which is also available in Australia, we know when people listen, what device, what time, where they are listening and whether they stream or download.”

After a decade in the TV and film business before taking over PodcastOne, Berk said he has a good feel for what will and won’t work, but you can never be too sure. “Even the second coming of Christ could be a 50/50 proposition in our business. It is really hard to pick.

“When predicting performance we are always looking for the key indicators. It has to be compelling content and have some sort of social media profile. People want to follow someone they have an existing relationship with.”

Berk likes the sound of what he has been hearing in Australia so far. “What is interesting about the original content at PodcastOne Australia is podcasters who have a burning need to talk to a live audience. The best podcasters make you feel like you are sitting in the room with them.”