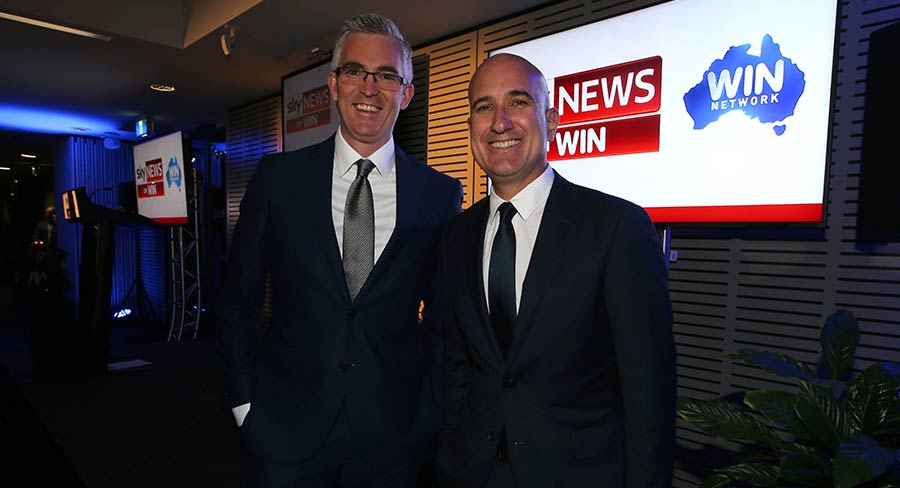 For the past 20+ years Angelos Frangopoulos and his Sky News Australia team have been reporting on bombshells. However, in the past few weeks there has been some exploding internally. As he packs his bags for a new job in the Middle East – as CEO and managing editor of Sky News Arabia in Abu Dhabi – Frangopoulos discusses the recent WIN TV FTA deal plus recent criticisms about conservative bias.

• Sky After Dark and Malcolm Turnbull

I probably owe Chris Uhlmann a beer for giving us such great exposure on the Today show.

The ratings indicate our programming throughout the day and particularly in the evening does resonate with Australian audiences.

Some of our timeslots have seen the audience increase by over 100% year-on-year.

In my final years of running this business we have achieved our highest ratings ever in the history of Sky News. Surely that indicates we are doing something right with the programming we are delivering.

• Has News Corp ever had editorial input since it became a 100% shareholder?

That is the most ridiculous thing that I have heard. Our current programming was in place before News Corp acquired the business. Paul Murray has been with us for 10 years. He did not suddenly start expressing opinion on December 1, 2016 when News Corporation acquired the business. The programming was approved by our previous shareholders – Seven, Nine and Sky News UK.

• WIN TV deal: Would you have liked to have had Sky News on metro FTA too?

The deal works even better because it is just regional. There is something special about delivering Australian content like this to parts of the community that really haven’t necessarily always had the opportunity to have a national voice.

We are really committed in getting programs like those hosted by Paul Murray and David Speers on the road and into regional communities. When we say regional we are including Canberra and all of Tasmania because it is part of the WIN distribution area.

It is very exciting that going into an election campaign we will be able to engage regional audiences to make them feel a part of it for those people who don’t have Foxtel.

The other thing that is quite critical about what we are doing is that this is a proper promotional platform for Foxtel into regional areas. You will still be only able to get the full suite of Sky News programs on Foxtel. You might have seen from the program schedule we are being very selective. In the case of Paul Murray for example, viewers of Sky News on WIN get the first hour, but not the second hour. We expect this to help raise the profile of Foxtel and give people an understanding on the depth and breadth of the Australian content that subscription television offers.

• Headline News breakfast with Jaynie Seal only on WIN TV

We are doing a separate breakfast show for regional Australia for a couple of reasons. One is that WIN wanted to put a FTA breakfast show on the main primary channel because the Ten Network doesn’t have one. We were faced with a challenge because we have an output deal with Seven and Nine but we can’t air Seven and Nine content on FTA television because that falls outside the rights envelope we have with them.

We have created a separate product at breakfast time that meets our requirements and quite frankly is unashamedly regional. We cover regional newspapers and report regional news from 6am to 8.30am.

We don’t talk about the commercial deal we have with WIN but there is a commercial relationship. It is responsible for selling the WIN Television Network that carried the Sky News on WIN signal.

At the same time of launching Sky News on WIN we transitioned all our playout to MediaHub at Ingleburn in the southern suburbs of Sydney. [MediaHub is part-owned by WIN Corporation.]

That allows us to have separate advertising feeds. MCN is a national advertising provider for a national signal, and WIN is able to do state-by-state broadcast feeds.

• What’s next for the Sky News Australia chief executive?

I have been working at the channel for 22 years and you can add two years I spent working at Sky News in the UK. I am going to another Sky News so in a way I am not leaving.

Although I have been in the business for a long time, I feel like I have had 22 different jobs. Each year has presented a different challenge. I feel this is the right time to move on to another challenge. It is a great adventure not just for me, but also for my wife Rebecca and our five kids, going to live in the Middle East.

For me professionally, working at a media business that broadcasts in Arabic has its challenges. I am fortunate to have a couple of languages, but they are absolutely of no value when it comes to Arabic!

Sky News has been a very successful business. It is successful because it has diversified its revenues into other commercial opportunities. It is, however, a business that has been fundamentally funded by Foxtel via subscriber fees. That is a real achievement for Foxtel and the various CEOs over the years. Each of them has respected the need for Australian content and particularly the channel’s focus on Australian politics. We have developed a unique positioning in the media landscape in that we are not chasing fire engines. We are doing national affairs and opinion. This is programming you can’t get anywhere else on Australian television.

• How does the rebadged Sky News Business (soon to be Your Money) end up with a national FTA single, while Sky News will be regional only?

It is a commercial reality. When Hugh Marks and I first talked about the idea of working together, it really made commercial sense right from the very start. Nine had spectrum and we had a channel. The Sky News Business channel, much more so than the main Sky News channel, will benefit greatly from the greater reach and being more consumer focused. I have every confidence in the JV CEO Kylie Merritt and I expect Your Money to be a great success.

It is a great reflection on the maturity of the Australian media industry that we can have products launching with different major media groups.

Disclaimer: Mediaweek’s James Manning is a contributor to Your Money