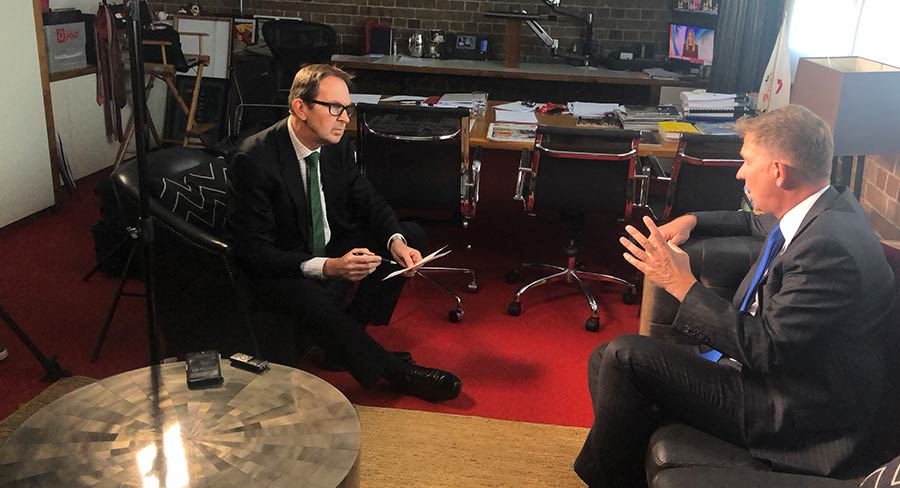 Seven West Media CEO Tim Worner was interviewed for Mediaweek on Sky News Business yesterday. The interview will be played again on Thursday at 2.30pm AEST.

You started talking on the earnings call about a focus on ratings, revenue and costs. If you were judged like contestants are on reality TV, is two out of three too harsh a score?

You could probably give us three out of three.

Let’s run through them – our ratings performance in the first half of this year has been history making. No one has ever achieved a 41.6% share to the halfway point. You would have to give us a tick there.

Revenue was soft in the first half and we committed to doing something about it and we have done it. In the second half we were pretty close to a 40% share – 39.91% – and we are forecasting we will be back to full strength in terms of revenue share.

Cost – we talked about some pretty muscly targets in February and we have over-delivered on them. We have renewed cost targets and we are focused on hitting them too. The record ratings don’t seem to have brought in extra revenue.

We are forecasting the overall TV market can grow this financial year and there are a number of factors that underpin that. We are seeing a swing back to FTA television and away from some of the more spuriously measured media. We are seeing big brand builders, who need to rehabilitate their brand, come back to television with strong campaigns. It will also be an election year.

Could the merger of Nine and Fairfax have ramifications for the flow of revenue in your sector?

That will be their aim. Our aim is to prevent that and make sure our offering is even more compelling.

There is an enormous amount of work to do to put those two organisations together. That will create opportunities for others, including Seven West Media, and we will make the most of those opportunities.

We have looked at a range of possibilities right across the media landscape. And we are still doing that now. In terms of Fairfax, it was one we decided not to pursue. There are other potential commercial tie-ups in the absence of a corporate transaction that can make a lot of sense for us.

Has there been some underperformance from the shows so far launched in the Q2 2018 TV year?

What is the threshold of success these days? We have hardly launched any of our back half yet and there is a lot more to come. One thing I can guarantee is very strong year-on-year growth and I don’t think the others can say that.

No, we won’t be doing a Seven Pilot Week… you can leave me out of that. It is not just about new shows. Part of our ethos at Seven is that the real heroes in television are those that can keep a show fresh day-in, day-out, year-in, year-out.

Look at our performance in Seven News on the east coast, look at Sunrise. That is strength we are having in the second half that wasn’t there in the back half of last year.

How are the multichannels performing?

7mate is the little channel that could and is punching well above its weight. It is the best channel in the world ever because of its return on investment considering the amount we spend on programming that channel and what we are able to get from it is extraordinary.

Are you writing revenue already from cricket partnerships?

We are not about to do cartwheels in the car park or declare victory at half time, but there is a lot of interest.

There is interest from advertisers who were previously not interested in cricket, which we didn’t expect. The usual suspects are there as well.

Are you claiming leadership in BVOD with 7plus revenue share?

We have 42% of revenue for the first half of calendar 2018. What matters here is that BVOD is growing and it’s growing fast and that’s good for all the networks in Australia. That streaming space is going to get awfully crowded awfully quickly and a free offering is the way to go.

Will you have a long-term presence in print with The West and Pacific? The numbers seem to indicate advertisers are exiting quicker than the readers are.

We don’t need a partner for Pacific. Pacific is punching above its weight. From just 12 titles it has 26% of the market. [CEO] Gereurd Roberts and his team have done an extraordinary job of turning that business around. Our aim now is to hang on to a new level of profit.