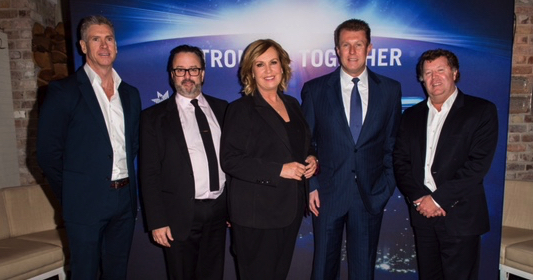 At midnight Southern Cross Austereo (SCA) switched on Channel 9 programming across Victoria, regional Queensland and Southern NSW. At the same time WIN TV turned on the Network Ten signals across its network to replace the Nine programming.

SCA CEO Grant Blackley was joined by senior Nine executives and talent in Sydney yesterday to celebrate their new partnership. The SCA Sydney event was one of 20+ separate gatherings right around Australia where the company invited their clients in to explain the change and showcase the new Nine content that is currently on air and to preview some of the programs to arrive soon.

At the end of the Sydney celebration, Gallagher and Stucci jumped on a plane to Melbourne where they hosted guests at an evening function at the Carousel on Albert Park Lake. (Interestingly also the location for the Heston Blumenthal Masterclass last night, one of the last programs Southern Cross broadcast under its affiliation deal with Network Ten.)

Guests from Nine at the Sydney event included managing director Amanda Laing, new sales chief Michael Stephenson, programmers and production executives Michael Healy, Andrew Backwell and Adrian Swift, news boss Darren Wick, analytics and insights boss Steve Weaver plus a handful of on-air talent including Peter Overton and Ken Sutcliffe from Nine News Sydney, news presenter and Weekend Today co-host Deborah Knight and Today show co-host Lisa Wilkinson. The person with perhaps the biggest smile on her face because of the new regional partnership was A Current Affair host Tracy Grimshaw who will see her program on air in all regional markets. The show’s weekday 7pm timeslot was previously occupied by WIN local news in many markets around the country.

“This is a historic moment in television for regional Australia.

“Never before has there been a change of affiliation between the networks, so this is a major achievement in itself and one worth celebrating.”

Blackley thanked his management and all the 2,500 SCA staff: “It has been a mammoth effort since we signed the agreement two months ago and will culminate with the switchover at midnight. We are not sure who is doing that, but I think someone has been booked in to do it.”

Blackley gave some insight into how internal teams were formed to map out the work that needed to be done ahead of the change. “In one week we created 80 rate cards and 45 new traffic schedules.”

The company commenced communications with 7,000 regional advertising clients and it reached out to 27 local MPs with an update about explaining the changes to their constituents.

SCA was also able to use 64 of its regional stations to spread the word to their listeners. The company also booked space in regional newspapers.

Blackley then joked about how they wanted to break the news to the Wollongong audience, the home of WIN TV. “We thought Wollongong was quite special. We were not sure of where Andrew or Bruce Gordon lived, so we took ads on the buses going around town.”

Blackley explained that NEC’s Hugh Marks was not able to attend yesterday, but Marks had deputised Scott Cam who introduced a Nine reel which featured among other things the new season of The Block.