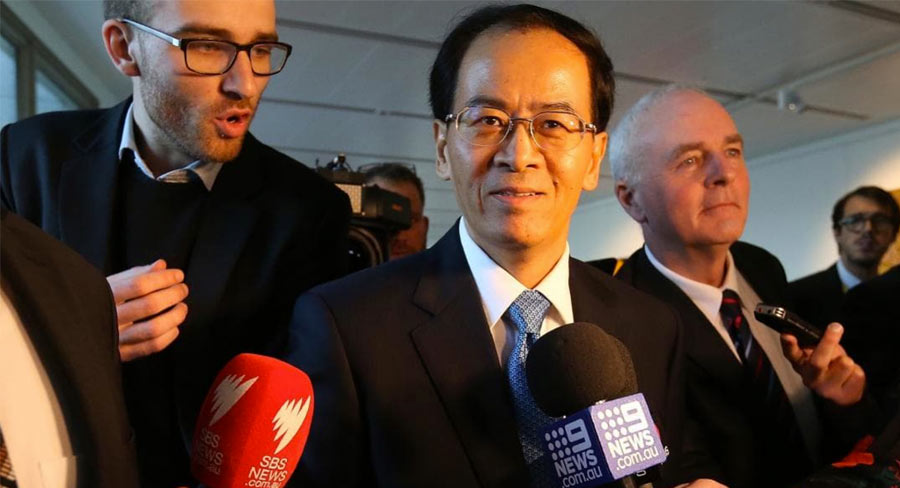 Graduating from his SBS cadetship at the end of 2016, Elton-Pym joined the Canberra team with a focus on radio, filling the shoes of the late and well-respected Amanda Cavill. Developing more cross-platform capabilities, he now files for SBS’s recently redesigned SBS News website.

We’re speaking at SBS’s narrow office in the press gallery, on the second floor of Parliament House.

“SBS still has a very proud ongoing and radio output… it’s still at the heart of how we reach our 68 foreign language groups.”

But audiences are increasingly expecting their news online. SBS News’s recent TV bulletin refresh has been paired with a new-look website and a new mobile app.

Brett Mason, SBS’s chief political correspondent, notes how the delivery of news has evolved to meet the needs and changing audience consumption habits.

“SBS has embraced the opportunities afforded by technology and while we’ve long been recognised for our nightly 6.30pm news, over the last 18 months, we’ve seen notable success with our digital-first model, where we’re breaking political stories online as a standard.

“The multiskilled bureau is delivering across platforms and formats, with digital stories regularly engaging thousands of Australians.

“To build on this audience appetite, we appointed a dedicated online journalist in James, whose focus is to bolster the team’s output of digital stories throughout the day,” he adds.

Elton-Pym explains the shift to digital has given him the chance to delve deeper into areas of immigration and cybersecurity.

“We’re breaking more of our own exclusives, particularly in the immigration space. Working alongside SBS’s Investigative Unit, we’ve reported a range of stories specifically around changes to visa policy,” he says.

“Take the Budget lockup – hundreds of reporters locked in a room for eight hours with thousands of pages of treasury papers. We came out of the lockup with five stories on immigration that were barely touched by anyone else.

“It’s amazing how well these stories do online. It’s like the antidote to clickbait. When you cover your patch really well, the audience takes note.”

The emphasis on digital has changed the breaking news game too.

“That’s why you can’t just hit publish and let your story live its life online. You can’t be too reactive but you do have to keep tabs on your stories and update them when you need to. If you don’t do it properly, you can risk accusations of bias.”

SBS News underwent a major facelift in December last year, which included a major set refresh, a graphic rebrand, a new website and an app.

“It is a nice big studio space and we wanted to give it some depth and it is the trend in Europe and the US that has been well-received by audiences,” SBS director of news and current affairs Jim Carroll told Mediaweek’s James Manning at the time.

“Pretty much every political story that I file has got a video element to it these days. Sometimes it’s a quick grab from a politician, sometimes it’s an animation that explains some political issue, but almost everything is multimedia in some way now.”

Working at the press gallery

“The press gallery has got this surprising camaraderie about it even though it is so competitive. We divide up filming jobs with some other broadcasters and we share a lot of it – there’s just too much going on around the building for any one network to cover,” Elton-Pym says.

He says some of the newsrooms have shrunk, especially the newspapers. But there are relatively new players in the gallery too. BuzzFeed moved in next to SBS’s radio office a couple of years ago.

Being a young reporter in 2018

James got his start in journalism working in Laos as a reporter, subeditor and freelance video-journalist before he finished his degree at UTS.

“That sort of got me into the craft of being a journalist,” he says. “Came back, finished my degree, did a whole bunch of internships with all sorts of different publishers – News Corp, The Guardian, Al Jazeera, Fairfax, you name it.

“There are few ways a young reporter can actually learn how to be a reporter. And they’re internships, basically. And even though it sucks, and it’s like ‘oh, a chance to do free work!’, in reality I was definitely an imposition on the first newspapers that took me in.

“But there are very few of those roles now, even since a couple of years ago. I started in local suburban newspapers… but the first one that gave me an internship in a newsroom doesn’t exit any more.

“It’s more of a shame for their readers who are missing out, but it is a shame for young journalists too.”