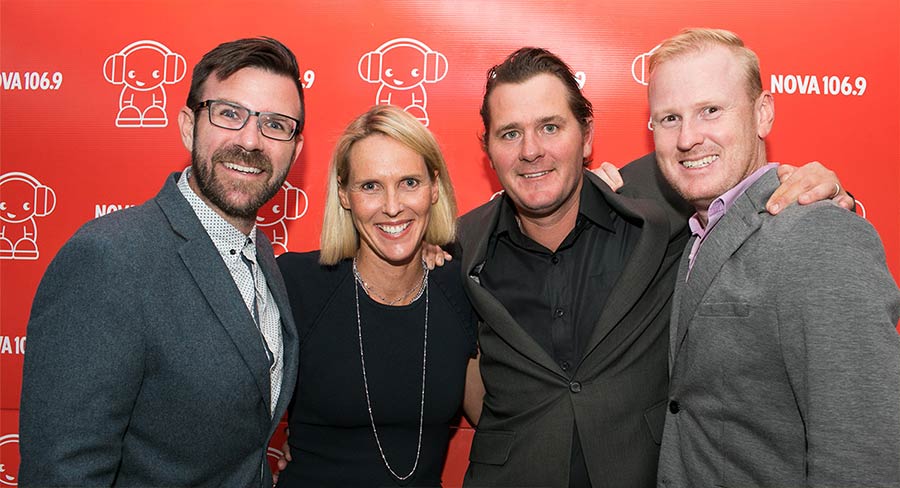 The Brisbane radio market has seen a number of changes in breakfast in recent times with new additions and subtractions to on-air teams. However, Nova 106.9 has held steady. The on-air breakfast team of Ashley Bradnam, Kip Wightman and David “Luttsy” Lutteral has stayed put for nearly a decade. Meanwhile, Susie O’Neill has been a familiar voice on the program for four years.

The changes to the show have been minimal, according to Samantha Rose, executive producer of Ash, Kip and Luttsy with Susie O’Neill.

She told Mediaweek: “It’s a very stable show. If we didn’t have that, it’d fall apart.”

This is perhaps the reason she can claim confidently that it is a show that “sounds very natural, like four mates having a chat. There is no fakeness.”

This virtue together with the stability factor has allowed the program to form a strong relationship with radio listeners in the Queensland capital.

Rose describes Brisbane as a “big country town”. Therefore, “localism is very important. People have been listening to Ash, Kip and Luttsy for the last eight or so years. They feel like they know them and have a connection with them. In other markets, listeners are bombarded with new shows all the time, so they may not have the connection that we can build with our listeners.”

Over the last two and a half years, the days that O’Neill is heard on the show have gradually increased. Currently, she is on four days a week. Her voice injects a “female filter to the show”, Rose said. “Each of the announcers brings something different to the table that makes our audience quite broad.”

Rose said: “The ratings are important for us to know that we are on track. It’s a good guide, but we want to be real to who we are.

“We don’t go, ‘Oh, we are a bit low in this demo. We need to appeal to more of them so let’s change everything.’ That’s worked for us.”

Talking about her role as the executive producer of a program in one of two key timeslots, Rose admitted, “It does come with some pressure because everybody wants to be #1.

“I am very blessed to have a team that really understands radio. We all really work together to deliver the show.

“I see myself as a coach who is guiding them along the way.”

Rose admits that the Nova 106.9 breakfast team is “pretty big” compared to the sizes of some breakfast teams around the country. Apart from the four presenters, there are six other people working on the program behind the scenes including Rose.

She said: “With the speed of social media, you can produce something very amazing, but the next day it can be gone and the next big thing is here.

“The challenge is prioritising and working out what’s going to work and what’s not.”