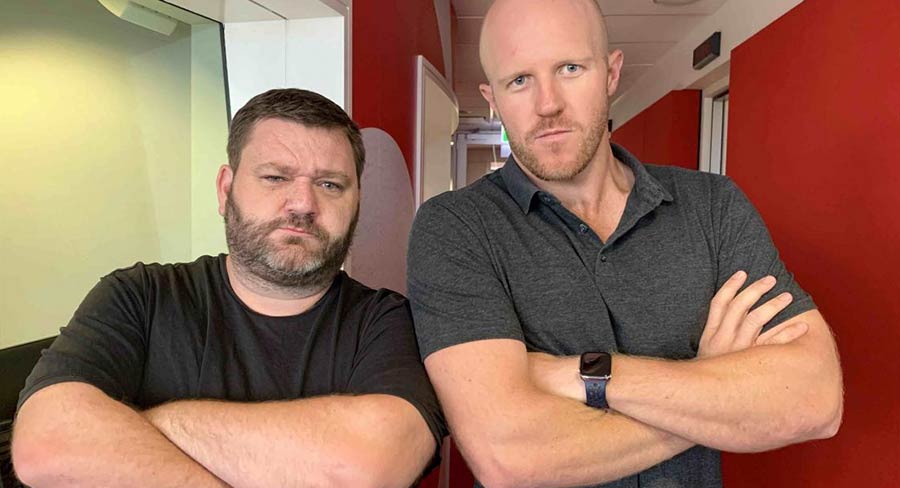 Last year de Groot was the winner, but in a surprise upset, the overworked judge, Nova breakfast team member Sarah McGilvray, initially said it was a draw, but then awarded the bout to Murray.

De Groot and McGilvray start a new Sydney breakfast show tomorrow so it might get a bit tense on air.

Was de Groot robbed? You be the judge. Here are the lyrics to both raps and a link to the video.

For the second time, Paul, we go toe to toe…
For the second time Paul, you’ll be trounced on this show…
For I am lamb, and you are mutton – and this will go as well as your backing Peter Dutton
If you know that story you will be fine – but if you don’t sit back and let me rewind…
See, Paul had a group of right wing peers – who were tired of their anger falling on def ears…
For they loved Australia and they’d had a gut full, of this lefty-twit called Malcolm Turnbull…
So they rose as one and they shouted with rage, determined to send us back to the stone age
But the problem was it was all for naught – cause they backed a bloke who looked like Voldemort
But like Harry Potter and his magical crews – there’s a squad for you here, forget Sky News
Got an out of touch king sitting on his throne – who thinks we care about is his bloody drone
A middle aged lizard who’s not a bad fella – but needs to stop going to Coachella…
A sweet blonde girl who gave a free kick – when she talked about gnawing on a meat stick
And our old mate Tom the hairy Bin Chook – Who’s on the cover of “Pathetic guidebook”

Watch out you Muppets, I’ve arrived
I’ve got more power than you inside my thighs
This show speaks to a generation
It’s a shame the generation have all switched station
Fitzy and Wippa – what a laugh
The biggest joke is how long your contract lasts
You sit in here on a big income
You’ve got more holidays than an unemployed bum
Fitzy’s been on air for nearly 14 years
But you slur your words like you’re on the gear
And Christmas hams – Wippa had so many
You’d do a health kick but your legs are too heavy
Matt’s getting hitched so he’s been shredding
Bronte broke her foot to avoid the wedding
She’s stuck now in a moonboot
I’d prefer a broken foot than be married to De Groot
Matt had nasty surgery in the past
Didn’t want to bring it up but Matty did ask
Now his little friend’s as thin as a thread
Shame they couldn’t remove the D from your head