• The once a week episodes will feature news updates from The Chaser World News Headquarters.

The Chaser returns, this time at Nova Entertainment The Chaser Report is a new podcast that sees the group of comedians and broadcasters moving from SCA to Nova Entertainment. The new series launches on Friday April 17.

“In an age when you don’t know who you can trust when it comes to news, we have come up with the one news podcast that definitely can’t be trusted under any circumstances,” The Chaser’s Dom Knight told Mediaweek.

The once a week episodes will feature news updates from The Chaser World News Headquarters.

The break from SCA comes after The Chaser left Triple M Sydney where the afternoon show they were doing rated well, but Triple M didn’t seem to have a timeslot for the daily comedy show. Knight said the break is significant: “SCA was the first organisation to ever pay The Chaser for performing. We had a late night show on Sunday nights. We learnt a lot from working with Triple M on the afternoon shows and we won an ACRA against some breakfast and drive shows. Nova do some great stuff and doing a podcast with them is a way to dip our toes in the water. After flirting with them in the past, this feels like a structured date.”

Working alongside Knight on The Chaser Report are Charles Firth and Andrew Hansen. They will be broadcasting from their homes, with Hansen online from Melbourne where he has been based for a few years. Expect special guest appearances from their colleagues Craig Reucassel, Chris Taylor and Zoe Norton-Lodge. 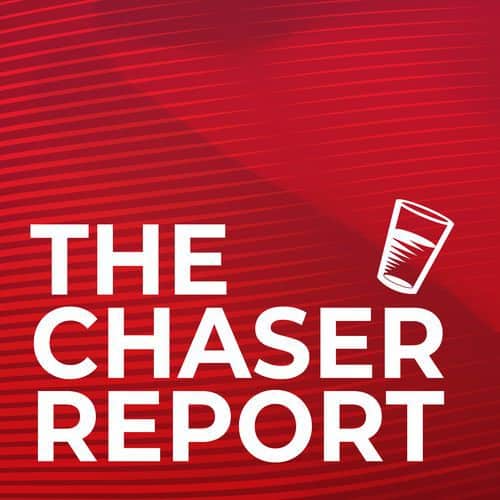 Knight is still on call at Triple M and a recently hosted a Night Shift show for Luke Bona and he also bobs up occasionally on ABC Sydney where he hosted the NSW evening show for four and a half years. He also helped out on air when needed during the bushfire crisis over the summer. Hansen stands in at ABC Melbourne when required, most recently filling in on breakfast.

Knight explained: “The ABC evening show is the most fun show to host, but quite gruelling in terms of family. When I finally convinced someone to marry me, in my late 30s, I thought it would be good to actually see her from time to time!”

You can expect Knight to follow the escapades of President Trump on The Chaser Report. He wrote a book two years ago called Trumpedia. “His presidency has turned into a total tragedy. It is one thing to have a person who has a tenuous grip on reality when things like the economy are going well, but when it comes to ignoring medical advice it is terrifying. We will be making jokes though because he is an enduringly amusing subject…and much more entertaining than Joe Biden.”

Andrew Hansen is one of The Chaser team who works the corporate events circuit. While live appearances have dried up, Hansen is still working on Zoom. Knight noted that The Chaser Report and Nova Entertainment are also working on a few Zoom projects. “I feel really sorry for everybody in the live comedy world. Both Andrew and Charles were going to have Comedy Festival shows this year and it is sad I was unable to go down and boo them from the audience.”

Listen to The Chaser Report here.

iHeartPodcast listening up 38% in March 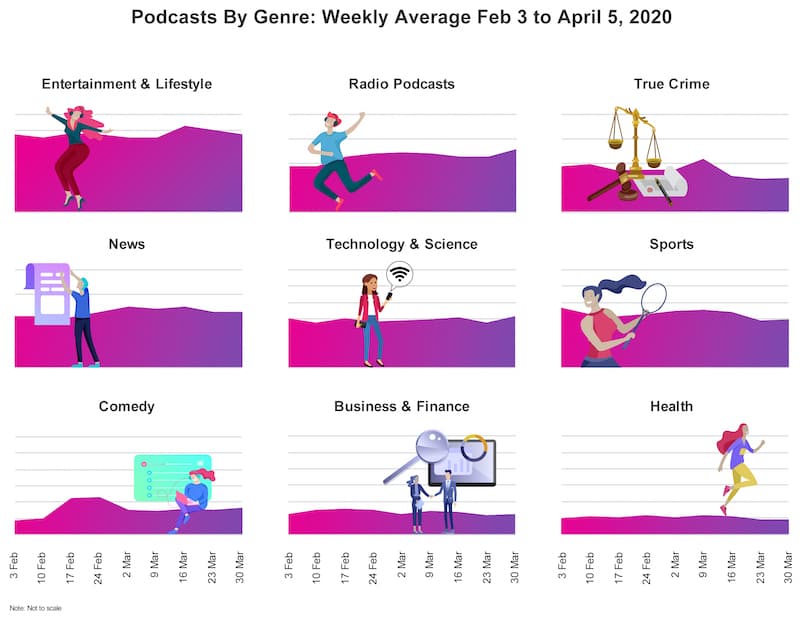 ARN this week revealed data showing an increase in audiences across its on-demand radio, music, digital and podcast platforms. The period covered is March 2020 compared to February 2020.

The broadcaster reported a 38% increase in time spent listening to podcasts on its iHeartPodcast Network Australia.

ARN collaborated with podcast hosting service Megaphone to review the listening habits of over 600,000 Australians. This demonstrated that overall podcast downloads have increased by 15% since COVID-19 was declared a global pandemic and there has been a three-fold growth in listeners accessing coronavirus related content.

ARN’s commercial product and audio partnerships director Corey Layton said: “This research shows that growing numbers of Australians are using podcasts to connect with COVID-19 content that tells the stories behind the headlines, or engaging with aligned content that entertains us, like Australian comedian Nazeem Hussain’s Survivor’s Guide to Coronavirus.”

The Megaphone data also exposed shifting trends in the time of day that Australians are consuming podcasts. Up until the pandemic was declared, podcast listening trends peaked in line with morning and evening commutes. With working from home now the new norm, consumption remains relatively constant across the day with a sharp increase in listening between 11am and 1pm. 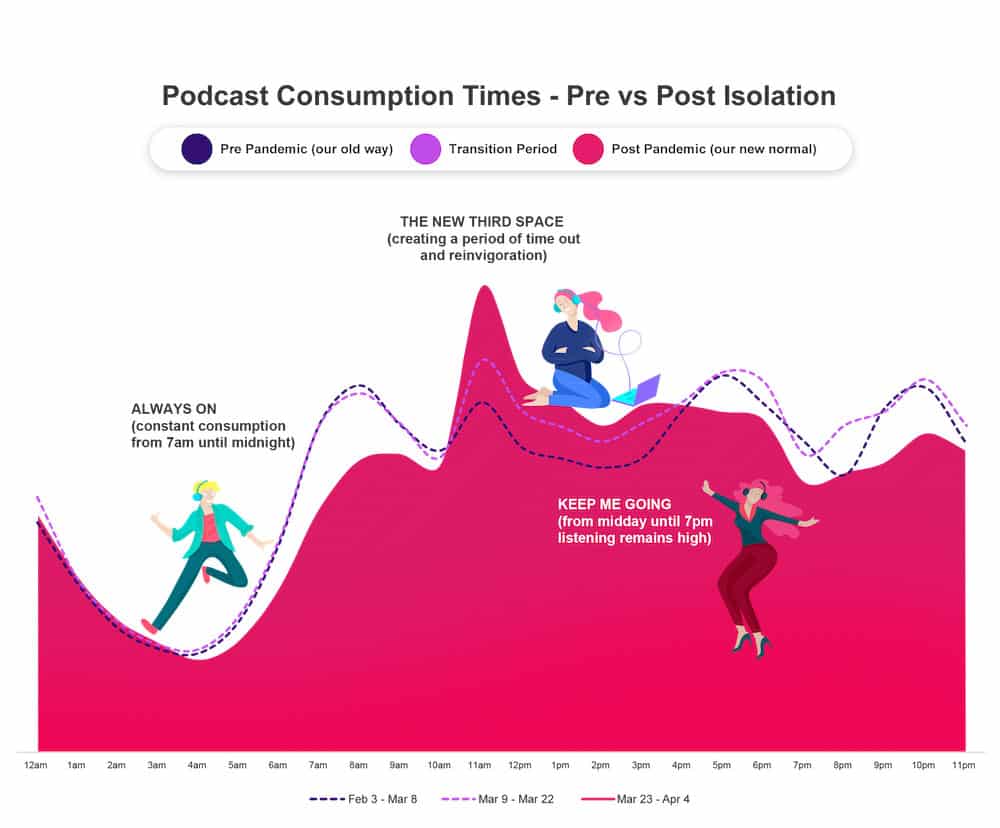 On the shift in podcast consumption times, ARN’s national strategy director Lauren Joyce said: “With many Australians no longer commuting, people are establishing a new routine. Without the distinct breakers between home, work and ‘me’ time, they are turning to the intimate listening experience of podcasts to carve out this ‘third space’. For advertisers this provides a unique opportunity to tap into audiences during the moments that they are actively seeking out content while they are highly engaged and uninterrupted.”

ARN chief commercial officer Pete Whitehead said: “ARN continues to be committed to offering the very best content across all of our audio platforms – whether it be radio, music or podcasts. We know that while our audience’s day-to-day behaviours might be shifting, they are consuming radio to remain connected, they’re on digital to stay engaged, and are listening to podcasts to escape. Their day might have changed but their appetite for audio hasn’t.” 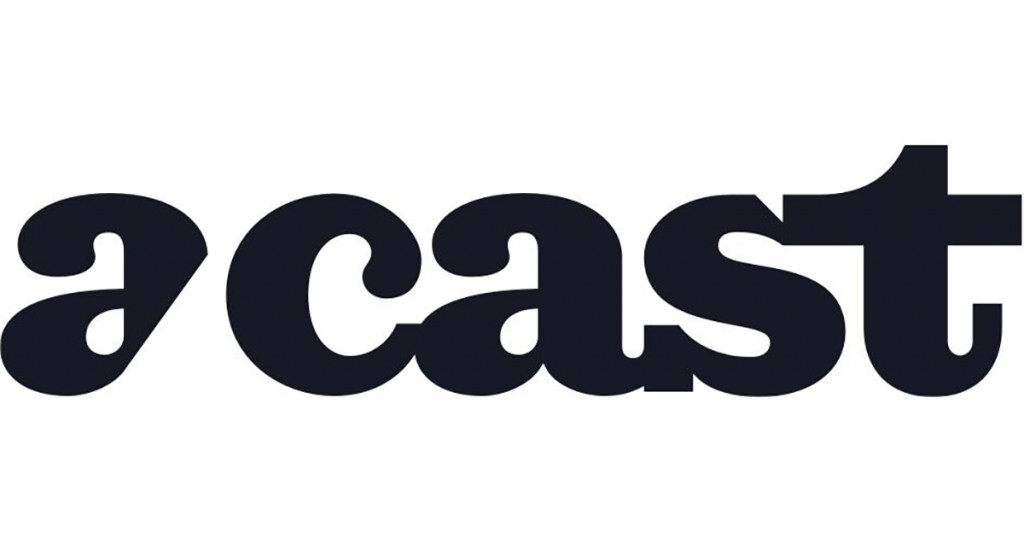 Acast has launched “Staycast”, a new campaign encouraging people everywhere to stay at home during the coronavirus pandemic by offering podcast-based inspiration and entertainment from a wide range of popular podcasters.

Listeners will hear messages of support (or “Staycasts”) across thousands of the network’s shows from some of Acast’s top podcasters – including Osher Günsberg, Georgia Love and How I Work’s Dr Amantha Imber – as they remind people of local government advice, as well as giving recommendations of other podcasts to listen to while they do so.

Dedicated Staycast collections on the Acast app will also provide listeners with recommendations for shows and episodes to relax, escape, or keep up to date on the latest coronavirus developments.

Trials on Acast’s Open platform – which helps people set up a podcast for free – are booming, increasing by nearly half (+49%) in March versus February. Acast will be encouraging even more people to get podcasting at home with a dedicated Staycast promotion, offering three months’ free access to any of its paid tiers.

The past three weekends have been record-breakers for the Acast network – with weekend listens up +13.5% overall. The month of March also saw a record 23 million listens of Acast content in Australia.

Acast’s content director for Australia and New Zealand Guy Scott-Wilson said: “It’s clear, though not surprising, that during this time of crisis and self-isolation people are turning to podcasting in increasing numbers. We’re seeing huge increases across a wide variety of content – from News and Finance to Health and Wellness, Education and Comedy.”