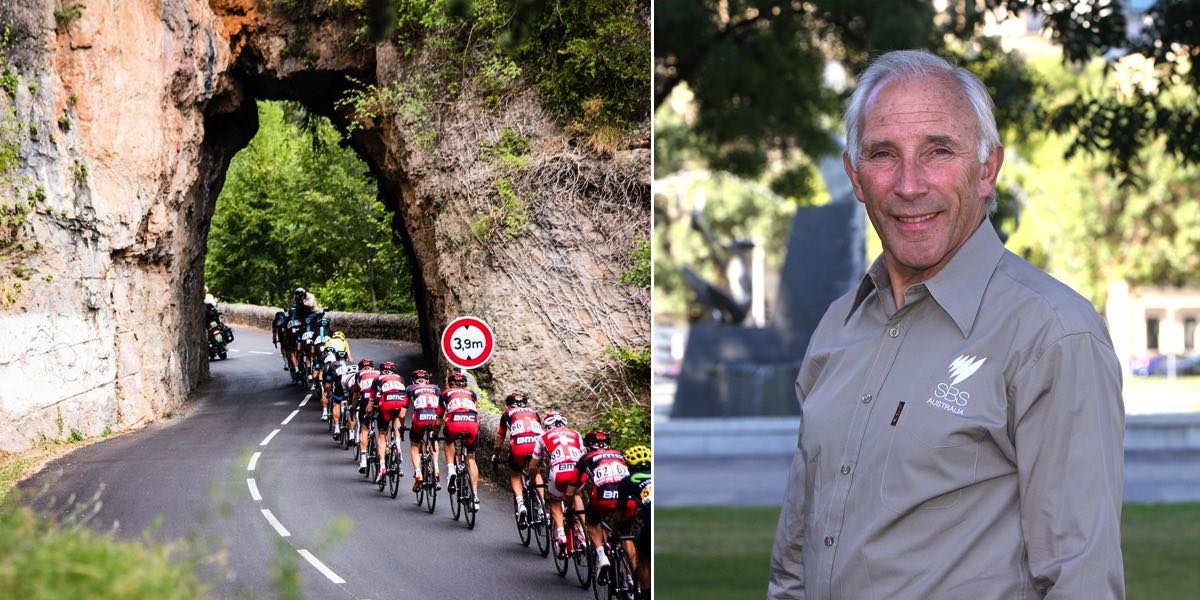 Meet the voice of cycling Phil Liggett: ““I have never actually asked for a job in television”

The man who will keep many Australians up late from July 2 to July 24 next year during the Tour de France was in Australia this week doing his first live events for the promoters Lateral Events and SBS. Cycling broadcaster Phil Liggett, dubbed “The Voice of Cycling”, was on stage with three cycling greats in Sydney on Wednesday night and then in Melbourne on Saturday night.

Lateral Events is the company run by CEO and creative director Simon Baggs and it is the promoter behind the inaugural L’Etape Australia race by Le Tour de France which is being held this December.

Speaking to Liggett shortly before the Sydney event, he told Mediaweek the success of this speaking tour might lead to others. He is no stranger to live audiences though, having done a fair amount of corporate work and also some campus dates.

Liggett initially declined the invitation to appear as it clashes with his holiday time in the sport’s off-season. “When I heard about the format I started getting excited. I asked them for time to go and speak with my wife because I really want to do this.”

The show is timed to run for about two-and-a-half hours and will include lots of video highlights.

Such is Liggett’s schedule he never hangs around for long in a country when his duties are over. He will be leaving Australia on November 22, “before my visa expires!”

“I have never
actually asked for
a job in television”

As to the time he usually gets off, Liggett said cycling has virtually become a 12-month sport. “I have a farm in the bush in South Africa and it has been suffering pretty badly from a drought. I am also the head of a rhino organisation and we are trying to save the animals from extinction.” Liggett’s wife Trish is one of the trustees of the organisation called Helping Rhinos. Also on the team is Bear Grylls who is a patron of the organisation.

“If I am not doing bikes I am doing animals. Between the two that is my life.”

Liggett’s year starts in Australia every January now with cycling events that weren’t very significant at all on the global calendar at the turn of the century.

“That has all changed,” he said. “The Australian summer of cycling is in Victoria and South Australia that starts with the Bay Classic on January 1 around Melbourne and Geelong. Then there is the National Championships around Ballarat. The big one is the Santos Tour Down Under in South Australia which is the first big event on the world calendar for the year. Next is the Cadel Evans Ride which started last year. Finally is the Herald Sun Tour which is Australia’s oldest stage race. All the riders then move towards Europe via places like Qatar and Oman. The World Tour then doesn’t end until October.”

Liggett works for the Nine Network on their coverage of Santos Tour Down Under while he is employed by Seven for their coverage of the Cadel Evans Ride. “I spend New Year’s Eve in Australia which I have done for the past few years. I will also be working for Seven at the Olympic Games in Rio.

“Cycling has taken off on all of the networks, not just in Australia. They are all having to learn a new sport and cycling is a very difficult sport to cover. They are not just going around in circles. They are going out into the countryside which means helicopters and that is very costly.”

Liggett noted that much of the coverage now is also about selling the host country to viewers all around the world. “The Tour de France is not just a bike race. They now have the government behind it and they are selling the country as well.” He noted that since the Tour started in Yorkshire in 2014 there are now massive crowds for a separate event Tour de Yorkshire.

“It was amazing how the English people took it to their hearts. Betty’s Café in Harrogate is jam-packed and is known all around the world after the Yorkshire tour virtually finished right outside the front door.”

On call at the Rio Olympics for both NBC and Seven, Liggett explained organisers try to ensure that no World Tour events clash with any of the major games, be they Commonwealth Games or Olympic Games. “Rio will go very close to the US Pro Road Race in Colorado this year, but it is just possible to compete in both. I remember one year when Australian Kathy Watt won her Gold Medal I was packing my bags in Paris for the trip to Barcelona and on the TV I saw Watt on the podium. There was a bit of an overlap.”

Most of Liggett’s work is done on road racing. “I have to do a bit of homework for track racing because I only do that now every four years.”

>> The voice of cycling

Liggett says the title was given to him by the late Australian sports broadcaster Stephen Phillips in Auckland in 1990 at the Commonwealth Games. “I did a cross to him in Auckland and he said he was going to be speaking to the voice of cycling and then it went around the world.

“I sometimes feel a bit of pressure because I am getting older now. I won’t be going much longer!

“There is plenty of other talent coming through. I have one thing they don’t though – a memory.”

Liggett updates his filing system often on his computer with files on competitors and the major events. “I update those every day of my life.”

“I have never actually asked for a job in television,” said Liggett. “ITV called me originally, then CBS, then the Australian networks.”